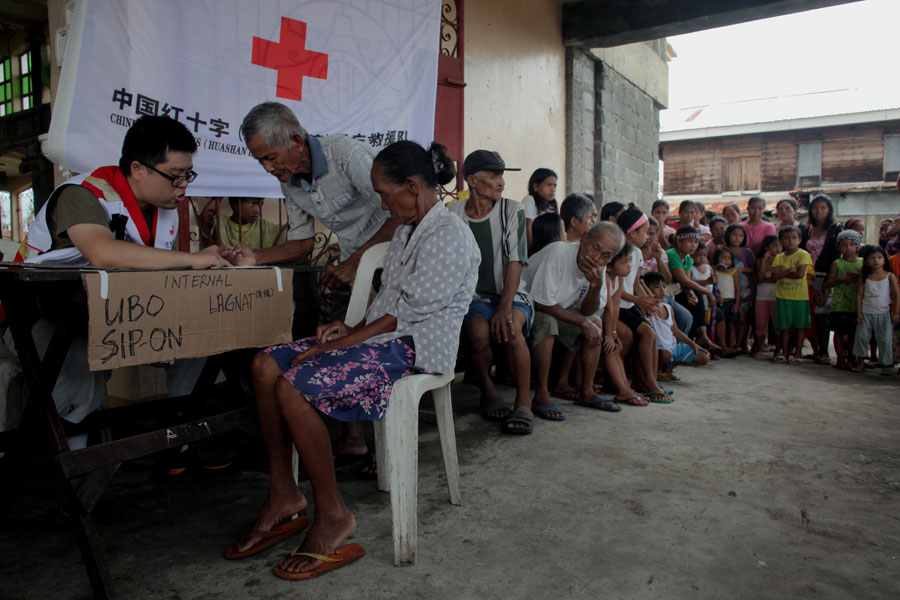 A medical team organized by the Red Cross Society of China provides help to residents of the village of San Jose in Dulag, the Philippines, after a typhoon struck the village in November 2013. (Photo: China Daily)

Gu Bin, a member of the Chinese Red Cross Foundation, has been to many countries, including Pakistan and Iraq, to help with humanitarian assistance projects, but she likes Afghanistan the most.

"I have been to Afghanistan four times," she said. "Although some areas are still in conflict and quite dangerous, we feel humanitarian workers like us are most needed there."

One of her visits to the country was in April last year, to help carry out a joint program between the CRCF and the Afghanistan Red Crescent Society. Through the project, Chinese medical experts screen children in Kabul for congenital heart diseases. The experts choose the most serious cases and send these children, who are referred by local Red Crescent branches, for free treatment in China.

"I was shocked to see so many children waiting in line with their parents and relatives outside the clinics to see the doctors," she said.

Although congenital heart diseases are usually identified and treated very early in China, some of the patients waiting for screening are more than 10 years old and had not been diagnosed previously due to a lack of access to health care services, Gu said.

"Though the diagnosis was free, many of the children recommended by local Red Crescent branches are from outside Kabul and did not manage to arrive due to problems such as transportation," she said.

By November last year, 100 Afghan children with congenital heart disease had received free medical treatment in China through the project, according to the foundation.

In May, a medical team of 13 organized by the Red Cross Society of China arrived in Kabul again, marking the beginning of the project's second phase. It is expected that an additional 150 Afghan children with congenital heart disease will be selected after screening in Kabul and then sent to hospitals in China for treatment, said Liu Xuanguo, vice-president of the CRCF.

In addition to Afghanistan, the foundation has provided humanitarian assistance to 26 countries in Asia and Africa in recent years. Among the projects, it has established emergency centers in Pakistan, provided free diagnosis and treatment to children with congenital heart disease in Afghanistan and Mongolia, built a blood dialysis center in Bangladesh, constructed mobile hospitals for Syria and Iraq and donated rescue vehicles in Cambodia and Laos, he said.

"Most of the programs have been carried out since 2017, following the proposal of the Belt and Road Initiative (in 2013)," Liu said. "Humanitarian assistance is badly needed in many countries involved in the initiative. Although much smaller in scale compared with international assistance delivered by the Chinese government, China Red Cross humanitarian assistance has played a very important role in promoting friendship between China and these countries, and emotional connectivity between different peoples."

For example, a foundation project that has provided free treatment in Chinese hospitals over the past two years to 100 Mongolian children under age 14 with congenital heart disease has won high praise from the Mongolian government and was recognized as one of the best humanitarian assistance projects in the country last year, Liu said.

In June, another Chinese medical team arrived in Ulaanbaatar, the capital of Mongolia, to screen around 100 of the most urgent cases of congenital heart disease for free treatment in Hohhot, the capital of the Inner Mongolia autonomous region, and in Wuxi, Jiangsu province.

In neighboring Pakistan, an emergency center established by the foundation in Gwadar in cooperation with the Pakistani Red Crescent Society has also won the praise of locals, Liu said.

As of the end of April, three medical assistance teams sent by the Red Cross Society of China had been to the center in Gwadar since its establishment in September 2017. Large numbers of Chinese employees work there to assist with various projects.

Liu said that after the center was set up, most of the patients were Chinese employees working at Chinese companies in Pakistan, but now more than 80 percent of patients are Pakistanis.

The foundation also planned to build a similar center in Pakistan's Balochistan province last year, but the plan was delayed due to security concerns. However, the center is likely to be opened this year, Liu said.

The foundation also plans to build more of these facilities to meet local demand for medical care and emergency services, but obstacles such as the threat of terrorism remain, he said.

On May 11, a five-star hotel in Gwadar, Pakistan, was attacked by terrorists, resulting in four hotel employees and a soldier being killed. Yan Yibing, a member of the CRCF, said the attack occurred just a few hundred meters from the emergency center where he and his Chinese colleagues worked.

"I had never heard gunshots before, and at first I thought it was firecrackers," he recalled. "Then we heard people shouting outside and realized an attack happened. We were very frightened, and none of us dared to make a sound."

Liu said the emergency center has been reinforced to make it more secure for medical and Red Cross staff members working there.

Global demand for humanitarian assistance is huge, so China will intensify its contribution, Liu said.

In Afghanistan, for example, the number of children with congenital heart disease registered with local Red Crescent societies exceeds 7,000. In Iraq, it is estimated that more than 10 million people need humanitarian assistance, he said.

"We will intensify efforts and try our best to deliver more international humanitarian assistance to help more people," Liu said.