LANZHOU -- A herd of nearly 100 wild red deer, under China's state protection, have recently been sighted in Qilian Mountain National Park in Northwest China's Gansu province, according to the park administration. 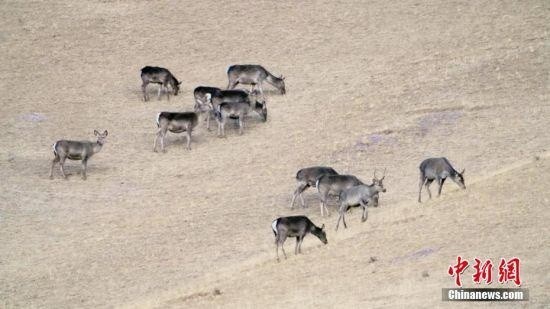 A herd of wild red dear forage on a pasture at the Qilian Mountain National Park in Northwest China's Gansu province on Feb 5, 2021. [Photo/Chinanews.com]

Staff with the park spotted the deer on Feb 4 when patrolling an area at an altitude of about 3,000 meters. Some of them were foraging on a pasture, while the others were running uphill and jumping over fences.

Yang Wanbin, a ranger with the park administration, said the frequent sightings of red deer and other wild animals in the park show the area's improving environment. It is the result of a spate of conservation projects, including banning grazing and turning farmland back to forests.

The red deer, under China's second-level state protection, are mainly found in alpine forests and grasslands in northern China, including Inner Mongolia autonomous region, Xinjiang Uygur autonomous region, and the provinces of Heilongjiang and Gansu.