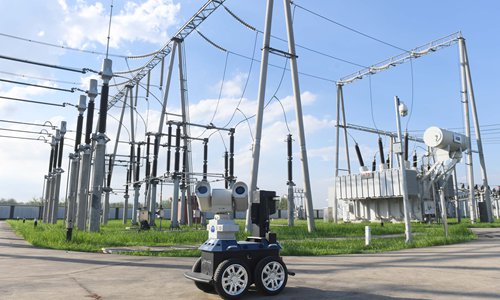 A patrol robot conducts an inspection inside a power grid facility in Chuzhou, East China's Anhui Province, September 24, 2019. Equipped with a high-definition camera and infrared thermograph technology, the robot makes life easier for facility employees by checking grid equipment 24/7, especially in extreme weather conditions. The Chinese robots market will be worth $77 billion by 2022, according to a report released by the International Data Corp in August. (Photo: VCG)

As the tapestry of China's industrial development into the world's factory in the past 70 years unfolds, the relentless pursuit of the Chinese working class, the changing demand of the Chinese consumers and the pursuit of homegrown technologies by Chinese companies dominate people's thoughts, analysts said on Thursday.

A struggle over seven decades saw the Chinese people build from near bare-handedness one of the world's most extensive industrial systems, snatching the laureate of "world factory" - a title once enjoyed by the British, then the Americans.

At the beginning of this journey, the country's workers had to face jeers from foreigners, the experts noted.

At the Jinzhou Petrochemical Plant, in the 1940s, the retreating Japanese occupants refused to carry out a scorched earth policy ordered by their superiors, honestly believing that an industrial plot, in the hands of Chinese, was only good to grow crops.

Under the similar situation, the country's workers churned out the first barrel of oil in the 1950s. They even hit a massive oil reserve at Daqing in Northeast China's Heilongjiang Province, throwing away for good the label "oil-weak" country. The Daqing Oil Field celebrated its 60th birthday on Thursday.

Today, the refurbishers of Brooklyn Bridge sourced steel from China.

After 70 years of development, particularly since the beginning of reform and opening-up, China's industry has successfully achieved a historical leap, lifting China to the world's largest industrial manufacturing country from a poor and lagging agricultural economy.

"China has become the only country in the world that has all the industries listed in the United Nations industry classification system," Miao Wei, head of the Ministry of Industry and Information Technology, said at a recent press conference dedicated to the celebration of the 70th anniversary of the founding of the People's Republic of China (PRC).

"China obtained the 'only country' status in industrial complexity due to its own efforts, correct development path, the wave of globalization and deindustrialization of the West taking place after the 1970s," Cong Yi, a professor at the Tianjin University of Finance and Economics, told the Global Times on Wednesday.

A country that could produce only a few daily consumer goods such as fabric, matches and soap now supplies industrial goods to the world and assembles the most sophisticated technology products, such as hand phones and airliners.

"China becomes the only major populous country in the world to become successfully industrialized," Cong said.

Industries and companies have flourished and died through their choice of different development paths.

Once upon a time, the trendy thing for Chinese companies was to be an assembler for foreign suppliers: Assemble and make quick cash.

An entire legion of companies following such a doctrine was wiped out during decades of competition.

Those who bet on homegrown efforts faced a different fate. Some, such as telecommunication equipment maker Huawei, became one of the world's best companies.

"The lessons abound." Cong said. "From the Soviets withdrawing all their aid experts overnight, to the absorption of high-speed railway knowledge from four leading developed countries, to the trade war, the homegrown path validated itself."

China's industrial development is also facing foreign challenges today, such as the US targeting China's "Made in China 2025" industrial plan and a series of high-tech firms including Huawei during the trade war, said Jin Canrong, associate dean of Renmin University of China's School of International Studies in Beijing.

In previous industrial revolutions, Western countries like Britain and the US were playing the lead role and that's why they were enjoying the benefit and unshakable international positions, Jin noted.