A giant flag of the Communist Party of China hangs outside of a department store in Shenyang, Liaoning Province, on September 26, 2017. Photo: VCG

"Communists can sum up their theory in one sentence: Eliminate private ownership." When Zhou Xincheng, a professor of Marxism at Renming University of China, emphasized this in his recent article in Qizhi, a Party theoretical journal, it immediately attracted attention and controversy. Giving Qizhi's background and affiliation with the Party and the timing of its publication - right before the country prepares to celebrate the 40th anniversary of its reform and opening-up - many are concerned that Zhou's article might signal regression.Some private entrepreneurs are now "extremely worried" and think this article may be a tip-off; "they feel a strong sense of uncertainty," according to a follow-up article in news outlet San Tiao."Entrepreneurs are not the only group that felt a chill reading Zhou's article. Ordinary people who own private property through their own hard work can't stop worrying about 'eliminating private ownership,'" read the article.Su Wei, a professor at the Party School of the Communist Party of China (CPC) Chongqing Municipal Committee, told the Global Times that people's concerns over Zhou's article is "unnecessary" and that China's leadership will continue to deepen reform for people's welfare."Despite some leftist groups and opposition among certain interest groups, looking at the bigger picture, reform is supported by most Chinese people," he said. 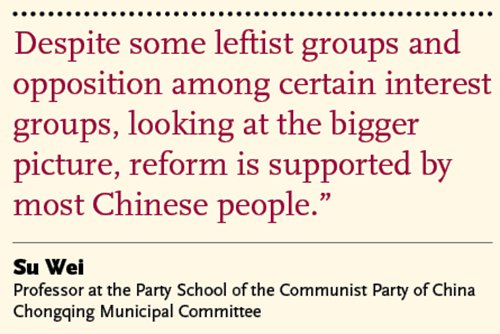