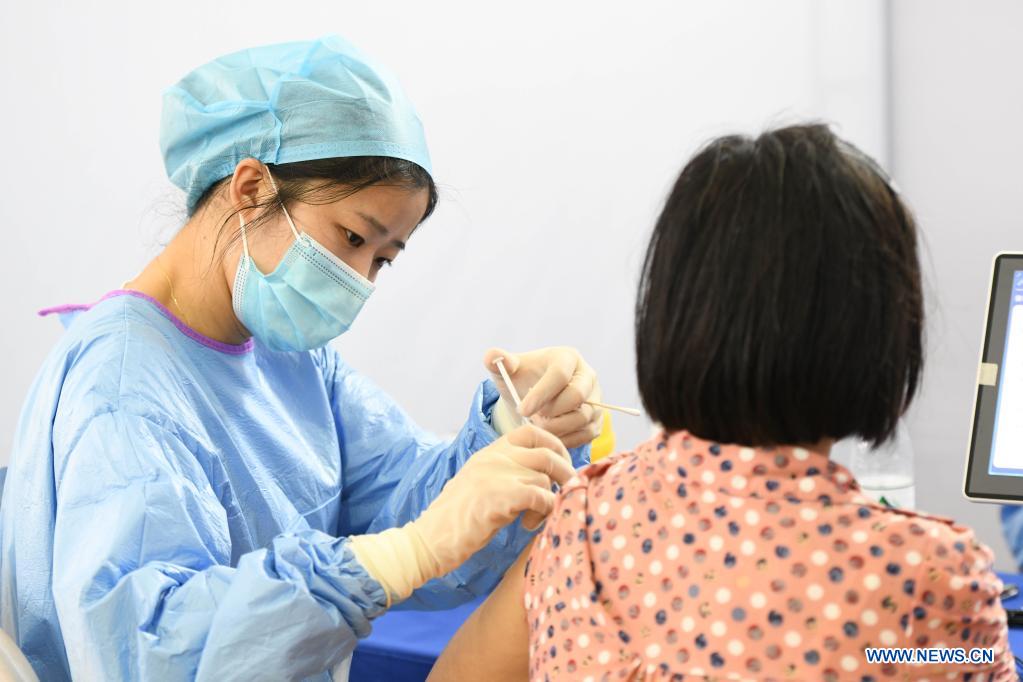 A woman receives a dose of COVID-19 vaccine at a vaccination site in Shushan District of Hefei, East China's Anhui province, May 15, 2021. (Photo: Xinhua)

However, they also warned that a lack of awareness in some areas about the severity of the virus could hinder progress toward herd immunity, which is expected to be achieved by the end of this year.

The regional gap in the country's mass vaccination campaign is a natural outcome of its staggered immunization approach, deepened by temporary constraints on production capacity and varying enthusiasm for getting vaccinated, they said.

"Our immunization plan that prioritizes distribution to large cities and port areas, as well as speeding up inoculating workers in the healthcare and public service sectors is reasonable and feasible," said Zeng Guang, chief epidemiologist at the Chinese Center for Disease Control and Prevention.

Some areas are likely to fall behind at the moment due to limited supplies, but China's step-by-step approach is well planned and will be bolstered by expanding production later this year, he added.

Feng Duojia, chairman of the China Association for Vaccines, said sufficient supplies are the prerequisite for speeding up immunization. He added that China has consistently ramped up production capacity. The recent scaling up of production has been spurred by an acceleration in the pace of vaccinations, fresh local outbreaks and growing global demand for domestically made products.

Duan Yufei, head of the Guangdong Health Commission, said the province had classified areas under a three-tier system based on whether they are port cities, their inoculation capacity, and the level of population mobility and frequency of foreign exchanges. The province's five largest cities are designated as first-tier areas for vaccination.

"When supplies are not very large, we focus on guaranteeing vaccines in the first-tier areas. And when supplies grow, we deliver more vaccines to areas in lower tiers," he said. "Key areas and high-risk groups should receive vaccines first."

As of Monday, 527.25 million vaccines had been administered nationwide, according to official data.

In Shanghai, 51.4 percent of local residents had received at least one dose as of May 17.

Dalian, a port city in the northeastern province of Liaoning, said nearly 70 percent of its permanent residents, or about 5 million people, had been given at least one dose as of Monday. Twenty-five counties and cities in Yunnan province, which borders Vietnam, Laos and Myanmar, had also vaccinated 97 percent of their 4 million target group, according to official data.

Experts said there is also now a heightened sense of urgency to get vaccinated due to the realities of recent local and overseas COVID-19 outbreaks.

"From the raging outbreak in India to sporadic local infection clusters, their impact on lifting the willingness of Chinese people to get vaccinated is huge, especially in areas recently affected by the virus," said Liang Xiaofeng, vice-president of the Chinese Preventive Medicine Association.

Dalian and Ruili have each experienced at least two local outbreaks in the past year. Anhui province in East China has been battling a small-scale outbreak since May 13.

Local officials said daily inoculations broke records on May 16, with 1.18 million doses given, up 40 percent from the daily average recorded for the previous week.

The rise in enthusiasm for inoculations has spread nationwide. "The number of days that it took for China to administer 10 million doses has greatly shortened," Shao Yiming, a researcher at the China CDC, said in an interview with Xinhua News Agency.

It took just seven days to achieve the 500 million threshold from 400 million doses, data from the National Health Commission shows.

In Gansu province in the northwest, only about 5 percent of the population had received a first dose as of the middle of this month. The rates in North China's Shanxi province and Ningxia Hui autonomous region in the northwest were also lower than 25 percent as of mid-May, official data shows.

"Of course, we do not hope to see sluggish paces in some regions compared with the national average," Shao said. "We should be tense, but there is no need to panic as vaccine supplies are sufficient and production capacity will speed up gradually."

Zeng Guang, from the CDC, said more efforts should be made to create a sense of urgency among the public to get vaccinated.

"If a proper understanding of vaccines regarding their safety, efficacy and urgency can be built up in wider regions, I do not think we will even need tactics such as giving free gifts or bonuses to lure people," he said.

"In the meantime, health departments should plan and coordinate vaccination work meticulously," he said in a recent interview.