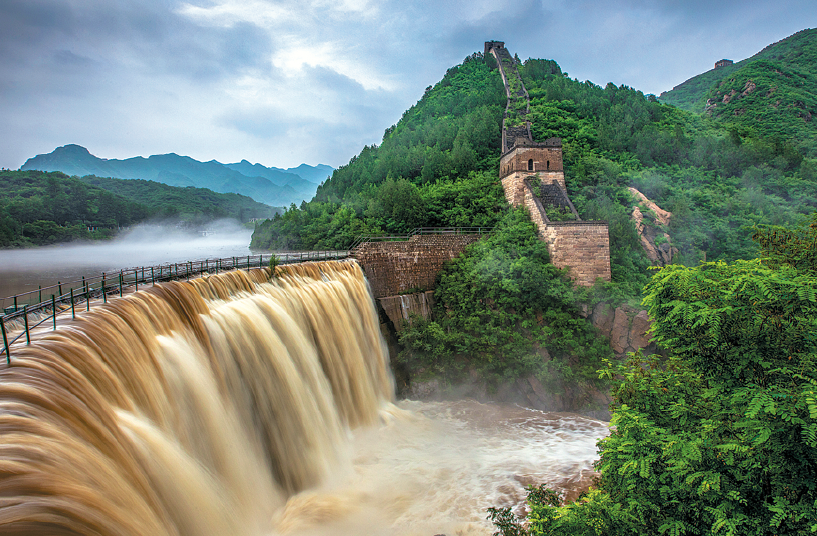 A magnificent waterfall is seen at the Huanghuacheng Great Wall Reservoir in Beijing's Huairou district on Sunday after heavy rain battered the capital. (Photo: China Daily)

Officials have called for a high flood prevention alert as heavy rainfall has caused natural disasters nationwide and is forecast to continue.

From Monday afternoon through Wednesday, torrential rainfall, which began in northern China in early July, will move southward to Henan, Yunnan and Guangdong provinces, according to the National Meteorological Center.

Typhoon In-Fa, which was approaching southeastern China on Monday, is poised to lash the provinces with more precipitation, the center forecast.

The Ministry of Natural Resources said that from Monday to Wednesday, heavy rains are highly likely to lead to mountain torrents and landslides in Anhui, Henan, Yunnan provinces and the Guangxi Zhuang autonomous region.

The Ministry of Water Resources said that from late July through early August, a period that usually sees heavy rainfall and flooding each year, the Yellow, Songhua and Haihe rivers are expected to see significant flooding. Meanwhile, the Yangtze and Zhujiang rivers may experience regional flooding.

Henan province closed more than 50 scenic areas in mountainous districts from Saturday through Monday－when they will reopen depends on the weather conditions.

By Monday, flooding in Anhui's Bengbu, a city along the Huaihe River, had affected about 40,000 hectares of agricultural fields. Eleven of 41 reservoirs in the city have exceeded the flood control levels.

Over the weekend, mountain torrents caused by rainstorms in Yixian county, Hebei province, destroyed a bridge over the Yishui River. The affected area has been blocked by local authorities.

In Hulunbuir, Inner Mongolia autonomous region, two reservoirs burst, affecting more than 16,660 people and washing out 22 bridges. Nobody was injured, and police officers relocated about 1,000 sheep from the flooded areas to grassland by Sunday, local media reported.

On Saturday, a restaurant in a low-lying area in Shuozhou, Shanxi province, was inundated by 20 centimeters of rainwater, which took firefighters nearly an hour to drain, according to local media.

In Xiamen, Fujian province, vehicles and nine people were trapped by flooding on a section of road on Saturday. A video shows the depth of water was up to firefighters' waists.

Weather authorities warn of mountain torrents, floods in small and medium-sized rivers and mudslides. The Ministry of Emergency Management has urged residents in dangerous areas to be relocated.