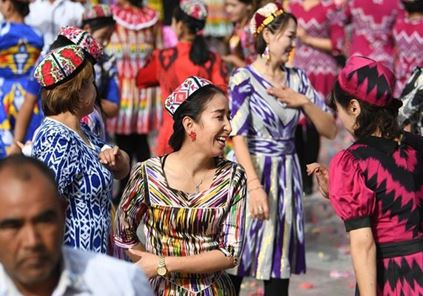 Pompeo issued a statement on November 5, titled "Harassment of the Family Members of Uyghur Activists and Survivors in Xinjiang, China," claiming that family members of the so-called activists Furkhat Jawdat, Alapat Arkin, Zumrat Dawut have been subject to harassment, imprisonment, and arbitrary detention.

The Xinjiang statement said what Pompeo stated "is simply not the case." The fact is the relatives of the names mentioned live and work normally in Xinjiang, and they are ashamed of the scum among their families.

The Global Times reporters visited the relatives of Furkhat Jawdat, Alapat Arkin, Zumrat Dawut in Urumqi and Yining and recognized that what Pompeo said is not consistent with the truth. No family members of the three people have been mistreated and they lead a normal life with numerous assistance from the residential community.

Zumrat attracted Pompeo's attention for her accusation that she made overseas against the Chinese government's Xinjiang policy. The Global Times reporters learned from Xinjiang authorities that before going abroad, Zumrat, 37, lived in Urumqi. She married a Pakistani national in November 2013. On January 3, the couple together with their three children went to Pakistan and later to the US.

The November 5 statement was not the first time Pompeo mentioned about Zumrat.

On October 2, Pompeo said in a meeting in Vatican that he listened to Zumrat's story and learned that she was summoned to the public security bureau in Xinjiang in April and was sent to a "concentration camp." Pompeo claimed that during her stay there, she was injected with some drugs.

A report on the Chicago Tribune on September 28 noted that Zumrat was forcefully sterilized.

Abduhelil Dawut, one of Zumrat's elder brothers spoke through a video about a month back to quash the rumors, saying "these are outright lies." In the video urging Pompeo to stop disturbing their peaceful lives, he said, "Respect the facts and do not make use of my sister Zumrat Dawut to make up lies."

The Global Times reporter visited Abduhelil, who lives in Urumqi. Abduhelil and his wife now work for a residential community in the city. The interior of their house and the cleanliness suggests that residents live a good life there.

Abduhelil told the Global Times his sister has never been to a vocational education and training center and "when delivering the third child, she was found to have fibroid and later had a surgery."

Abduhelil released a video on October 13 to refute Pompeo's remarks on her sister. Zumrat recently wrote on an overseas social media platform that the Chinese government spread rumors on her uterus being removed. However, no one has mentioned about anything on this.

The whole family was against Zumrat's marriage but Zumrat "was stubborn."

The relations between Zumrat and the other family members were "strained" after that. Abduhelil said, "She treated our father well when she was in a good mood, but when my father said something she did not like, she would slam the door and refrain from speaking to him for a year."

In 2018, Zumrat, her husband and the three children went to Pakistan and never came back. She finally went to the US without informing the family members, including their father.

Their father died of a heart disease last month. Abduhelil had a video chat with Zumrat and "I told her to stop spreading rumors and retract the lies she peddled online previously. She cried and said yes. But later, she continued peddling lies online."

Pompeo claimed that Zumrat's father, who was reportedly "detained and interrogated multiple times by Chinese authorities in Xinjiang in recent years, recently passed away under unknown circumstances."

However, Abduhelil told the Global Times that their father lived a normal life with them, and had neither been "interrogated" nor "detained."

After suffering from serious heart diseases, he died at the age of 80 at a hospital in October 2019 after medical treatment was exhausted. While he stayed at hospital, his relatives looked after him.

The death certificate of Zumrat's father mentioned the cause of death as "coronary heart disease."

Erkin Dawut is one of Zumrat's elder brothers. He was the one who signed his father's death certificate. He thought his father's physical conditions worsened partly because he missed Zumrat very much.

Erkin did not want to talk to Zumrat since "she always uttered lies since childhood."

"She is the youngest one among us. She was my father's favorite. My father grieved as she left without telling him," he told the Global Times.

Erkin was visibly in tears, as he recalled their father. "I keep my father's phone number and hope that he could call me like before," he said.

Not to be manipulated

Pompeo also mentioned about Furkhat Jawdat and Alapat Arkin, claiming that Alapat's mother was also put in the "concentration camp" since 2017 and his father was imprisoned in March 2018.

After meeting with Pompeo on Mar 26, 2019, Furkhat Jawdat claimed his mother was moved to a prison from a vocational education & training center.

The Global Times reporters learned from authorities in Xinjiang that Alapat and Furkhat were born in Yining. Alapat went to the US in 2015 and then joined the infamous violent terrorist and separatist organization "World Uygur Congress."

Furkhat went to the US in 2011 and later became a member of the "World Uygur Congress." Furkhat's father, brother and two sisters have obtained green cards in the US.

Gulnar Talat, Alapat's mother, told the Global Times that she lives a normal life and is not under detention. She plans to get medical treatment in Urumqi.

"Do not believe those who have ulterior motives. We live a good life. You were born and grew up in China. Thanks to the development of the country, you have the opportunity to study overseas. Hope you can study hard in the US and come back to contribute to the country."

The Global Times reporters learned that Alapat's father Erkin Tursun is in prison for inciting hatred and discrimination among different ethnic groups and covering up criminals.

Alapat's deeds worried his relatives. Alapat's uncle Asat Talat hoped to tell his nephew that his father was imprisoned for breaching the laws. "You should neither believe in rumors nor spread it. We sent you abroad to study and to honor the country. Not for something bad," Asat said.

Pompeo also noted about Furkhat’s  mother in his November 5 statement. Apart from Alapat, Furkhat's father, a younger brother and his two sisters, all live in the US now.

His mother failed to obtain her visa and now lives in their house in Yining.

Munawar Tursun, the mother, told the Global Times that she talks to her son almost every day. She pointed to a TV set in their house that her son bought online and was delivered to the house days earlier.

Furkhat did not admit that he is a member of the "World Uygur Congress." But he defended the organization on overseas social media and participated in its activities.

Munawar told the Global Times that she knows nothing about what her son has done overseas and persuaded him not to get involved in any illegal activities. "I told him, if he wants me to go abroad, it must be via legal means and that he must not engage in illegal activities."

Munawar believes Rebiya Kadeer, a separatist from Xinjiang, is a scum among the Uyghurs.

Furkhat claimed that the Chinese government harasses Muslim families in Xinjiang and they went abroad to seek asylum.

However, according to Munawar, Furkhat's father went to work in the US in 2006 and the children went to the US one after another within the next five years.

Furkhat's uncle Enwar Tursun told the Global Times that he used to be against all the children going to the US since Furkhat had good academic records and would have had a better future if he stayed in China and he can also take good care of his mother.

"Furkhat, you are a smart boy. What you are doing is wrong. You will regret it!" Enwar said, insisting that the "World Uygur Congress" is a separatist organization. "As for Pompeo, I think he took advantage of my nephew, which is ignominious."

In order to rally support from the overseas separatist groups, Zumrat, Alapat, and Furkhat distorted the truth and played victims. Separatists from China's Xinjiang share a common interest in hyping Xinjiang issues. "Detention" or "oppression" are the words usually mentioned by them.

The Global Times reporters did not find any oppression or detention of their relatives. Instead, family members of these so-called Uyghur activists are taken good care by the local residential communities.

Alapat's mother Gulnar Talat told the Global Times that she was in hospital in Urumqi due to some ailment in her spine. Colleagues and head of the kindergarten where Gulnar works for, visited her and donated 2,000 yuan toward her treatment.

The Yining educational bureau also allowed her to take a long vacation so that she could fully recover.

Furkhat's mother Munawar has become "the relative" of Zhang Liping, secretary of the residential community, who has taken a good care of Munawar.

Munawar has no job or earnings aside from the governmental subsidiaries.

"My monthly salary is around 3,000 yuan. I treat her as my family member and would not hesitate to help her," Zhang told the Global Times.

Zhang lost her 25-year-old son in 2017, while Munawar's children are far away in the US. The common emotion of parental love toward their children brings Zhang and Munawar together.

Zhang said she once saw Munawar shed tears while talking about her son. She comforted her by sharing the sorrow of losing her son.

"I often say to Munawar that I envy her because she can see her children via video chat. But I can only see the tomb of my son," Zhang said.

"There are many senior residents in my residential community. They comforted me and helped me get over my pang. As grassroots public servants, we need to devote our heart in helping the residents. The senior residents here also like me and greet me whenever we meet. This makes me happy," Zhang said.