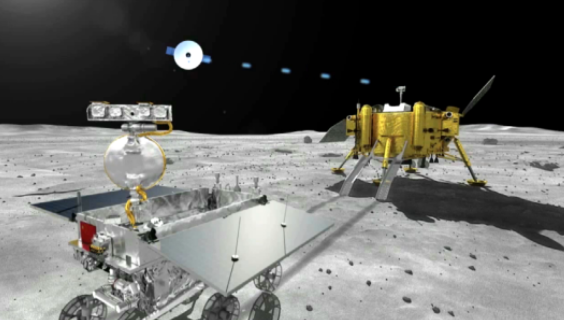 BEIJING (Xinhua) -- The relay satellite for the Chang'e-4 lunar probe, which is expected to land on the far side of the Moon at the end of the year, has entered the planned orbit, the China National Space Administration (CNSA) announced Thursday.

The satellite, named Queqiao (Magpie Bridge) and launched on May 21, entered the Halo orbit around the second Lagrangian (L2) point of the Earth-Moon system, about 65,000 km from the Moon, at 11:06 a.m. Thursday after a journey of more than 20 days.

"The satellite is the world's first communication satellite operating in that orbit, and will lay the foundation for the Chang'e-4, which is expected to become the world's first soft-landing, roving probe on the far side of the Moon," said Zhang Hongtai, president of the China Academy of Space Technology (CAST).

The concept of the Halo orbit around the Earth-Moon L2 point was first put forward by international space experts in 1950s.

While in orbit, the relay satellite can see both the Earth and the far side of the Moon. The satellite can stay in the Halo orbit for a long time due to its relatively low use of fuel, since the Earth's and Moon's gravity balances the orbital motion of the satellite.

"From Earth, the orbit looks like a halo of the Moon, which is where it got its name," said Zhang Lihua, project manager of the relay satellite.

He said the Halo orbit was a three-dimensional irregular curve. It is extremely difficult and complex to maintain the satellite in orbit.

"If there is a tiny disturbance, such as gravitational disturbance from other planets or the Sun, the satellite will leave orbit. The orbit period is about 14 days. According to our current plan, we will conduct orbit maintenance every seven days," Zhang said.

"Queqiao is like a little kid running wild in orbit. If there's even the slightest negligence by controllers on the ground, the satellite will be lost forever," said Guan Bin, a designer for the satellite's control system.

"It's a new type of orbit, we don't have any experience. We ran a number of simulations to make sure the design is feasible and reliable," Zhang said.

In order to set up a communication link between Earth and the planned Chang'e-4 lunar probe, space engineers must keep the satellite stable and control its altitude, angle and speed with high precision.

Next, the team will test the communication function of the relay satellite.

Weighing about 400 kg and with a designed life of three years, the satellite carries several antennas. One, shaped like an umbrella with a diameter of 4.2 meters, is the largest communication antenna ever used in deep space exploration, said Chen Lan, deputy chief engineer of the Xi'an Branch of CAST.

Tidal forces of the Earth have slowed the Moon's rotation to the point where the same side always faces the Earth, a phenomenon called tidal locking. The other face, most of which is never visible from Earth, is the far side or dark side of the Moon, not because it's dark, but because most of it remains unknown.

With its special environment and complex geological history, the far side is a hot spot for scientific and space exploration. The Aitken Basin of the lunar south pole region on the far side has been chosen as the landing site for Chang'e-4. The region is believed to have great research potential.

However, landing and roving require a relay satellite to transmit signals. Establishing a communication link is essential for the success of the Chang'e-4 mission.

The relay satellite is also equipped with a low-frequency radio spectrometer developed by Dutch scientists to help scientists "listen" to the deeper reaches of the cosmos.

A lunar optical imaging detector developed by Saudi Arabia is installed on a micro satellite launched together with Queqiao.

The lander and rover of Chang'e-4 will be equipped with instruments developed by Germany and Sweden. China's lunar exploration program will be a new research platform for scientists around the world.