CHINA Relics from Qinghai's rich trading past go on show

Relics from Qinghai's rich trading past go on show 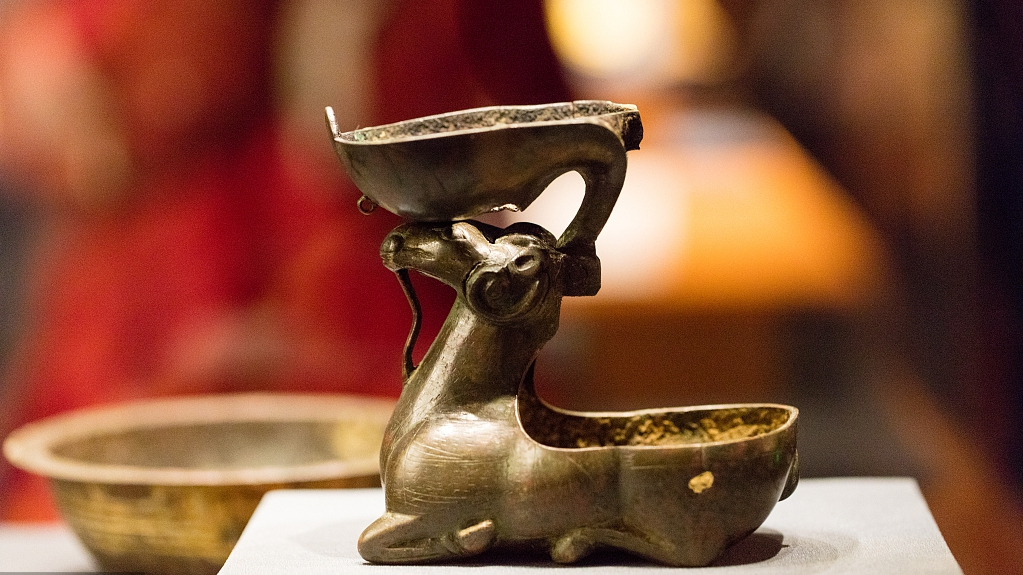 The Capital Museum in Beijing is showcasing an exhibition about the cultural and historical development of Northwest China's Qinghai Province, focusing particularly on its close relationship with the ancient Silk Road.

Located on the Qinghai-Tibet Plateau, Qinghai has an average altitude of over 3,000 meters. The unique geographical conditions there have nurtured distinctive cultural features over the centuries.

The show, "Qinghai in the Belt and Road," runs until June 30 and displays 442 cultural relics, including works of colored pottery and copper ware, religious art and crafts, as well as silk fabrics and other treasures. It is the first time that many of the exhibits have been shown to the public.

A pottery basin depicting people dancing together hand-in-hand displays Qinghai culture during the Stone Age. "The work is one of the earliest symbols of dance culture in China," said Li Zhixin, the director of Qinghai Institute of Cultural Relics and Archaeology.

"The ancient people are joining hands to take part in the dance, which implies a spirit of joint effort. And this spirit inspires people today to seek cooperation as well." 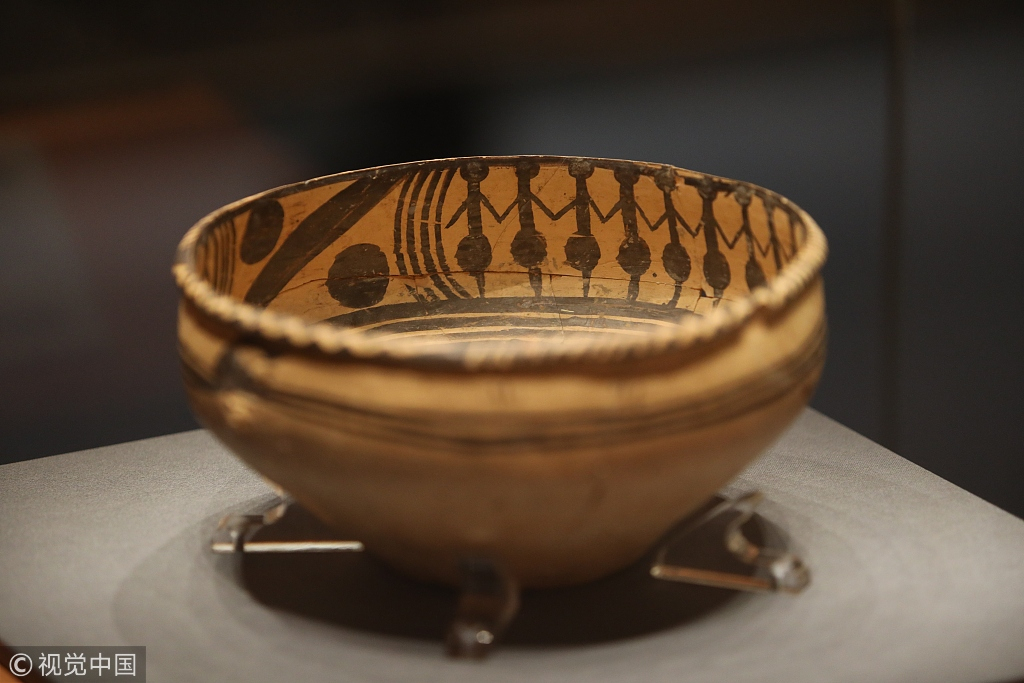 A pottery basin depicting people dancing together hand-in-hand is displayed at the show "Qinghai in the Belt and Road" in the Capital Museum in Beijing, March 1, 2019. (Photo: VCG)

During the Han Dynasty (206 BC-AD 220), Qinghai's Qiangzhong Road became a main highway connecting East and West, and formed part of the ancient Silk Road. Relics from different cultures can be found there alongside artifacts of the local Qiang ethnic group. One exhibit from that time is a gold medal which shows a wolf attacking a bull in a forest. The medal was used by the nomadic Xiongnu tribe as a sign of social status.

During the Eastern Jin Dynasty (317-420), Murong Tuyuhun, a son of the nomadic Xianbei tribe's chief failed to keep on good terms with his brother and moved his troops to Qinghai. In 329, his grandson Murong Yeyan inherited the position of khan and established the Tuyuhun Kingdom using his grandfather's name. The Tuyuhun Kingdom dominated Qinghai for over 350 years and was on good terms with the Tang Dynasty (618-907) after the last Tuyuhun khan Murong Nuohebo married Tang princess, Honghua.

The Tuyuhun controlled a section of the southern Silk Road route, which became known as the Tuyuhun Road. The road ensured peaceful economic and cultural exchanges between Chinese dynasties in the east, and the Xiyu, or western regions.

The Tibetan Tubo Kingdom ended the Tuyuhun's reign in Qinghai in 663. Some exhibits found in tombs in Qinghai's Dulan county reflect the Tubo's dominance in the region, including items bearing gold and crystal decorations. One of the highlights at the exhibition from this era is half of a waistband inscribed with Persian Pahlavi text. 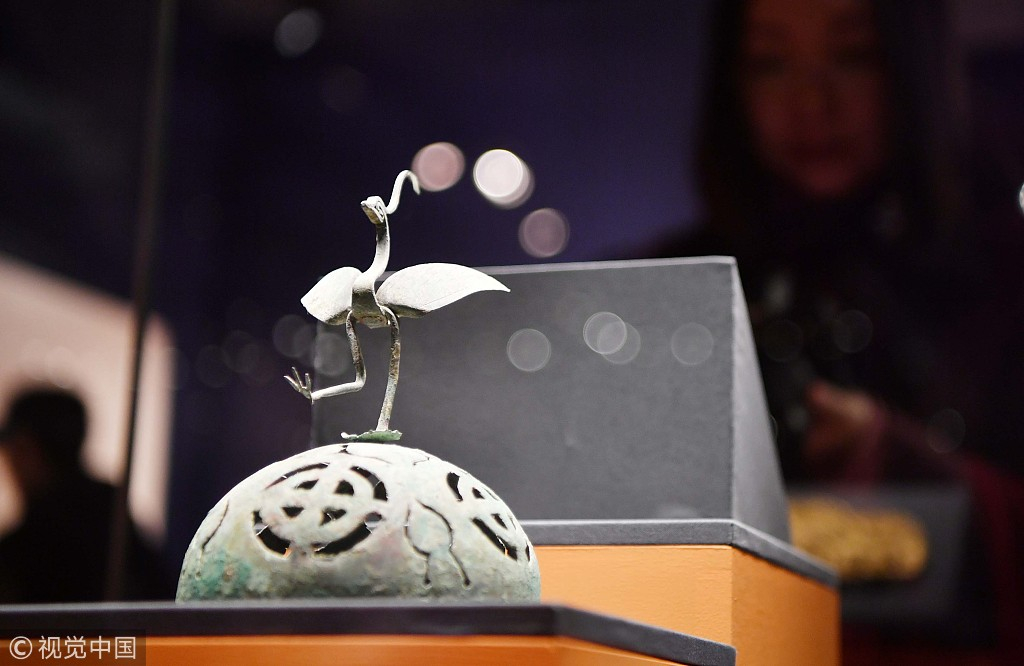 A cultural relic is displayed at the show "Qinghai in the Belt and Road" in the Capital Museum in Beijing, February 28, 2019. (Photo: VCG)

"Pahlavi words have been found on some coins and in some texts, but this is the only brocade we have ever found with such words," said Cai Linhai from Qinghai Institute of Cultural Relics and Archaeology.

Cai said the waistband belonged to Peroz III, the last king of Sasanian Persia who asked for help from the Tujue Kingdom when his empire became subjugated, but he was refused. "It is believed he may have passed through Qinghai to seek help from the Tubo Kingdom and left the band there."

Lin Meicun, an archaeology professor of Peking University, said the other half of the band is kept by a private British collector and has Peroz III's name inscribed on it.

The waistband was unearthed from Dulan's Xuewei No 1 tomb, which is known as the "Nine-story Demon Tower" to local people, reflecting its large scale and myths surrounding it. But the identity of the tomb owner remains a mystery, since no human remains or written evidence have ever been recovered from the site.

"We don't know whether the owner was male or female, or the number of people who were buried in this tomb. The only thing we know is that the tomb was built around 715. But judging from its vast scale and the precious waistband unearthed there, we presume the tomb belonged to the chief of Dulan at that time," said Cai. 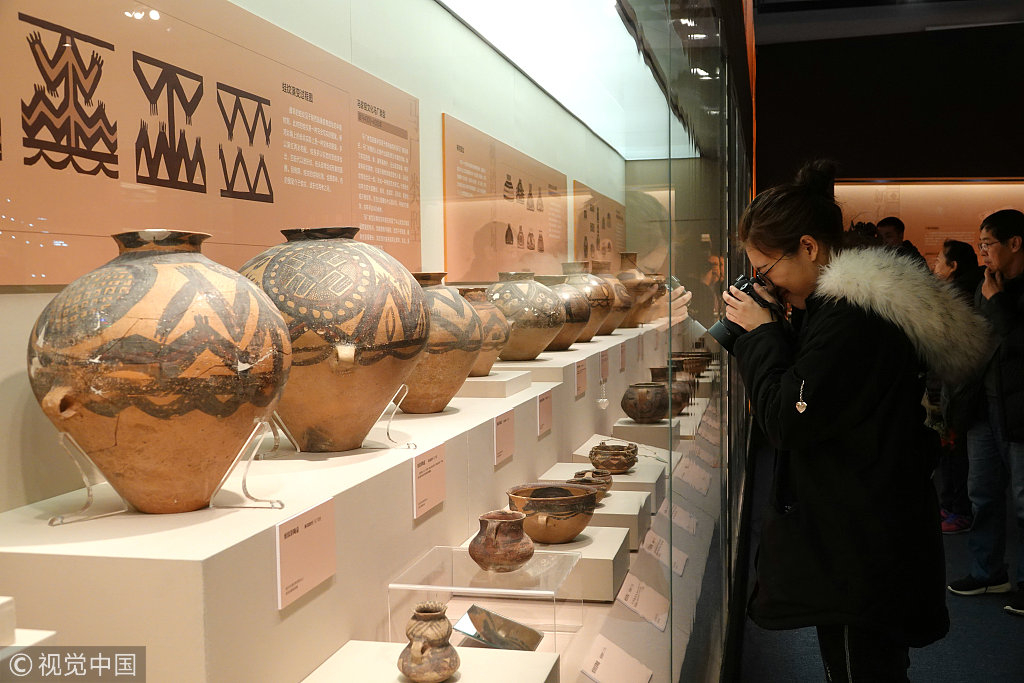 Visitors appreciate cultural relics at the show "Qinghai in the Belt and Road" in the Capital Museum in Beijing, February 28, 2019. (Photo: VCG)

The mysterious tomb owner is said to have controlled strong military forces. "Based on Tubo's history of attacking the southern part of Xinjiang Uygur autonomous region and Dunhuang (in Gansu province), Dulan must have served as an important base with a strong military force," said Cai.

The later ancient Tang-Tibetan road and Tea Horse Road also traversed Qinghai, with relics on display from this time showing the strong communication links that the roads provided.

Niu Jun, the director of Qinghai's Cultural Heritage Administration, said the exhibition is a feast of cultural relics.

"We hope more people will learn about Qinghai's diverse culture and long history, and come to understand China's traditional culture."