Islamic religious leaders in the Xinjiang Uygur autonomous region are also victims of extremism and terrorism with several Uygur religious leaders being murdered or receiving threats, the regional Islamic association said, adding that religious extremists who choose to kill the innocent to achieve their goals are the greatest threat to Islam. 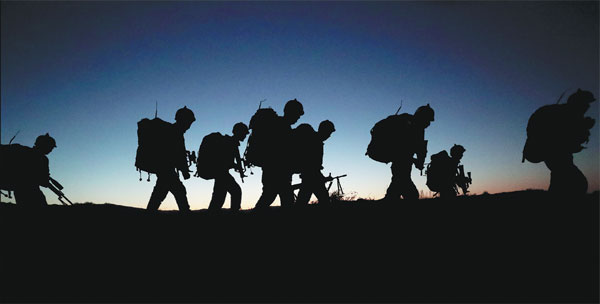 This Aug 11, 2019 file photo shows an early morning search for terrorists in the north of Xinjiang Uygur autonomous region during the the Sino-Kyrgyzstan "Cooperation 2019" joint anti-terrorism exercises. (Photo: China Daily)

The spread of extremism and terrorism in Xinjiang once led to frequent terrorist attacks in the region. A large number of people, including Uygurs and several Islamic religious leaders, were killed in violent attacks, the Xinjiang Islamic Association said in a statement on Thursday after the so-called Uygur Human Rights Policy Act of 2019 was approved by the United States House of Representatives on Tuesday.

Juma Tayier, 74, an imam at Id Kah Mosque in Kashgar, was killed by three people after he performed a routine sunrise prayer at the mosque on July 30, 2014.

According to court files, the three attackers belonged to a cell that practiced religious extremism. They watched videos of detailed terrorist activities and organized physical training sessions before killing Juma with an ax. They believed the imam was corrupting the true meaning of the Quran. The mastermind of the attack was only 18.

It was not the first time a religious leader from Id Kah, the largest mosque in China, was targeted by separatists or religious extremists.

On May 12, 1996, three people ambushed imam Aronghan Haji, 76, and his son after they left their house for morning prayers at the mosque. Aronghan was stabbed 21 times in the head, back and legs. Aronghan and his son were severely injured in the attack.

Religious extremists have betrayed the Muslim pursuit of peace, and they are the greatest threat to Islam and are despised by Muslims, said the association, adding that the murderous act distorted and discredited the human rights of Xinjiang's Muslims.

To strengthen control over people's thinking, religious extremist forces discourage people from learning the standard Chinese language and require people to follow rules they invented rather than the law. Their goal is to seek independence of the region and establish a theocratic regime, said Shewket Imin, chairman of the Standing Committee of the Xinjiang People's Congress, the regional legislature, in a signed article published in the official Xinjiang Daily on Thursday.

To prevent people who were once infected with extremist or terrorist thoughts from becoming religious extremists who ignore the law, sabotage social order and even kill innocent people, Xinjiang set up vocational training and education centers in accordance with law, Shewket said.

Subnur Memetmin, 23, said she first had contact with religious extremists when she was just 13. "At first, I was just curious about the heaven described by my neighbor where there is unlimited money to spend and I will have my own servants," said Subnur, who graduated from a center in southern Xinjiang's Yecheng county in October 2018.

After being told that she could enter heaven by killing "nonbelievers", she started to aggressively search online at the age of 16 for information on making explosives and how to avoid being caught by public security forces.

Also, Subnur strictly followed the extremists' rules. "I refused to buy anything made by Han Chinese. Also, I saw those who carried out terrorist attacks as heroes and hoped I could be one of them one day," she said.

Abudulrekep Tumniaz, head of the Xinjiang Islamic Institute, said on Thursday that those who are influenced by religious extremism are people who are lost and not necessarily evil. There are 10 Islamic institutes around the region with 1,100 students who provide better, non-radicalized religious services to more than 10 million Muslims in the region.

The vocational centers have played a key role in helping people realize their mistakes and preparing them for a better life. They are not "concentration camps" that "imprison a large number of Uygur Muslims" as they are portrayed in the US act, said Abudulrekep, who has visited many centers.

Religious extremism has nothing to do with Islam. It twists Islamic doctrines and endangers social stability. The extremists are the enemies of the Xinjiang people including Muslims, Abudulrekep added.

The region has always ensured that Muslims' needs for religious activities can be fully satisfied. The number of mosques has grown to 24,000 from just 2,000 since the 1980s. The government has also funded renovation projects of mosques in the regional capital of Urumqi and in the cities of Yining and Hotan in recent years, Arken Tuniaz, vice-chairman of the region, said in a signed article published in Xinjiang Daily on Thursday.