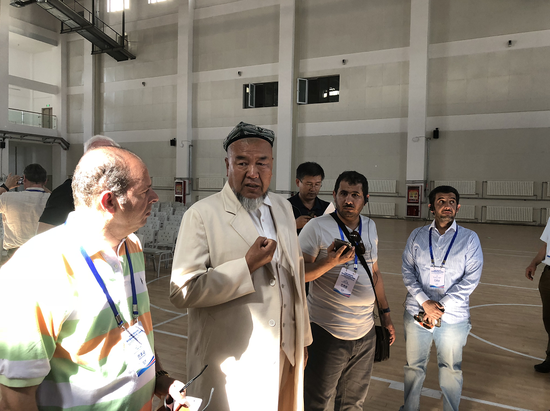 URUMQI, Dec. 9 (Xinhua) -- Religious leaders in Xinjiang have expressed strong indignation over and firm opposition to the passage of a Xinjiang-related bill by the U.S. House of Representatives.

The so-called "Uyghur Human Rights Policy Act of 2019," which was approved by the U.S. House of Representatives on Tuesday local time, has fully exposed its malicious intent to use Xinjiang-related issues to provoke ethnic relations in China, undermine the prosperity and stability of Xinjiang and contain China's development, the religious figures said.

"Xinjiang has long been an inseparable part of Chinese territory. Xinjiang-related issues are purely China's internal affairs and cannot be interfered with by any external forces," said Abudurehap Tumuniyaz, president of the Xinjiang Islamic Association.

"In the period when extremist ideologies penetrated and spread, and violent and terrorist atrocities were frequent in Xinjiang, local residents lived in fear every day. Now, Xinjiang has cracked down on violent and terrorist activities in accordance with the law and has not had a single terrorist attack in the past three years. People of all ethnic groups feel much safer and happier," he said.

"Xinjiang-related issues are not about ethnicity, religion or human rights, but about fighting violence, terrorism and separatism," said Abuduxvker Rehamdulla, vice president of the China Islamic Association and imam of Baida Mosque in Urumqi.

Abuduxvker Rehamdulla has witnessed the impact of religious extremism on local people. "Some do not allow their children to go to school, some participate in violent and terrorist activities and some keep away from relatives and do not raise their children. If religious extremism continues to be allowed, will there be a future for Xinjiang? Will there be a happy life for people of all ethnic groups here?"

The establishment of vocational education and training centers is an urgent need to curb the frequent occurrence of violent and terrorist incidents and eradicate the breeding and spreading of religious extremism, according to Ehemat Oseman, imam of a mosque in the Aksu Prefecture.

"It is also an effective measure to equip local people with better education and vocational skills, increase employment and income and promote long-term stability in Xinjiang," Ehemat Oseman said.

Mamet Juma, imam of the Id Kah Mosque in the city of Kashgar, said the education and training centers have brought a better life for many in the region.

"One of the trainees opened a jade shop after graduation and can make over 6,000 yuan (about 852 U.S. dollars) a month," said Mamet Juma.

"Xinjiang belongs to China, and the Uygur ethnic group is a member of the big family of the Chinese nation. Any attempt to alienate China's ethnic relations and curb China's development is doomed to failure," said Keran Abuliz, vice president of the Xinjiang Islamic Association.

"The will of the people of all ethnic groups in Xinjiang to safeguard national unity is rock-solid and the pace of realizing the great rejuvenation of the Chinese nation is unstoppable," he said.