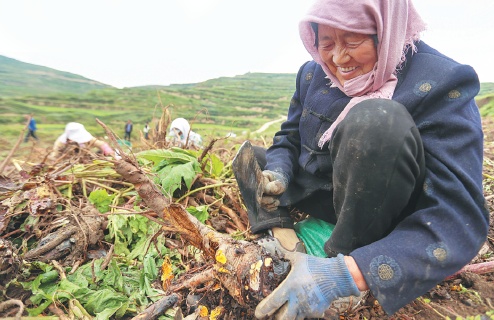 Despite moving to the city, residents are seeing their old homes become money-spinners. Hou Liqiang reports from Tanchang, Gansu.

As the minibus arduously climbed a steep, zigzagging road, the engine occasionally emitted roars and groans. The bends were so sharp that sometimes the driver had to stop and reverse a little to ensure safe passage.

Even with all the windows tightly closed, the smell of hot rubber penetrated the vehicle occasionally, indicating the friction of the tires on the ground as the bus climbed the sloping cement road.

Welcome to Shanbei and Luowan, neighboring villages located halfway up a rocky mountainside in Tanchang county, Gansu province. As the passengers marveled at the steep road after almost 20 minutes of a faltering journey from the foot of the mountain, what came into sight next made them exclaim loudly.

"The mountain is rocky and shrouded by clouds. The farmland is limited and each plot is only big enough to accommodate a cow lying down," as a local saying goes. With a bright sun, the clouds were absent, but the withered plants made the rocks stand out more and the small plots of farmland looked even more desolate.

For decades, probably even centuries, the harsh conditions in the villages left the locals plagued by poverty.

Now, though, the settlements are a reflection of how the government has worked to lift people out of poverty in places where natural conditions can barely support them.

Following relocation and industrial development measures, most people in the villages have left poverty behind as China strides toward building a moderately prosperous society in all respects by next year.