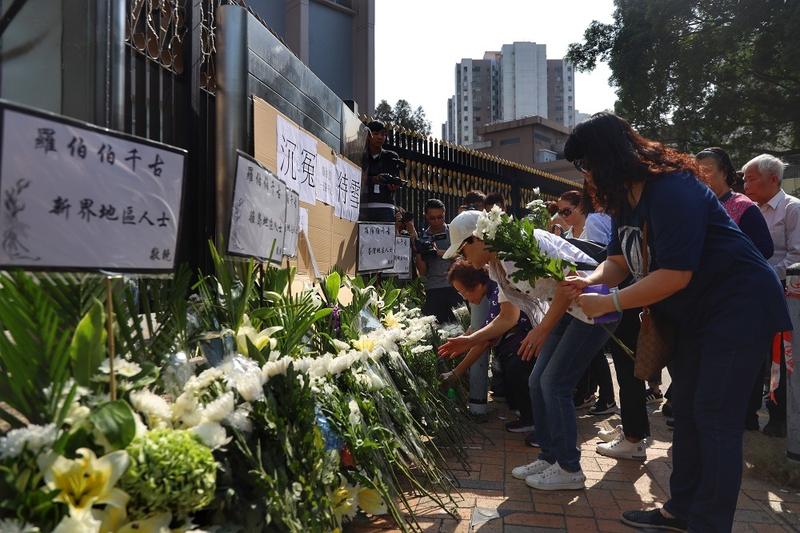 Hong Kong residents come to North District Town Hall in Sheung Shui on Friday to mourn the 70-year-old cleaner who died after being hit on the head in a clash during violent protests. (Photo: China Daily)

The remains of the senior off-duty sanitation worker who died after being hit in the head by a brick hurled by a rioter in Hong Kong last week will be sent to the mainland, and will be buried next to his father's grave, Hong Kong media reported.

The worker surnamed Lo previously said that he hoped to be buried in his hometown in Central China's Hunan Province, and the Hong Kong Federation of Trade Unions (HKFTU ) which is responsible for Lo's funeral affairs plan to send Lo's remains back to his hometown.

Lo's eldest son told media on Friday that he hopes his father's incident could be the end of the hatred rather than the beginning. He said his father loved Hong Kong deeply, and he probably planned to help police gather evidence by filming the violence.

A group of black-clad rioters set up roadblocks near North District Town Hall in Sheung Shui on November 13. They clashed with residents who tried to clear the road, throwing iron rods, bricks and other hard objects at the latter. Lo, 70, was hit in the head by a brick when filming what was happening with his phone. He was knocked down to the ground and fell unconscious. His death was announced the next day at the hospital.

HKFTU Chairman Wong Kwok said that Lo deserves to be respected as he dared to say "no" to violence, and he condemned some people who attempted to damage the wreaths set up at the scene. He said they were "inhumane" to do this.

He said people with different political views should respect the deceased and should have a moral bottom line.

His son said he wished police would solve the case as soon as possible. Hong Kong police has classified the case as a murder.