Temples, memorial archways and ancient gray houses are attracting tourists to the historic district of Nanning, the bustling capital of southern China's Guangxi Zhuang autonomous region, thanks to months of renovation. 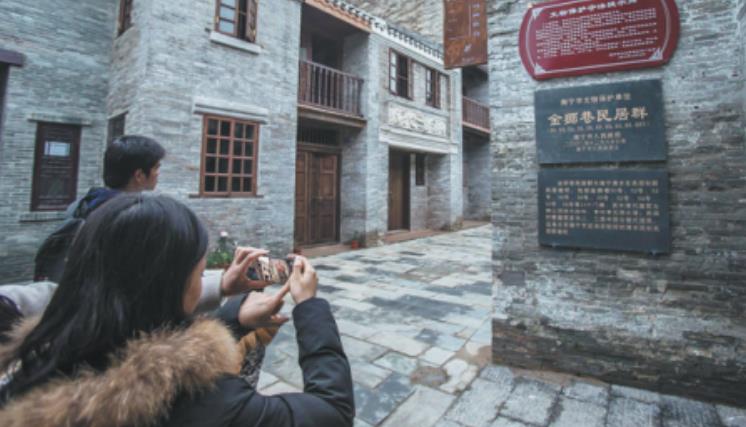 The district consists of three main roads and two alleyways built almost 100 years ago. The Golden Lion and Silver Lion alleyways, and Xingning, Minsheng and Jiefang roads are known as the origin of prosperity in Nanning.

In the early 20th century, the three roads were the busiest, and the two alleyways were "the center of all centers".

"People who lived in the vicinity of the district were the richest in the city," one resident said.

"Near the alleyways, people would come to make gold and silverware. That was the lives of the rich and famous."

After a century of changes, Nanning has developed into a front gate of trade with members of the Association of Southeast Asian Nations, but the houses in the old district were left to disintegrate.

"The district basically became a slum," said Zhao Meizhu, who used to live in Golden Lion Alleyway. Zhao said the houses were too old to be fitted with natural gas facilities, so each household had to resort to using coal gas, and electric wires were interwoven overhead. Many families left their old houses for modern districts in Nanning, leaving the old district even more deserted.

Recognizing the historic value of the district, the local government decided to transform it into a place of interest. Last year, it decided to build and renovate some houses, determined to keep examples of the original style.

"While some houses were rebuilt, the houses of 13 families kept their brick-and-wood structures, including mine," Li Yanhao said.

Li, now 72, has been living in Golden Lion Alleyway since he was 7. His children also grew up in the alley.

"The old alleyway is my old home, so when I heard about the government's decision to transform it, I was quite anxious," Li said. "But I am glad that they returned the district to its original glory."

After months of renovation, the historic district opened to the public at the end of last year. The houses remained basically in the same style.

"The houses looked quite ragged in the past," Li said. "Now, they are both new and nostalgic."

Some big old houses were turned into museums, displaying distinctive cultural elements such as paper-cutting, Zhuang ethnic embroidery and porcelain.

Many historic items remain. For instance, old walls with phrases like "Stick to the principles of late marriage and late childbirth" referring to the family planning policy are still in the district. Other phrases include "alter old customs" and "make funerals simple".

People often come to visit the district, with many wearing traditional qipao to take pictures with the classical buildings and streets as backdrops.

Qin Yumei, who is in her 80s, returned after the district was renovated, reminiscing about her teenage years as a medical student in the 1950s.

"This place was once where my friends and I shopped and relaxed," Qin said. "It is amazing how they managed to recreate the atmosphere of the past."

Many local craftsmen continue to do business in the district after the renovation, including silversmith Wu Jinglan and her husband, who have been doing business in Silver Lion Alleyway for 21 years.

"Business is getting better because we have more customers," Wu said. "We will stick with our business in the alley."