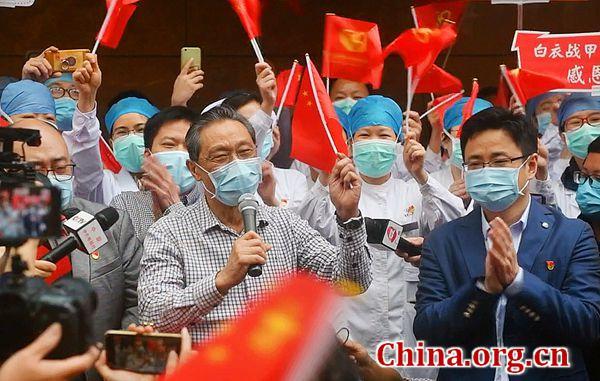 Epidemiologist Zhong Nanshan, an academician of the Chinese Academy of Engineering, speaks at a ceremony to greet and thank a returning medical team who went to aid Hubei province during the COVID-19 pandemic, in Guangzhou, Guangdong province, April 22, 2020. (Photo: China.org.cn)

In an interview with Xinhua, Zhong advised Hong Kong to ramp up testing to find asymptomatic carriers, some of whom, he said, still have a high capacity to pass on the infection.

"My suggestion is a Hong Kong-wide nucleic acid screening ... so as to timely trace and quarantine (the infected) and reduce human-to-human transmissions," he said.

"I strongly support universal nucleic acid testing in Hong Kong. Of course, this may be expensive," Zhong said, noting that in the Chinese mainland, the test fee has dropped to 60 yuan ($8.6), compared to more than 1,000 Hong Kong dollars in Hong Kong.

Community transmission is already taking place in Hong Kong, but the expert said it has not seen the exponential growth of new cases experienced by some Western countries, thanks to government and social interventions.

The HKSAR government announced on Monday that it would tighten anti-virus measures starting from Wednesday, including banning dining-in services in restaurants and making mask-wearing compulsory in all public places, both indoors and outdoors.

Zhong said many mainland cities and provinces have adopted strict containment measures to beat the epidemic. After new clusters emerged from a food market in Beijing in June, the city launched a massive testing initiative as one of a series of strong measures, including the closing of schools, thereby reducing the number of new confirmed cases to zero within a month.

"As far as I know, people in Hong Kong are more used to voluntary testing," Zhong said. "But in my opinion, if the epidemic continues to worsen, everyone should take nucleic acid tests. It is essential that citizens cooperate voluntarily."

"In Beijing, people were all very cooperative and united, as they endured more than 20 days (of strict measures). Although it was uncomfortable in those days, we knew it was intended to cut off the source of infection more quickly," he said.