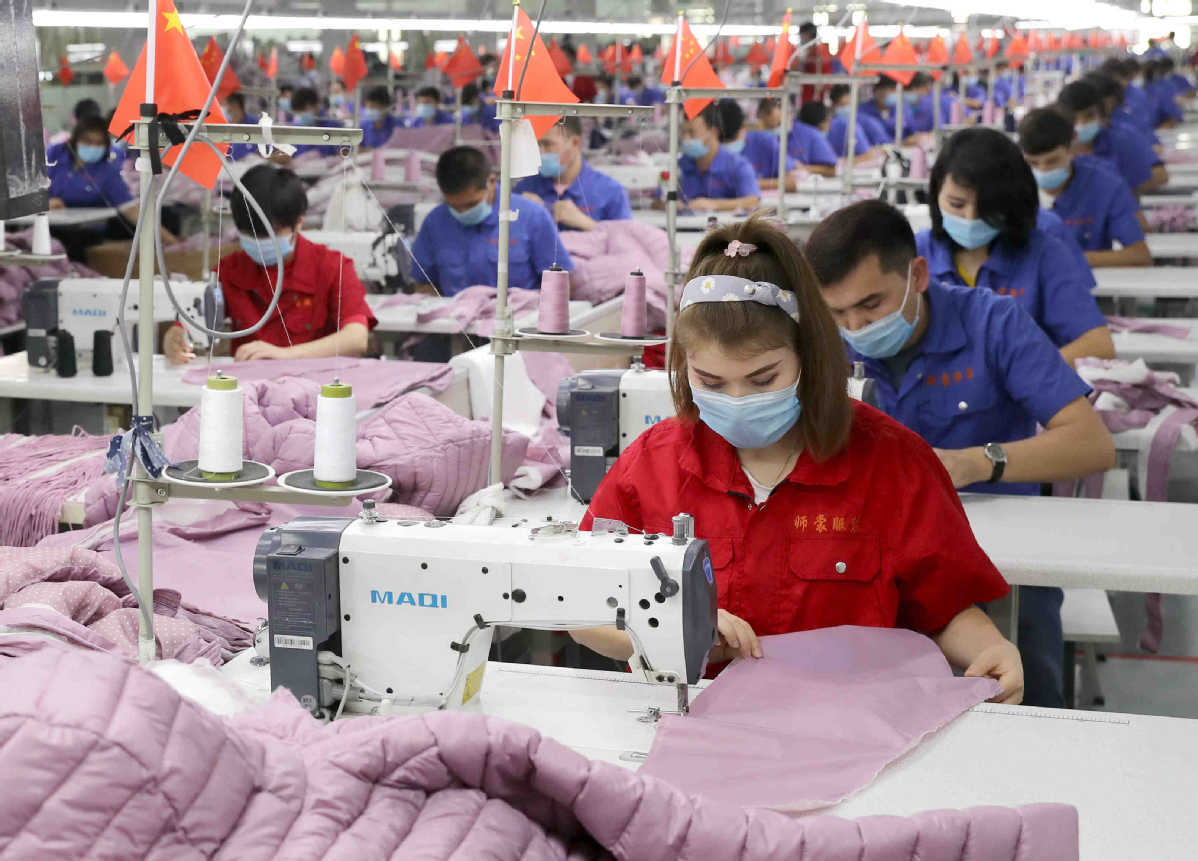 The poverty alleviation policy in the Xinjiang Uygur autonomous region meets the needs of the population and there is no such thing as "forced labor" in the region, according to a report released on Monday by Southwest University of Political Science and Law.

The report from the Chongqing-based university's Human Rights Institute is the latest response to claims by US and Australian think tanks that China has widely forced ethnic minorities in Xinjiang to work under the guise of poverty alleviation projects.

Denying this, the report said Chinese laws strictly forbid "forcing others to work" and all Xinjiang employees have chosen to seek employment elsewhere of their own free will, which greatly improved their economic situation and quality of life and enabled them to enjoy more development opportunities.

The institute set up a research and investigation team and conducted field investigations, surveys and in-depth interviews with Xinjiang migrant workers, and the research was based on objectively analyzing the current situation of Xinjiang's poverty problem without making any presumptions, the report said.

The harsh environment in Xinjiang has severely restricted the development of the region and is the key factor causing poverty. Agriculture is still a pillar industry in the region but the proportion of added value from the agricultural industry is decreasing, making it increasingly difficult for farmers and herdsmen to get out of poverty through agricultural development, the report said.

Although the per capita income of residents continues to grow, the relative poverty gap is widening, and it is difficult for rural residents to increase their incomes, the report said.

In March, the research team conducted a survey on the employment situation of members of the Uygur ethnic group and interviewed many migrant workers in other parts of China. The results, contradicting the claims by Western think tanks, showed that migrant workers who had originally been engaged in agriculture and animal husbandry wanted to work elsewhere to get a higher income and greater development opportunities.

The survey showed that 84 percent of migrant workers were in the 3,501-5,000 yuan ($523-747) monthly income bracket, compared with the no more than 1,500 yuan they could have made monthly from working in agriculture.

"After a period of working and doing business in cities and towns, migrant workers broaden their horizons, accumulate skills, knowledge, investment and management experience and return to their hometowns to start their own businesses," the report said, adding that this has helped enhance entrepreneurship in Xinjiang.

Xinjiang has formulated poverty alleviation laws to protect local residents' right to be free from poverty.

Therefore, the think tanks' claims are "untrue and even tainted", the report said. "They ignore the current poverty situation in Xinjiang and the realistic needs of the people in pursuit of a happy life. They distort China's poverty reduction plan and employment promotion policy."

This is not the first time that Chinese studies have refuted Western accusations of "forced labor" in Xinjiang. A report released on Oct 20 by the Development Research Center of Xinjiang also found that an increasing number of Xinjiang workers have voluntarily sought employment in more developed areas in order to get higher salaries and better living conditions.

The latest report showed that in Aybagh, a village in Kashgar prefecture, out of a working-age population of 1,509 people, 1,288 were willing to seek employment opportunities outside the village, accounting for 85 percent of the local workforce.

In addition, among 1,699 people of working age in three villages of Hotan county, 1,493 were willing to leave for employment, accounting for 88 percent of the local workforce.

"That means 86.5 percent of the workforce in the four villages are willing to seek employment outside their hometown, which indicates that the ethnic minorities have a strong willingness to voluntarily work elsewhere," the report said.