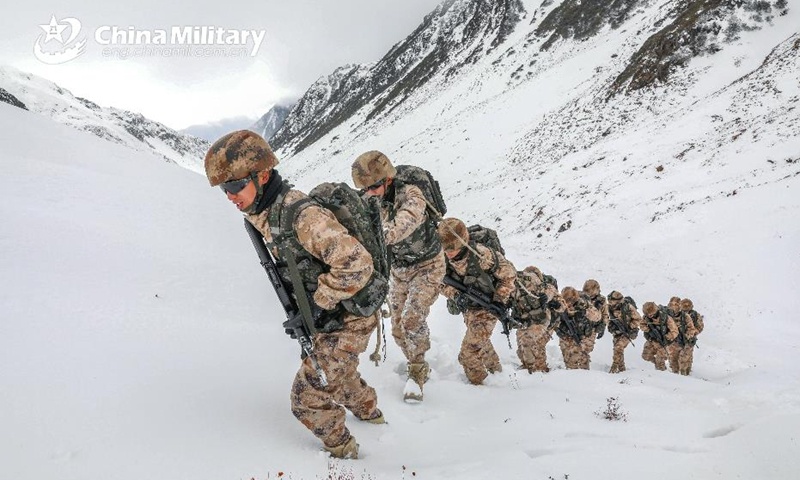 Frontier defense soldiers assigned to a border defense regiment with the Shannan Military Sub-command under the PLA Tibet Military Command patrol the snow-blanketed border at the elevation of over 5,000 meters in Tibet Autonomous Region on January 23, 2021. (Photo: eng.chinamil.com.cn)

India should stop political manipulation and make efforts to realize full disengagement at an early date, as China's will to cherish peace and its military strength are both stronger than India, experts said, after a media report said India had deployed at least 50,000 additional troops to China-India border regions.

Bloomberg described India's alleged move as a "historic shift toward an offensive military posture" against China. Citing sources, the report said India has dispatched troops and fighter jet squadrons to three border areas, and there are about 200,000 Indian troops along the border.

Chinese Foreign Ministry spokesperson Wang Wenbin said on Monday that the situation on the China-India border is generally stable and the two sides are negotiating on the issue.

Indian media reported that Indian Defense Minister Rajnath Singh on Sunday arrived in Ladakh to review military preparedness, his first visit to the area since the Pangong Lake region disengagement in February.

"The words and deeds and military deployment of the Indian military and political dignitaries should be conducive to easing the situation and enhancing mutual trust, not the opposite," Wang said at a press briefing.

Analysts said that the peace and tranquility on the China-India border have not been guaranteed on a sustained basis; however, Bloomberg's report is not beyond all doubt.

"India has a large number of troops in the border area who are not just conducting a simple patrol… But even at the most intense time of the border dispute in 2020, India did not achieve the logistical support of 200,000 men," Zhao Gancheng, director of the Center for Asia-Pacific Studies at the Shanghai Institute for International Studies, told the Global Times on Monday.

Geopolitically speaking, instability on the China-India border is good news for the US, Zhao said.

Observers said that in order to shift the attention on its domestic epidemic fiasco and recession, Indian politicians and media, using US as a backer, have repeatedly made irresponsible remarks targeting China to gain leverage for the following negotiations.

China and India had their 22nd meeting under the consultation and coordination mechanism on border issues on Friday, and both sides agreed to consolidate results of disengagement of frontline troops and properly manage the remaining problems along the western section of the border.

The two countries also agreed to maintain high-level diplomatic communication to offer further guidelines to properly deal with border issues, and actively prepare for the 12th round of commander-level talks and determine the time and arrangement through the border hotline.

The communication channels are still opening, and the two countries should make efforts to prevent the border situation deteriorating, Zhao said.

China has always been holding a military advantage over India, and this will not change just because of the Indian military's deployment, a Chinese military expert who requested anonymity told the Global Times on Monday.

The new gear, together with intensive training of border defense troops, are a natural result of China's normal national defense development, and the PLA is always ready to safeguard the country's sovereignty and territorial integrity, the expert said.