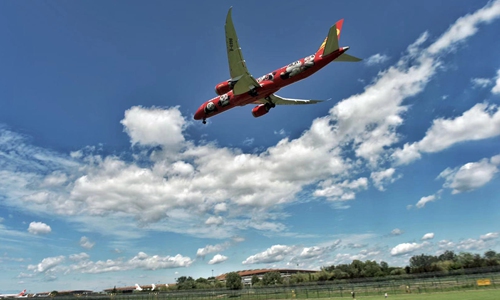 The plane departed at 7:32 am and an unidentified mechanical error occurred when it reached a height of 9,200 meters. The crew dealt with it in accordance with regulations and descended to a safe height, returning to Shenzhen airport at 9:12 am.

All crew members and passengers were safe, Shenzhen Airlines, operator of the flight, said in a post on its Twitter-like Sina Weibo.

The incident drew the attention of the Chinese public following some reports that claimed the plane dropped 6,000 meters in two minutes.

Experienced pilot Chen Jianguo told Chinese media that the reports were inaccurate. The plane dropped 5,500 meters from 7:52 to 7:57 am, a rate of roughly 1,100 meters per minute, Shanghai-based news outlet the Paper reported.

"It's impossible for a plane to plunge 3,000 meters per minute. A plane would disintegrate at such a speed," Chen said.

The flight issued a 7700 code, which signifies an emergency for a mechanical error or a medical emergency, but does not necessarily mean there is danger.