Reprieve for cormorant fishing on Yangtze 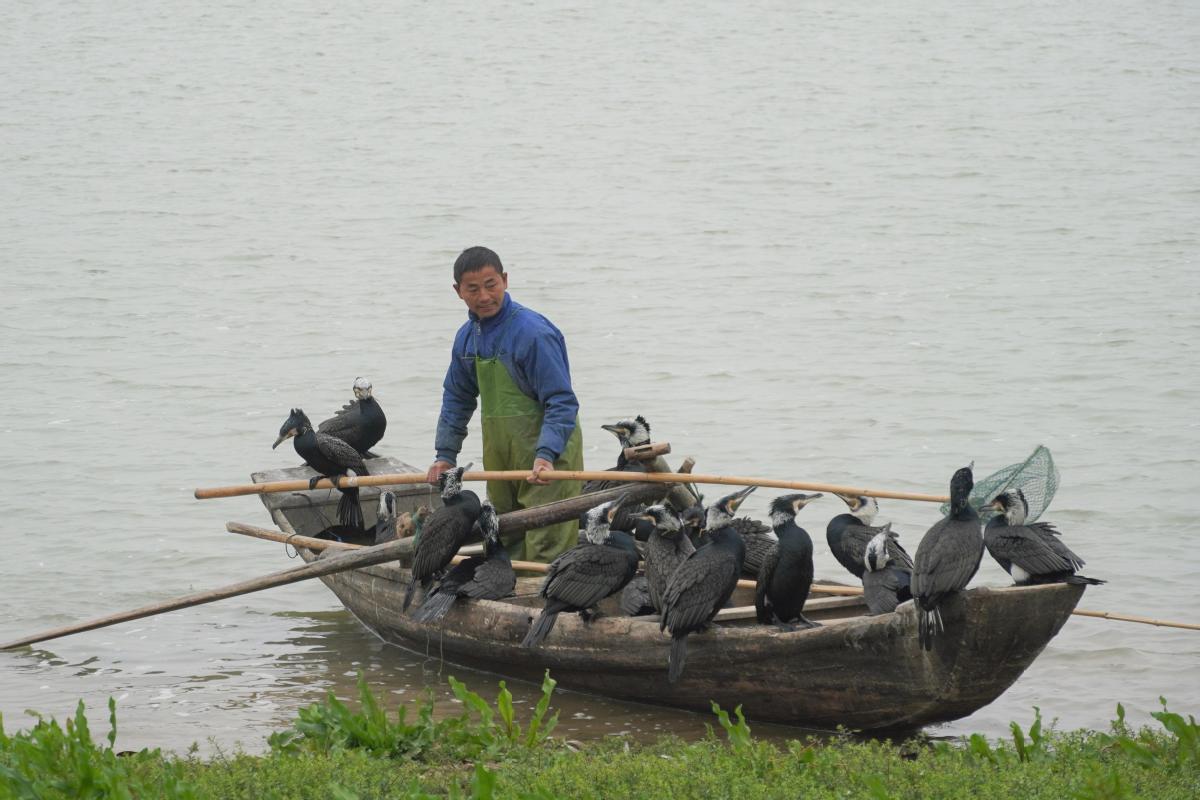 Yuan and his cormorants take a break on the lake. (Photo: Xinhua)

NANCHANG－Yuan Guosheng wore a raincoat and a straw hat as he pushed his boat with a bamboo pole on the vast waters of misty Poyang Lake. On the boat stood his 21 black "fellows"－the cormorants.

"The birds are traditionally used by local fishermen like me to help catch fish," said Yuan, 45, a fisherman in Kangshan township in Jiangxi province. "My 21 fellows have been with me for many years, and the oldest has been fishing with me for almost two decades."

Cormorant fishing on Poyang, China's largest freshwater lake fed by tributaries of the Yangtze River's middle and lower reaches, is a method dating back about 1,000 years. The technique used to be greatly admired, and ancient Chinese poets even wrote poems singing its praises.

The old fishing skill, however, is starting to disappear, driven away by modern technology and a national fishing ban.

Last month, China began a 10-year fishing ban on key areas of the Yangtze River to protect biodiversity in the country's longest waterway.

The fishing moratorium forms part of a key strategy to stop depletion of resources and degradation of biodiversity in the Yangtze River, which has been plagued by human activities such as overfishing, pollution and damming, said Vice-Minister of Agriculture and Rural Affairs Yu Kangzhen.

The ban means cormorant fishing will face an even tougher future. Two decades ago, more than 20 fishing families were still using the birds for fishing near Kangshan, Yuan said.

"Compared with modern technology, cormorant fishing has a lot of disadvantages," Yuan said.

"The birds are difficult to raise and are not that efficient at catching fish, and that's partly why many people do not want to raise them anymore."

Xu Fuhua, 52, another local who has kept cormorant fishing alive, said training the birds is very technical. "You should feed the baby birds with chopped fish, and make great efforts to train them how to catch fish," Xu said.

Ten years ago, the provincial government listed cormorant fishing on its intangible cultural heritage list. However, only nine families in Kangshan still keep cormorants, which number 153.

"We are quite attached to these little birds. They are like family," Yuan said.

The villagers have voiced support for the latest fishing ban, but they worry over the future of the birds, as well as the survival of the traditional fishing method. Yuan turned to village official Zou Xiongchun for help. Zou said he was sympathetic to their concerns.

"I used to raise cormorants myself, so I understand their feelings," Zou said. "There is a special bond between people and the birds, and it is also important to pass the tradition on."

Local officials reported the case to the county government, which replied that it is important to protect both the environment as well as the fishing tradition.

Given that the 153 cormorants will not pose a threat to the environment, the government has allowed the fishermen to continue cormorant fishing temporarily in designated waters.

Meanwhile, a tourist attraction near the lake is pointing to a bright future for local fishermen.

"We are developing eco-tourism based on the beautiful scenery and the fishing tradition of Poyang Lake," said local Party official Luo Yangbin."After the tourist attraction is completed, we will invite the fishermen to demonstrate cormorant fishing skills, which will not only help them earn money, but also pass on the tradition."