88 people were rescued at the explosion site of a chemical factory in Yancheng, Jiangsu province, of whom 44 died.

The explosion occurred around 2:48 pm at the Tianjiayi chemical plant in Xiangshui county’s Chenjiagang chemical park, and the fire spread to factories nearby and was still burning as of press time, the government of Xiangshui county said. 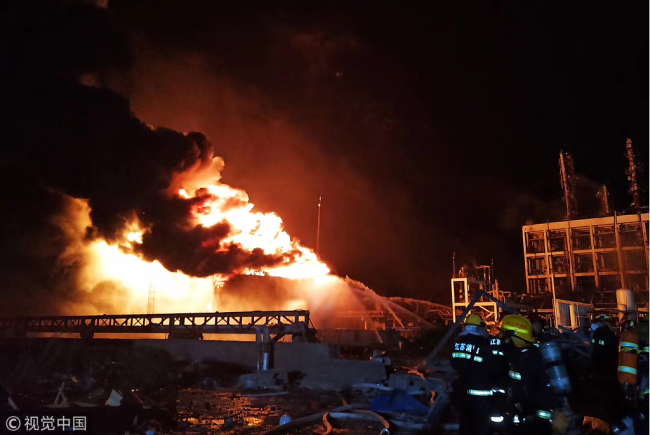 Firefighters put out the blaze at the scene of the accident in Yancheng, Jiangsu province, March 21. (Photos: VCG)

According to the Ministry of Emergency Management, as of 7pm, the firefighter brigade of Jiangsu had mobilized 176 fire trucks with 928 firefighters to join the rescue mission.

The ministry's Party chief Huang Ming and chief engineer Wang Haoshui, together with Zhou Tian, its chief engineer of fire and rescue department, led a team to the site and guided the rescue work. Zhai Qing, vice-minister of ecology and environment, was also with them.

The company, which was established in 2007, is a producer of over 30 organic chemical compounds, including anisole, m-Phenylenediamine and para-Phenylenediamine, many of which are flammable and toxic, according to its website.

Wan Pingyu, professor of applied chemistry at Beijing University of Chemical Technology, said in an interview with CCTV that the leak of the toxic chemicals might have affected the surrounding people and environment. The residents nearby should be evacuated as soon as possible. 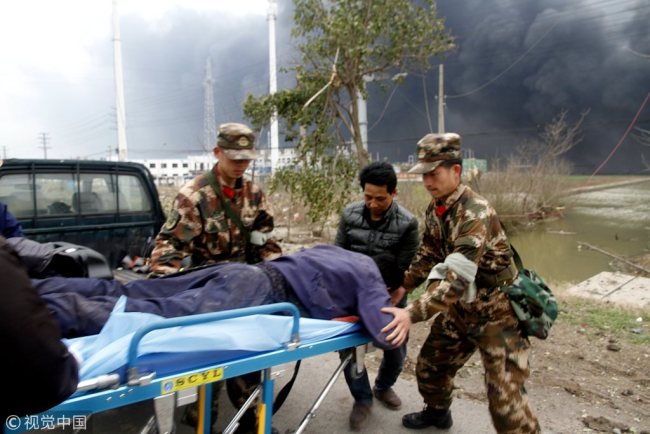 The local police evacuate an injured resident, after a blast ripping through an industrial park killed six in Yancheng, Jiangsu province.

According to the city's environmental protection authority, the explosion had a negative influence on the air quality in the chemical park and its surrounding areas within a 500-meter radius. But the strong winds are expected to lift the heavy smoke.

No residents are living in the chemical park, while all people nearby have been evacuated. And there are no drinking water sources downstream of the accident site, it added.

Footage from the scene shared on Sina Weibo showed massive plumes of black smoke, with an enormous fireball rising over the site. Windows of nearby residential buildings were shattered by the explosion.

According to a report by CCTV, there are also schools and kindergartens in the neighborhood. In a kindergarten about one kilometer away from the explosion site, some children got injured and were sent to hospital for treatment.

The cause of the explosion is being investigated.

The company had been ordered by State Administration of Work Safety Ministry, the predecessor of Ministry of Emergency Management, to rectify its 13 hidden safety hazards in 2018, including leaking valve on its storage tank.

And earlier in 2016, the company was fined by the county's ecological and environmental protection bureau for violating the solid waste management and environmental impact assessment regulations. It was punished again a year later for disobeying air pollution and solid waste management regulations in 2017, according to Qichacha, a data bank that tracks business registration information in China.

China Earthquake Networks Center said on Weibo that an earthquake of 2.2 magnitude struck Guannan county of Lianyungang city, about 30 kilometers away from the explosion site. It's not clear so far whether the two events are related. Because of the massive explosion, a house 550 meters away from the site collapsed.

The province suffered a devastating chemical plant explosion in late 2017 triggered by an equipment failure, which killed 10 people. The biotech company involved was later fined five million yuan ($730,000) and had its permit revoked and its leaders prosecuted.