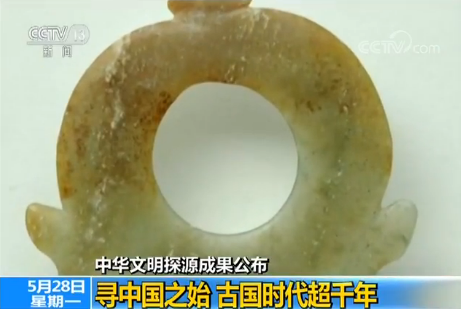 Chinese authorities have announced a slew of new achievements in a massive research project designed to trace the origins of China's 5-thousand year long history.

The study, dubbed the Comprehensive Research in the Origin of the Chinese Civilization and Its Early Development, is designed to figure out how Chinese civilization took shape and how different civilizations in the country became integrated with one another.

The root of the study includes excavations at more than 40 ancient sites, including Liangzhu, Zhejiang, Taosi in Shanxi and Shimao in Shaanxi province.

Since 2001, four different stages of the project have been completed.

Major findings of the excavations have uncovered what is believed to be the earliest dam system in the world, the first imperial palace in China and the prototype of today's Chinese characters.

Guan Qiang with the State Bureau of Cultural Relics says it's believed that Chinese civilization can be dated back to nearly 6-thousand years ago.

"The earliest signs of civilizations turned up some 58-hundred years ago in the lower and middle reaches of the Yellow River and the Yangtze River as well as along the largest tributaries of the Liao River in the southern part of northeast China. From around 53-hundred years ago, we believe all regions across today's China had evolved into a period of civilization."

Chinese researchers have also found that around 38-hundred years ago, a more mature form of civilization had emerged in central China and started to radiate cultural influence, making the area a leading force in the development of the broader Chinese civilization.

They've also confirmed that the origin and early development of Chinese civilization is the result of a process of integration of various different and diverse civilizations.

They suggest this not only led to the foundation of the Xia, Shang and Zhou dynasties, but also to the formation of the multiethnic country that China is today.

Meanwhile, the researchers have also pointed to the influence Chinese civilization has drawn from foreign entities, including the introduction of techniques for wheat cultivation, cow and sheep breeding, as well as bronze smelting.

Wang Wei is a leading researcher involved in the project.

"It has been known for a long time that Chinese civilization dates back over 5,000 years. But how many historical facts do we have to prove it? Whether it's a reality or just a legendary tale is a question of vital importance for the Chinese nation. This research has helped collect evidence, and at the same time, has also been contributing a lot to the study of how the world also developed its various civilizations."

An expert team and a third-party assessment system have also been established to review any information gleaned by researchers.