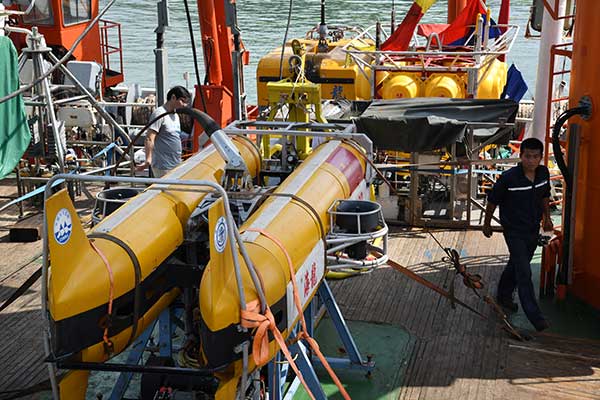 Research vessel Dayang Yihao, or Ocean No. 1, departed its home port in Qingdao, Shandong province and embarked on a 100-day scientific ocean expedition on July 31.

The research vessel will head for areas of seamounts－underwater mountains－in the western Pacific Ocean to investigate resources and the environment. Eighty-seven scientists and technicians from domestic universities and research institutions and 30 crew members are aboard.

“The area is full of mineral resources, such as cobalt-rich crusts and manganese nodules. It’s a hot spot for international seabed expeditions,” said Li Bo, an official with the China Ocean Mineral Resources Research and Development Association, which is affiliated with the Ministry of Natural Resources.

“Around the area are a lot of seamounts of different shapes, where research related to biodiversity and the environment will be mainly focused,” he said.

According to the association, the expedition will carry out deep-sea investigations of marine microplastics and radioactive isotopes. Researchers will also observe ocean birds and mammals.

Sun Lijia, director of the expedition, said the vessel is carrying innovative deep-sea research equipment, such as the submersible vehicle Hailong 11000, and will test its function during the expedition.

Officials from the ministry, which approved the expedition, said scientific ocean expeditions are part of an effort to build China into a strong maritime power and has major significance for the enhancement of deep-water technology, increasing understanding of the ocean and taking advantage of the ocean in a peaceful way.

The Dayang Yihao is a 5,600-metric-ton vessel with equipment for research in geophysics, marine chemistry, biology and acoustics. It has successfully carried out 18 missions.

It is expected to cover 6,700 nautical miles and return to its home port in November.