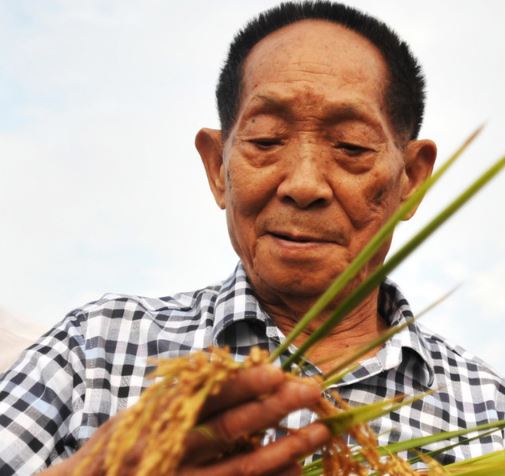 XI'AN, Sept. 26 (Xinhua) -- The saline soil rice R&D team of Yuan Longping, the prestigious pioneer of hybrid rice, is expecting a harvest from a test field in the Loess Plateau, the world's highest soil erosion area.

The test field in Nanniwan, about 50 km away from the city of Yan'an in Northwest China's Shaanxi Province, is among six testing bases selected in May to pilot the team's rice growing technique.

Liu Zhaoliang, from the Qingdao Yuance Biological Group Co. Ltd., said the team has grown the rice in 53 hectares in Nanniwan, and the harvest will be made this week.

He said based on the current rice growing momentum, the per-hectare yield is estimated at 6,000 kg, which can meet the target for the pilot project.

"The barren land has been treated using a soil improvement technique. We have also introduced smart farming technology to help control the growing conditions," said Liu.

The team is known for developing saline-alkali tolerant rice in China's coastal city of Qingdao and completing the first batch of drought-resistant rice varieties in Dubai.

Nanniwan is a highland area, where late Chinese leader Mao Zedong mobilized a campaign in the 1940s, urging a revolutionary spirit to reclaim farmland from the dry soil to become self-reliant on the grain supply.

However, rice fields in Nanniwan have declined from 467 hectares to 20 hectares due to low yield, as traditional farming can only reap about 3,000 kg of rice per hectare, which is far lower than the averaged yield in plain areas.

Liu said the team plans to take three to five years to recover the rice fields back to 467 hectares in Nanniwan and achieve a per-hectare yield of 9,000 kg.

About two-thirds of the people in China depend on rice as a staple food. Yuan, who developed the world's first hybrid rice in 1974, has set multiple world records in hybrid rice yields in previous years. The latest record was set in the super hybrid rice field in southwest China's Yunnan Province -- 17 tonnes per hectare.