While a ban on dining in restaurants and gatherings of more than two people has taken effect on Wednesday in Hong Kong to tackle the worsening COVID-19 outbreak, local residents are calling for even stricter anti-epidemic measures and citywide screening to curb new infections, after the number of daily new cases in the city has surpassed 100 for eight consecutive days as of Wednesday. 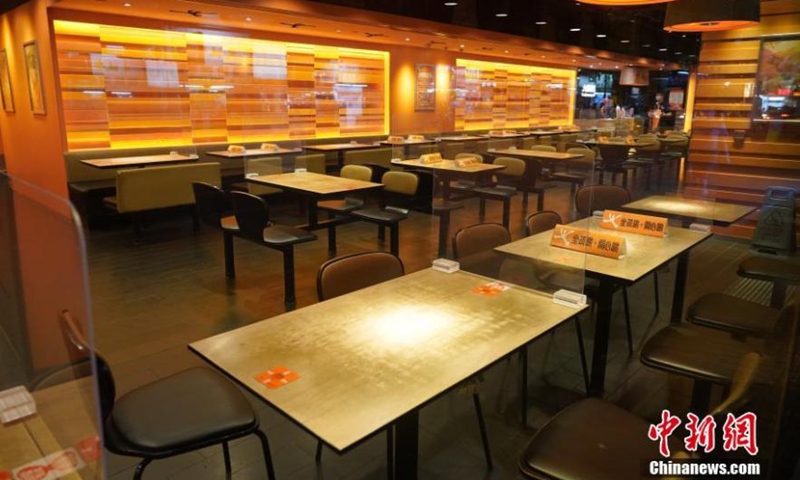 Photo shows an empty restaurant in Hong Kong, July 27, 2020. Hong Kong announced further tightening of anti-epidemic measures, including prohibition of dining-in services in restaurants and mandatory mask-wearing in all public places, which will come into effect on Wednesday. (Photo:China News Service)

The number of confirmed COVID-19 cases in Hong Kong reached 3,003 as of Wednesday, among which over half - more than 1,700 - were discovered this month, with 24 dead, media reported.

Hung Kam-in, convenor of the City Think Tank of Hong Kong, said that every day as he and other community workers wait for the health department's daily update, they pray there will be no new cases in the community they serve and that new cases in the city as a whole will decline as Hong Kong's medical system is already overwhelmed.

Hung called for citywide screening as was done in Wuhan and Beijing, noting that 22 clinics and with a capacity for 110 COVID-19 tests is far from enough.

Hung also called on the local government to accelerate introducing medical teams from the Chinese mainland as they are more experienced in dealing with COVID-19, had successfully put the pandemic under control on the mainland and provided support to many foreign countries in fighting the disease.

The central government will provide necessary support to Hong Kong to fight COVID-19, the National Health Commission said on July 24.

This outbreak started in early July. Some experts said that it is caused by imported cases from Europe, especially those who were exempted from quarantine when entering Hong Kong, due to a relaxation in control and prevention measures since late June. Others noted that illegal gatherings in early July despite the government's social distancing policy should be blamed for the rapid worsening situation.

So-called primaries for the Legislative Council (LegCo) elections organized by the Hong Kong opposition camp on July 11 and 12 were a major blasting fuse for the outbreak, experts said.

The Hong Kong government announced on Monday a ban dining-in in all local restaurants and gatherings of more than two people starting from Wednesday.

The ban is aimed at reducing daily new infections and to alert local residents, Jin Dongyan, a biomedical professor at the University of Hong Kong, told the Global Times on Wednesday, noting that it  would help curb community transmission of the virus.

On the first day the ban took effect, people were lining up outside supermarkets and stocking up on food and drinks, a Hong Kong resident surnamed Wong told the Global Times on Wednesday.

With daily infections topping 100 with some from unknown sources, Hong Kong is now facing a grave challenge, Wong said.

Hong Kong reported 106 new cases on Tuesday with the source of infection of 50 of them as yet unidentified, Xinhua reported.

Schools have instituted stricter anti-epidemic measures, halted all activities and moved up summer breaks to ensure the safety of students and school staff, Wong said.

A student from Hong Kong Polytechnic University surnamed Chen told the Global Times that she wears a mask indoors or even when she runs in the campus to protect herself and others from virus.

Hong Kong's situation is also worrying neighboring Shenzhen. On July 24, Shenzhen suspended reciprocal recognition of the health status check with Hong Kong that waived mandatory quarantine on inbound travelers even if they have completed a 14-day medical observation in Hong Kong.