Residents relocated, flights to be canceled in Hong Kong as typhoon Mangkhut nears 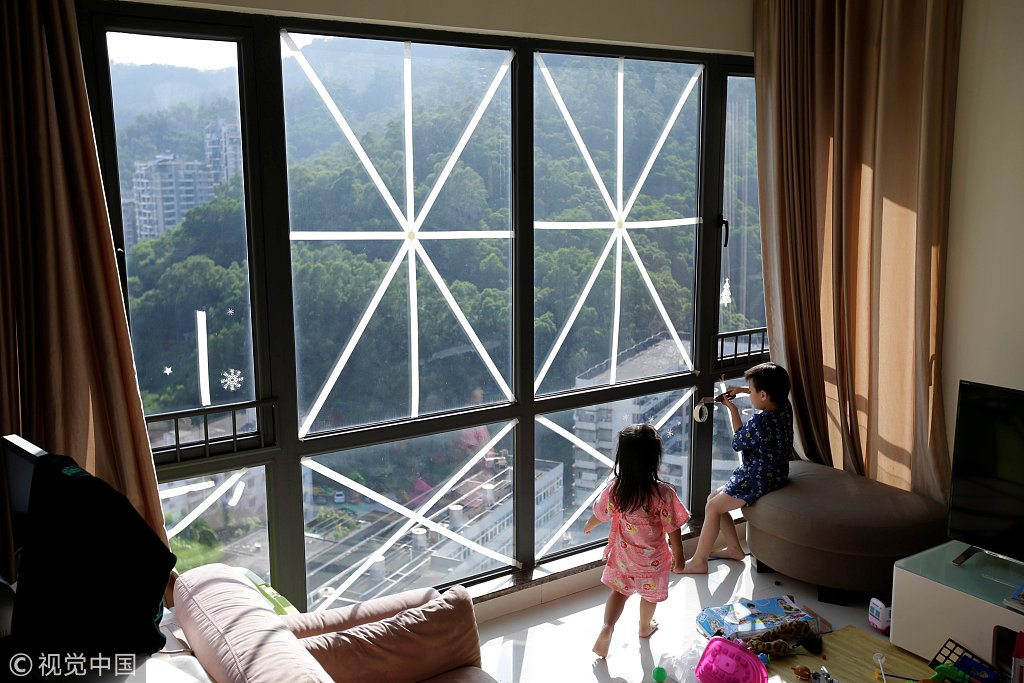 A brother and his sister play at a living room with windows taped in preparation for Typhoon Mangkhut, in Shenzhen, Guangdong Province, on September 15. (Photo: VCG)

HONG KONG, Sept. 15 (Xinhua) -- Some residents living in lower areas have been relocated on Saturday and flights will be canceled on Sunday as super typhoon Mangkhut approaches China's Hong Kong Special Administrative Region.

Most flights on Sunday will be canceled, affecting about 100,000 passengers, according to the Airport Authority Hong Kong.

Hong Kong Airlines announced to suspend operation on Sunday. It said in a statement that it will cancel all fights in and out of Hong Kong from 2:30 a.m. local time on Sunday.

Other airlines operating across the region made similar cancelation plans.

A typhoon signal No. 8, the third highest, is likely to be hoisted as early as 11 p.m. on Saturday night, according to the Hong Kong Observatory.

The weather in Hong Kong is forecast to turn bad significantly on Sunday, when Mangkhut is expected to be the closest to Hong Kong.

Both the government and local residents have been taking various measures to minimize the typhoon's impact, including the installation of flood barriers at low-lying areas which are vulnerable to flooding, such as Tai O in Lantau Island and Lei Yue Mun in Kowloon.

As a local practice, many residents have their large windows taped up in various radical patterns, believing that this could protect the windows in storms.

Some shops and underground parking lots closed earlier on Saturday and packed sand bags at their doors to prevent flooding.

Mangkhut has left at least three people dead after it hit the northern Philippines on Saturday.