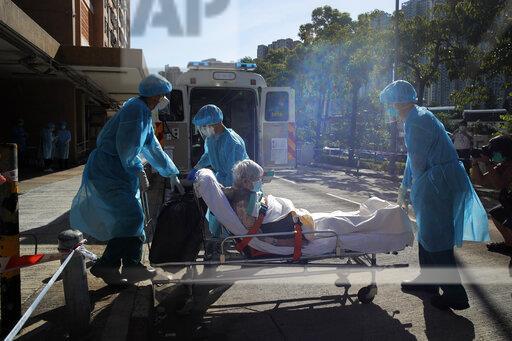 An elderly woman who is a resident of The Salvation Army Lung Hang Residence for Senior Citizens is evacuated from the nursing home on Friday by Centre for Health Protection medical workers after a cook and a cleaning staff member at the home in Hong Kong contracted the coronavirus. (Photo: AP)

The makeshift hospital, built with the help of mainland experts inside the AsiaWorld-Expo, near the airport, opened on Saturday. It has 500 beds and could accommodate a maximum of 2,000 patients in the future.

The hospital has 31 lavatories, six mobile showers and two public lounges with sofas, tables and televisions, officials said, adding that another 18 showers will be installed.

There are nine nurses and two doctors on duty during the day shift, and five nurses on during the night shift, according to the Hospital Authority.

On Saturday, the makeshift hospital admitted about 20 patients with mild COVID-19 symptoms. After admission, patients are given a deep-throat saliva test daily and a blood test every three days.

The city's first mobile-cabin hospital was established in seven days, with mainland experts supporting its design, construction and management.

As of Sunday, Hong Kong had recorded triple-digit new infections for 12 consecutive days. By July 31, the Hospital Authority said, more than 100 patients with the disease had not been sent to hospitals because of a quarantine bed shortage in public hospitals.

Taxi driver Tso Tag-ming said on Sunday he is thankful to the central government for helping the city in these difficult times.

Tso said his life has been hard because the city's taxi drivers' average income has dropped more than 70 percent owing to the pandemic.

With the assistance of the mainland, Tso said he hopes the situation will be brought under control and all residents will be able to get back to living their normal lives.

Pamela Chan, a retired nurse who took part in the city's fight against SARS in 2003, said she welcomes the team of mainland experts sent to Hong Kong by the central government.

Noting the city's public healthcare system is approaching its limit and local frontline medical workers are under great pressure, Chan said it is a natural and reasonable move for the central government to send experts to Hong Kong, a Chinese city, to fight the ravaging epidemic.