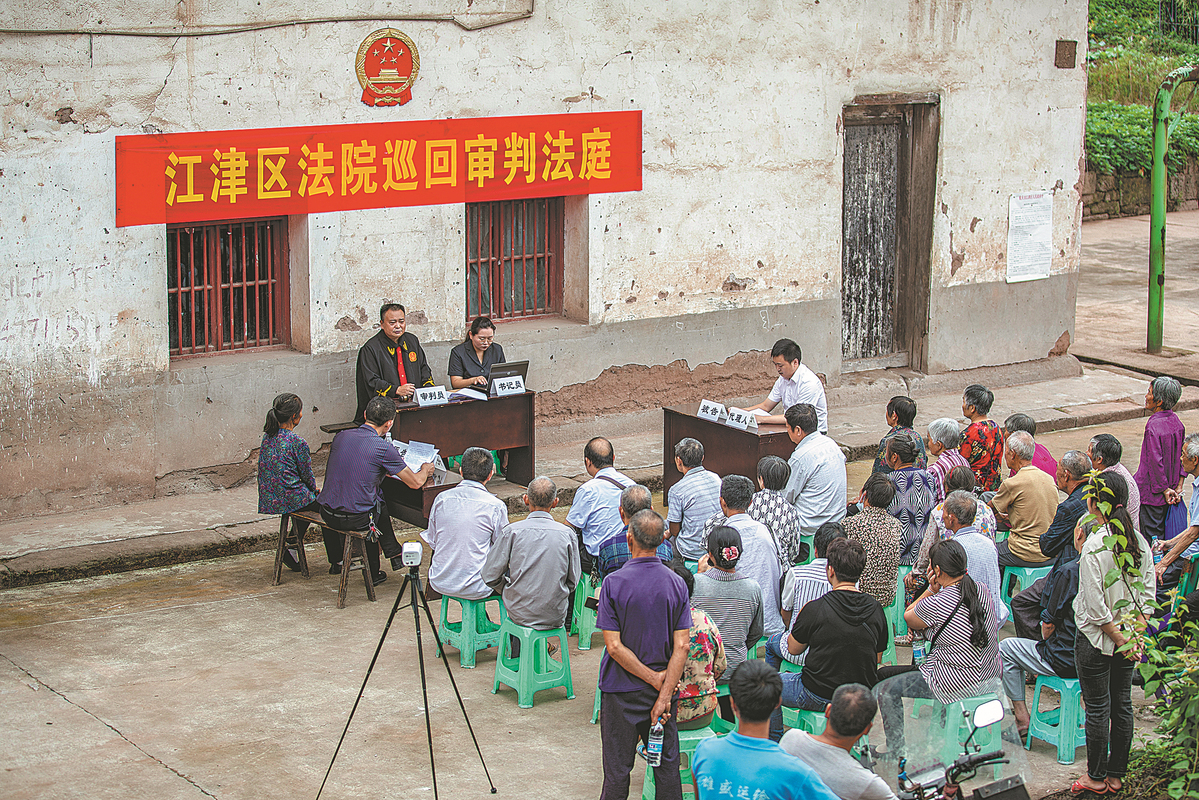 Grassroots judges hear a case at a circuit court in Wenchang, a village in Chongqing, in September 2021. The country has been sparing no effort to advance the rule of law at the grassroots level. (Photo: Xinhua)

A key report to the just-concluded 20th National Congress of the Communist Party of China has demonstrated the significance of advancing the rule of law and exercising law-based governance on all fronts, a senior official said.

"The report had for the first time a full chapter for the rule of law, which fully reflects that the central leadership has attached great importance to overall law-based governance," said Chen Yixin, secretary-general of the Commission for Political and Legal Affairs of the CPC Central Committee.

Chen made the remark while introducing and interpreting the report at a news conference on Monday.

Law-based content has made clear the Party's firm determination to unswervingly advance the rule of law, he said.

"It has shown that the CPC is a political party that dares to undertake revolution, is good at construction and has the courage to reform, but moreover believes in and upholds the rule of law, and anchors the country under the rule of law."

Chen said such content has enriched Xi Jinping Thought on the Rule of Law and could be regarded as the Party's guiding document in exercising China's law-based governance.

"It has also further deepened and expanded the work of our Party and nation in the new era, indicating that the rule of law will be exercised in every aspect and has become the CPC's main means of governing the country," he added.

The report, delivered by General Secretary Xi Jinping on Oct 16 at the opening ceremony of the 20th CPC National Congress and adopted by the congress on Saturday, highlights that the comprehensive advancement of law-based governance has been a profound revolution in China's governance.

It stated that law-based governance and the law-based exercise of State power begin with compliance with the Constitution.

"We will step up legislation in key, emerging and foreign-related fields and advance the rule of law in domestic and foreign-related affairs in a coordinated manner, so that good laws are made to promote development and ensure good government," the report said.

To implement the requirements, the top legislature said it will complete major legislative projects forwarded by the Party in a timely manner.

Zang Tiewei, spokesman for the National People's Congress Standing Committee's Legislative Affairs Commission, said on Monday that the top legislature will strengthen the implementation and supervision of the Constitution, giving the fundamental law a larger role in national governance.

In the future, Zang said, they will step up legislation in key, emerging and foreign-related fields and advance the rule of law in domestic and foreign-related affairs in a coordinated manner to meet the nation's development needs and respond to public concerns.

"We will carry out whole-process people's democracy in legislation, with more focus on grassroots sources for collecting legislative suggestions," he added.