Medical institutions and authorities at all levels are ramping up efforts to allocate resources to relieve pressure among medical institutes. 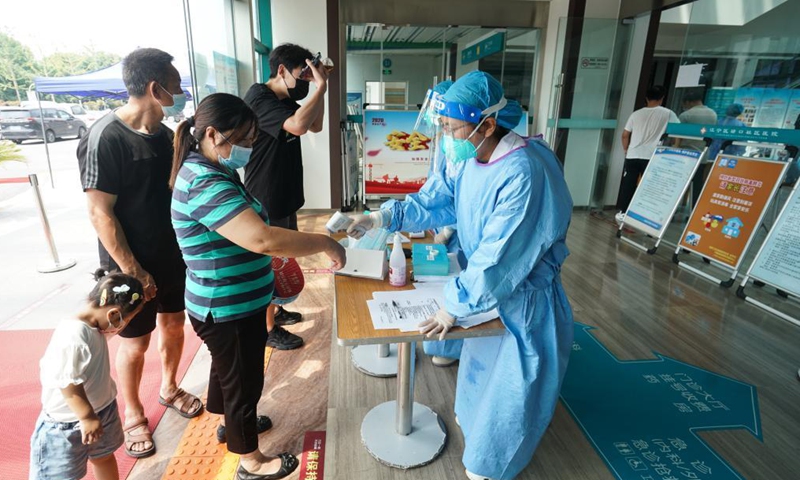 Residents have their body temperature checked at the entrance of a community hospital in Lukou Subdistrict, Jiangning District of Nanjing, east China's Jiangsu Province, Aug. 26, 2021. (Photo:Xinhua)

Medical treatment is the current focus of the country's epidemic prevention and control. The country is allocating medical resources accordingly, based on the epidemic situation and the urgency of disease, Mi Feng, spokesperson of the National Health Commission, told Thursday's press briefing.

It is difficult to train medical staff in a very short time but medical institutes could allocate more manpower from upper-level medical institutes or rehire medical personnel who retired in the past five years to alleviate the huge pressure that medical institutions are undergoing, Nie Chunlei, an official with the NHC, suggested.

Despite the cold winter in Beijing, lines of patients are waiting in front of fever clinics. On December 12, the daily number of patients in the fever clinics of Beijing hospitals reached 22,000, 16 times higher than a week earlier.

To relieve the pressure and reduce the lines in front of fever clinics, many cities are setting up new fever clinics. In Beijing, the number rose to 303 from 94 previously, of which 235 are open 24 hours and 100 can receive child patients. More than 340 local community centers have also set up fever clinics.

Besides boosting fever clinic capacity, East China's Zhejiang plans to increase inpatient beds to at least 100,000 before the end of December and the percentage of beds for severe cases is to be no less than 4 percent of the total beds.

Family doctors are also encouraged to play their role better. Mi Lan, a doctor from Shanghai's Xietu Street community health center, said that her center has 139 doctors and nurses to serve more than 70,000 people.

Family doctors will provide medical consultations and have better connections with residents. Sometimes, they pay home visits to learn the health status of their patients, Mi told Thursday's press briefing.

Some hospitals in Beijing, Shanghai and Chongqing have started asking medical workers with no or mild symptoms to work to relieve the pressure, media reports said.

A doctor from Chaoyang Hospital of Beijing who preferred to be called Yaning told the Global Times the situation in some departments is not that bad. If medical staff test positive for the virus, they are allowed to take some days off until they are fully recovered.

"My hospital has mobilized medical personnel from other departments to take turns in the fever clinic, with about 50 people per shift. But even so, there is a lot of pressure on medical stafferss due to the large number of people and long waiting lists," said Zhao Zhuxiang, a director from the infectious disease department of Guangzhou First People's Hospital.

"After the COVID-19 response measures were optimized, the infection of a large number of medical staff became inevitable," Wang Guangfa, a respiratory expert from Peking University First Hospital, told the Global Times.

Whether in outpatient or inpatient departments, there are always infected people who are still in the incubation period. They probably could spread the virus to medical staff or other patients, and this is commonly seen in hospitals around the country, Wang said.

Asymptomatic medical staffers and those infected with mild symptoms sticking to their work is like what we do during a war -- a light wound would not mean skipping the forefront. Guaranteeing that fever clinics are able to run 24 hours a day and providing service for severe patients is the focus of the current epidemic prevention, Zeng Guang, a former chief epidemiologist of the Chinese Center for Disease Control and Prevention (CDC), told the Global Times.