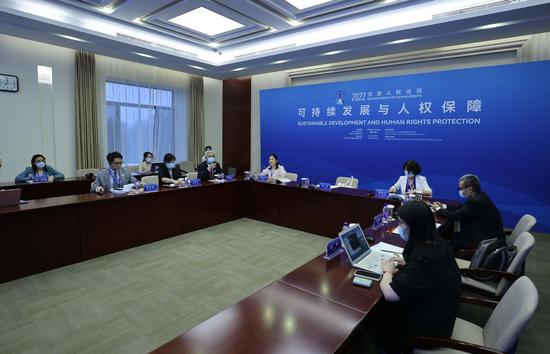 The Beijing Forum on Human Rights is held in Beijing on Tuesday. (Photo/Xinhua)

The cause of human rights will be best served when global cooperation is improved and when geopolitical and ideological tensions are reduced, experts said at the Beijing Forum on Human Rights, hosted by the China Society for Human Rights Studies and the China Foundation for Human Rights Development.

Padma Choling, vice-chairman of the Standing Committee of the National People's Congress, China's top legislature, and the president of the China Society for Human Rights Studies, said each country has the right to choose their own human rights development paths and their choice should be respected.

The use of human rights as a political tool to create conflicts and interfere with the affairs of others has severely restrained global human rights development, he said.

"Countries need to create an international environment that can support quality and sustainable development, so they can prosper together. And prosperity is the foundation of human rights improvement," he added.

Danilo Turk, former president of Slovenia, said at the forum that in the construction of the global human rights system, many voices were heard and many new ideas were included. Priorities of human rights development vary from one society to another, from one country to another.

"In areas that suffer from pervasive poverty, it's important to give priority to overcoming poverty. In areas of armed conflict, the establishment of peace and respect for human life, liberty and security of the human being is paramount," Turk said.

He urged the human rights bodies of the United Nations to put more effort in minimizing the dangers of politicization.

"Some states go even further and use human rights as a political tool. Political selectivity and double standards have harmed human rights in the past. This problem continues to be a cause of concern today as well," he said, adding that the need for global cooperation has never been as urgent as it is today.

"Cooperation should be given precedence over competition and confrontation. This is not only a political and developmental requirement. This is also a requirement of human rights," Turk said.

Bhofal Chambers, speaker of the House of Representatives of Liberia, said the Chinese government and people have made and continue to make valuable contributions toward the promotion and maintenance of global human rights, which appear in various forms, shapes and approaches.

"China has been one of Liberia's strongest development partners when it comes to meeting the socioeconomic development needs of the Liberian people, especially women and children. China's support in this area comes in the form of mitigating the challenges of health and sanitation, equipment and materials for skills training programs and food distribution to struggling mothers, especially single parents," Chambers said.

Many speakers at the forum said COVID-19 outbreaks have once again demonstrated that humanity is a community with a shared destiny and joint efforts are required in improving human rights for all.