Liu Hongchuan opened a restaurant together with 10 friends who — like him — have disabilities, in the Shunde district of Foshan, Guangdong province, last month. 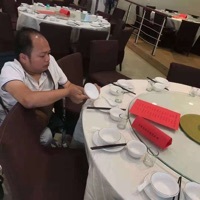 Liu Hongchuan checks the dishes at the restaurant he opened last month with 10 of his friends in the Shunde district of Foshan, Guangdong province. All the partners have disabilities. [Provided to chinadaily.com.cn]

"We only accept shareholders with disabilities so that they can live a better life. I know the difficulty they have in finding a job," Liu said.

Liu, 38, once ran a successful restaurant in Zhanjiang, Guangdong, his hometown. Now, with about 15 years of experience, he is confident about the new restaurant's future.

It serves Cantonese and Sichuan-style food and in winter focuses on hotpot mutton.

Most of the 11 shareholders of the new restaurant are former athletes. Wu Tongyu, one of the shareholders and a native of Zhanjiang, had taken up wheelchair dancing, a strenuous activity. Chen Mantang from Guangzhou began racing wheelchairs in 2008.

Wu Yiying contributed to this story.