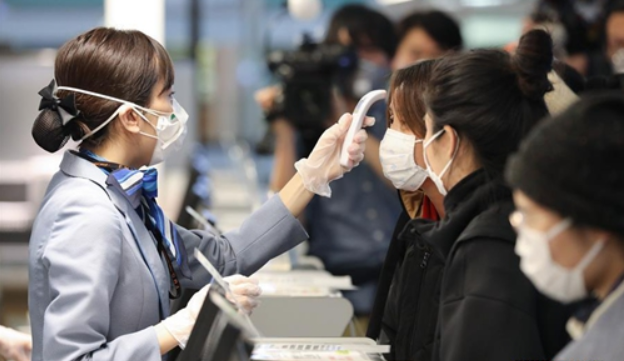 A staff member checks passengers' body temperature before their departure for Wuhan at the airport counter of Spring Airlines at Tokyo International Airport in Tokyo, Japan, Jan. 31, 2020. (Photo: Xinhua)

Chinese authorities on Wednesday urged certain countries and regions to remove administrative restrictions on international flights and travelers from China amid the novel coronavirus pneumonia (COVID-19) outbreak, as the World Health Organization (WHO) and other international institutions have recommended.

Some countries and regions have overreacted in their measures with regard to the epidemic, such as suspension of international flights to and from China or imposing immigration controls, even though the WHO opposes any restriction of international travel and trade, Liang Nan, director of the Department of International Affairs at the Civil Aviation Administration of China (CAAC), said at a press conference.

These administrative orders and restrictions have had a negative impact on the international aviation market, and caused significant inconvenience to travelers, including both Chinese nationals stranded overseas and foreign citizens unable to return home, Liang said.

The CAAC has been reporting epidemic prevention measures taken by China to the International Civil Aviation Organization (ICAO) in a timely way, and enhanced communication with other countries and regions, Liang said.

He stressed that certain countries and regions should comply with recommendations of not restricting flights to and from China by international organizations and carefully consider adopting restrictive measures.

"In particular, airlines should not be ordered to suspend flights by government administrative orders, to minimize the negative impact of the epidemic on the international air transport market," Liang said.

While it is understandable that some countries imposed certain restrictions in the early phase of the outbreak, the restrictions should be reduced since epidemic prevention in China has achieved progress and the world has acquired more knowledge about the virus, Qi Qi, a Guangdong-based industry expert, told the Global Times on Wednesday.

The spread of the virus is not determined by race and it has no national boundaries, so simply banning the entry of Chinese travelers will not isolate the virus, Qi noted.

The ICAO on February 4 said in a statement that it supported the WHO's recommendation that all countries not impose restrictions inconsistent with the International Health Regulations.

"Exceeding [the WHO's] recommendations without having conducted an appropriate risk assessment could lead to unnecessary and negative impacts, especially for the many vulnerable or isolated populations which rely so importantly on their global aviation connections," the statement said.

The aviation authorities of more than 40 countries have responded positively as of Tuesday, and expressed appreciation and support for China's epidemic prevention measures, Liang told the conference.

According to information from China's National Immigration Administration on Tuesday, all travelers from or those who transfer from the Chinese mainland are not allowed to enter Australia within 14 days after leaving the Chinese mainland, except for Australian citizens, permanent residents and their direct relatives, who need 14 days of quarantine after landing in the country.

Kyrghyzstan has suspended all flight services to and from China, as well as visa grants to Chinese citizens.