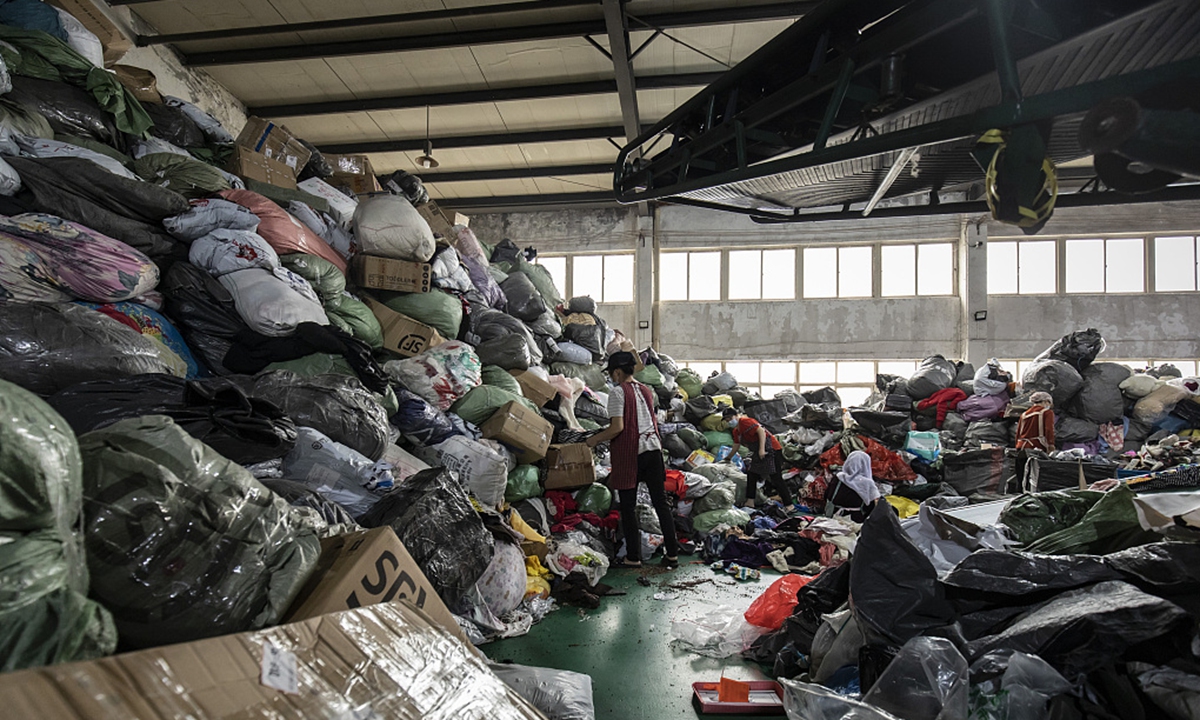 When Zheng Yingying, a 27-year-old fashion blogger faced piles of clothes lying about in her apartment, she decided to do something about it by contacting a recycling service for old clothes on Xianyu app, a major "idle goods" online trading platform in China. Within 24 hours, a third of her closet was empty.

Zheng is also a frequent buyer of a "new" vintage getup from second-hand clothing sellers on Taobao. Her chic outfits have earned countless accolades on her blog.

The trend isn't exactly new to China, where the retro-fashion business has grown in recent years.

Many Chinese consumers are realizing that recycling their old and long-idle clothes is environmental friendly. Experts told the Global Times that the recycling rate of used clothing in China is about 30 percent and this ratio is bound to rise in the future.

With increased consumer purchasing power, China has become one of the world's largest retail clothing markets, which creates the dilemma of disposing of used clothing. About 26 million tons of used clothing goes into the trash every year, and less than 1 percent is recycled, according to the statistics from the China Association of Circular Economy (CACE).

A survey by Xianyu showed that each family in China is responsible for 30kg of unused clothing every year. Recently, many enterprises have begun to turn waste into treasure, and make a profit while eliminating a pollution problem.

"As much as 95 percent of discarded clothing is recyclable," Li Xiaoping, a manager of a Guangzhou-based used clothing recycling company, told the Global Times.

Li's company runs a textile recycling plant, where clothes are sorted manually and the more intact items are disinfected, ironed and sold as second-hand or donated to poor areas through charity organizations.

Li noted that top-quality clothes sell for between 6,000 to 9,000 ($1,300) yuan a ton. Newer summer clothing will be exported and sold to NGOs in tropical regions including Africa and the Middle East at an average price of about 5,000 yuan a ton.

Tattered clothes can be transformed into textile crafts or converted into agricultural insulation for greenhouses, industrial rope, gloves, and carpets.

Li is hopeful the recycling of used clothing is growing, pointing out that more companies are getting involved.

"In the past, old clothes were not included in the material recycling system. With the innovation of disinfecting technology and decomposition process, and the introduction of specific technical standards and regulations, an industrial chain of high added value and utilization ratio of old clothes has presented a certain scale," Zhao Guoliang, a researcher in comprehensive utilization technology of waste textiles from Beijing Institute of Fashion Technology told the Global Times.

According to the Report on the Development of the Comprehensive Utilization of Textile Waste in China (2018-2019) recently issued by CACE, in 2018 the utilization of waste textiles in China was about 3.8 million tons, with a utilization rate of about 19%.

Xianyu has set up many rewards to encourage users to donate old clothes, such as exchanging idle, used cloths for apples or packets of paper towels. During the pandemic, they also provided masks, disinfectant and other anti-epidemic items.

Nowadays, more people realize that disposing of old clothes is huge environmental issue. According to a report issued by Ellen MacArthur Foundation, the clothing industry accounts for about 10 percent of global carbon emissions, more than the aviation and shipping industries combined. While research indicates that every kilogram of clothing recovered will reduce 3.6 kilograms of carbon dioxide emissions.

Zhou Yue, director of Xianyu's old clothes recycling program told the Global Times that each donation of used clothing helps to improve people's understanding of the circular economy, which turns idle things into recycled goods and transforms waste into a useful product.

"Pre-owned retail services not only offer ways for shoppers to keep their wardrobes varied, but also promote the environmentally friendly concepts of used clothing. Extending the service life of clothing is an important means of saving energy," Zheng told the Global Times.