Returning US forces to Taiwan will ‘trigger reunification-by-force operation’ 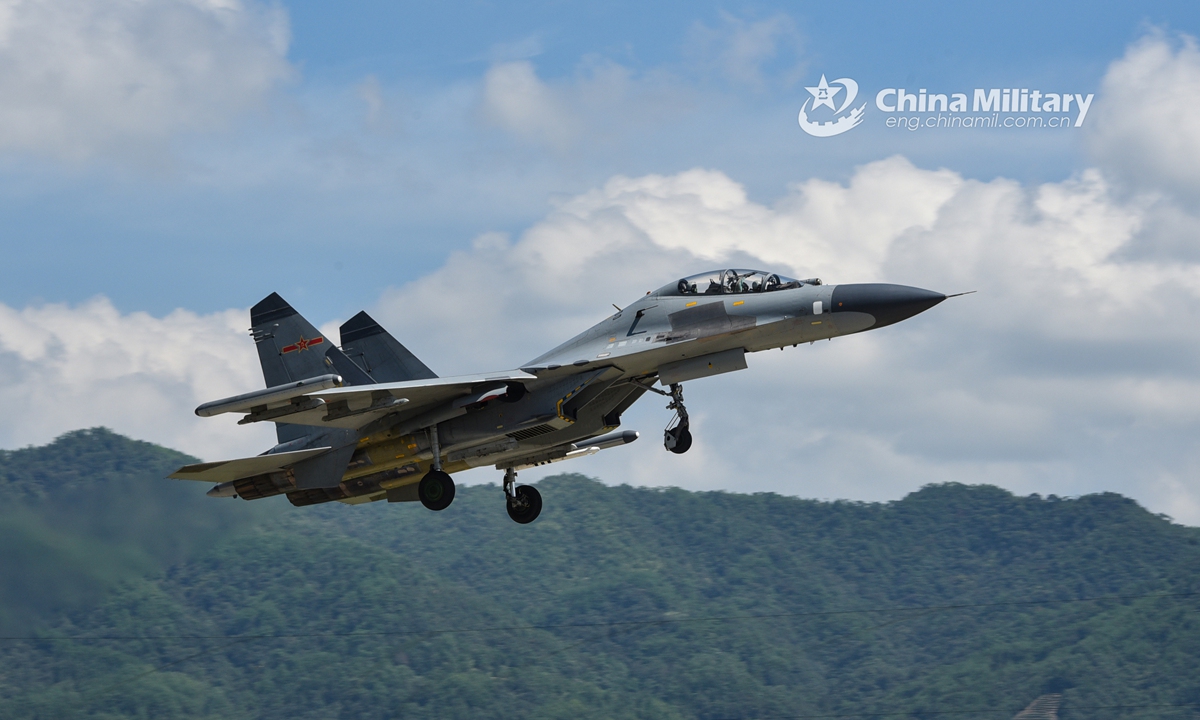 A fighter jet attached to an aviation brigade of the air force under the PLA Eastern Theater Command soars into the sky during a round-the-clock flight training exercise on September 17, 2020. Airmen with the aviation brigade fully studied the changes in weather, bird activity, equipment performance and other aspects brought about by seasonal changes, so as to practice the basic skills of aerial combat to the best. (eng.chinamil.com.cn/Photo by Fu Gan)

Amid ongoing large-scale exercises by the Chinese People's Liberation Army (PLA) in the Taiwan Straits targeting foreign interventions and Taiwan secessionists, an article recently published in a US military journal urged the US to consider returning US forces to the island, a move that would break the Three Joint Communiqués between China and the US that stipulated all US forces and military installations withdrawn from the Chinese island.

This crazy suggestion does no good for people in Taiwan, and if it was to come true, the PLA would take resolute military action and realize reunification by force, Chinese mainland analysts said on Thursday, citing China's Anti-Secession Law.

In an article titled "Deterring the Dragon: Returning US Forces to Taiwan" published in the September-October 2020 issue of the Military Review, the professional journal of the US Army, Captain Walker D. Mills of the US Marine Corps said that the US needs to consider basing ground forces in Taiwan as the balance of forces in East Asia continues to tip in favor of the PLA.

Mills claimed that the presence of US ground forces could not only repel a PLA cross-Straits operation but also serve as a tripwire that would inevitably trigger a wider conflict not acceptable to the Chinese mainland.

Another article in the journal said the US Army should provide a corps of two-to-four divisions plus supporting units to spearhead offensives against the PLA bridgeheads.

If the US does deploy troops to Taiwan, it not only breaks the Three Joint Communiqués fundamental to China-US diplomatic relations, but also triggers articles in China's Anti-Secession Law and enables the state to employ non-peaceful means and other necessary measures to protect China's sovereignty and territorial integrity, Chinese mainland analysts said.

Despite that the US has been enhancing military cooperation with Taiwan island, including sending military consultants, the US military has remained cautious in stationing troops in the island, because it knows this kind of action will send China-US relations back to pre-1979 level, a status of confrontation, Song Zhongping, a Chinese mainland military expert and TV commentator, told the Global Times on Thursday.

The US would have to weigh and consider balance, Song said.

The US must think twice and not challenge China's bottom line on its core interests such as the Taiwan question, Song said, noting that the PLA will not hesitate to fight, but to the US, Taiwan island is only a cash cow and pawn to pin down the Chinese mainland, and the US will abandon the island if it hurts US interests.

China's Anti-Secession Law states that, in the event that "Taiwan independence" secessionist forces should act under any name or by any means to cause Taiwan's secession from China, or major incidents entailing Taiwan's secession from China should occur, or possibilities for a peaceful reunification be completely exhausted, the state shall employ non-peaceful means and other necessary measures to protect China's sovereignty and territorial integrity.

A potential US military deployment in Taiwan would fall into the second and third scenario that may trigger a PLA reunification-by-force operation, observers said.

In such an event, the PLA would initiate operations using naval and air forces to lockdown the island of Taiwan, cut off its connection with the outside world and stop US forces from further intervening, a Beijing-based expert on military affairs told the Global Times on Thursday under the condition of anonymity.

In a possible next step, the PLA could launch a full reunification-by-force operation, the anonymous expert said.

The US Army journal article has also garnered heated discussion among politicians in Taiwan, with neither Democratic Progressive Party nor Kuomintang representatives believing it would be a good idea.

Democratic Progressive Party "legislator" Lo Chih-Cheng said on Wednesday that US forces stationed in Taiwan would not necessary build up deterrence, and Kuomintang "legislator" Lee De-wei said while the US could continue arms sales to Taiwan, it is unlikely to send troops to the island, the Voice of America reported on Wednesday.

The anonymous expert said that the PLA has built up strong deterrence with recent military exercises in the Taiwan Straits, and the Taiwan authorities currently do not want Washington to challenge Beijing to provoke a real cross-Straits military conflict, turning it into cannon fodder.

The author of the article, a captain, is not a high-ranking officer, so it does not necessarily represent a strategic decision of the higher-ups in the US government and military. The US journal Military Review is US Army-affiliated, so it stresses the importance of ground forces, but it is questionable what role they could play compared to air and naval forces, which are more practical. Ground troops would only become meat shields and hostages, and the US would not risk this, the expert said. 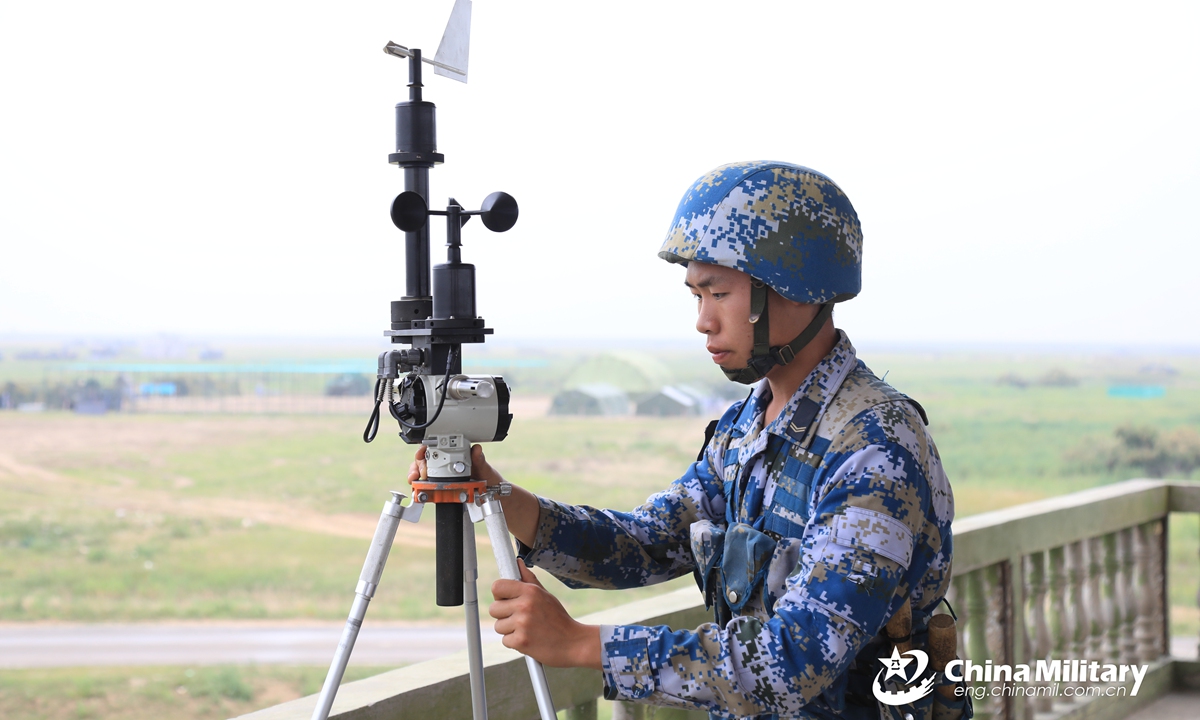 A marine assigned to a brigade of Marine Corps under the PLA Navy uses a device to monitor the meteorological conditions prior to a recent live-fire training exercise. (eng.chinamil.com.cn/Photo by Shang Wenbin)

The ongoing live-fire exercises in the Taiwan Straits by the PLA demonstrate its determination and capability to safeguard national sovereignty and territorial integrity. The drills are aimed at intervention from foreign forces, "Taiwan independence" secessionists and their secessionist actions, Senior Colonel Tan Kefei, a Chinese Defense Ministry spokesperson, said at a regular press conference on Thursday.

As part of the exercises, the PLA has flown dozens of warplanes including bombers, fighter jets and anti-submarine warfare aircraft near Taiwan island since Friday, according to the island's "defense authority."

The two aircraft carriers from the PLA Navy, the Liaoning and the Shandong, have also recently completed regular exercises and sea trials respectively, Tan announced at the press conference.

The exercises and trials by the two aircraft carriers sparked tensions on the island of Taiwan, as the military on the island feared a potential island encirclement patrol by the two carriers, Taiwan media reported earlier this month, when the two carriers embarked on voyages, with mainland experts saying the warships could play important roles in a potential reunification-by-force operation by attacking the island from different sides and intercepting a possible US intervention.

Regardless of what action the US military takes, the PLA would maintain a strategic focus, which is to continue preparing with exercises aimed at the secessionists and foreign interventions, Song said, noting that the PLA should prepare for a worst-case scenario, in which the US and Japan both intervene.