Reviewing and forecasting the Chinese economy

A seminar entitled "2019 China Outlook: Two Sessions Review" was held on Tuesday by the Guanghua School of Management of Peking University. It focused on key issues in the Chinese economy that drew heated discussion during the two sessions.

The seminar featured four Guanghua professors interpreting policies and sharing their insights on the obstacles and the future trends of China’s economic reform and development. Senior diplomats from 28 countries attended the event. 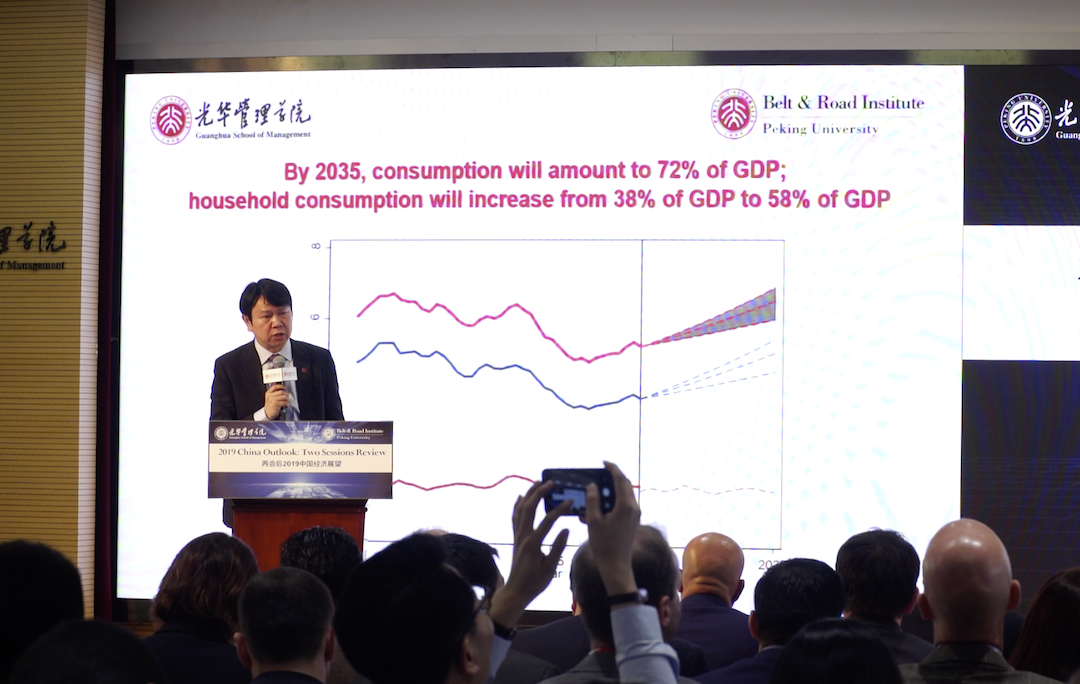 Liu Qiao, dean of Guanghua, gave a speech entitled “The long-term structural challenges of the Chinese economy.” 2035 has been named a benchmark year when socialist modernization is supposed to be fully established. To reach that goal, there is “a list of must-dos” to promote future reform and development, said the dean.

He pointed out that to realize economic modernization, the long-term challenges that China's economy needs to overcome include maintaining a high annual total factor productivity (TFP) after completing the industrialization process; reforming the modern industrial structure to match economic modernization; realizing a re-allocation of labor; dealing with the challenges brought about by the aging population and urbanization; improving research and development efficiency and investment efficiency in order to reshape the micro-foundation of economic development; solving the problem of unsatisfactory urban population distribution which has become one of the root causes of housing market problems as well as the low efficiency of infrastructure investment; and increasing the consumption rate and the position of China in the global value chain. Based on the reform agenda, Liu said the overall strategy is to reform and open up the economy more thoroughly to give the market a decisive role in resource allocation. 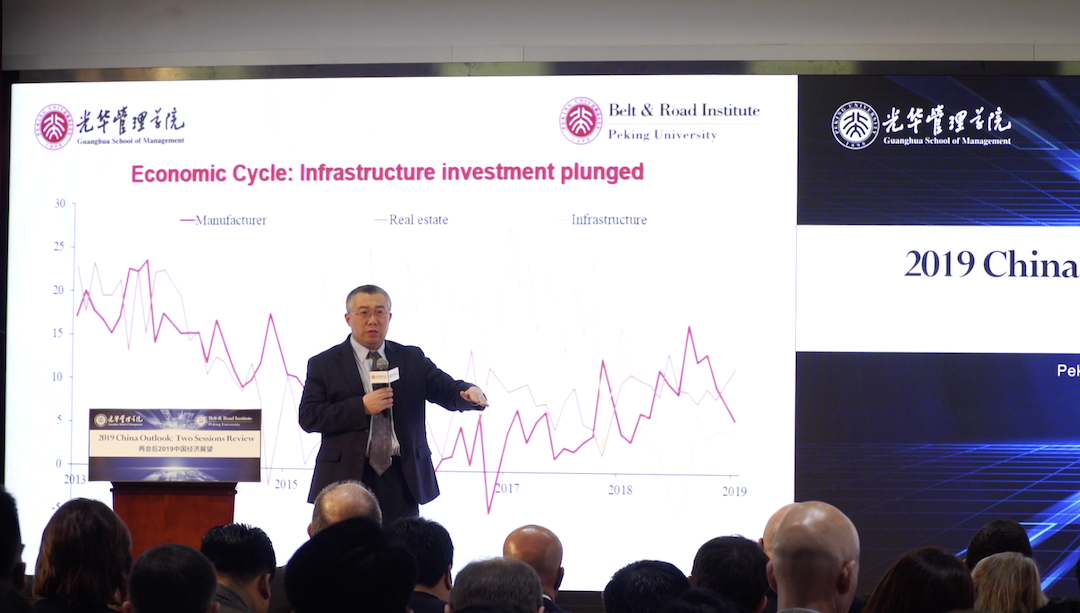 In a speech entitled "The Chinese Economy: A Policy-driven Medium-term Boom", Yan Se, associate professor of Economics of Guanghua, analyzed the logic of China’s economy from three cycles, namely, the economic cycle, the financial cycle and the policy cycle, and stressed the policy cycle as the main driver of the economy. China’s economic slowdown since 2018 is to some extent due to policies, such as financial de-leveraging and lowering the growth rate of infrastructure investment.

To fulfill the goal of fully establishing a moderately prosperous society by 2020, maintaining steady growth is the most significant task for China's economy in 2019. The signals of policy expansion — a substantial tax cut and supportive monetary policy — are taking effect. Professor Yan estimated that driven by policy, China's economy is expected to enter a medium-term boom that will last for one to two years. 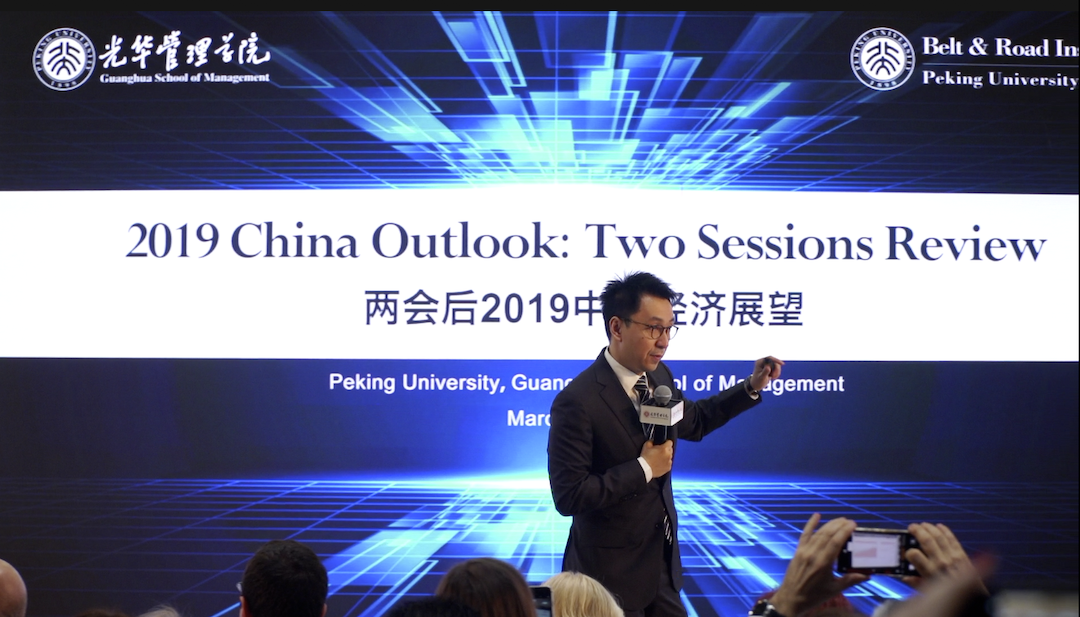 Zhang Ying, associate dean of Guanghua, focused on the digitalization of the Chinese economy with the purpose of leading a new round of economic restructuring and industrial upgrading.

After the rapid development of the past four decades, the dividends of the Chinese economy have been decreasing. Where is the new dividend? He believes that the new dividend of the Chinese economy comes from the division of labor in the global value chain, the continuous promotion of urbanization, and technology-driven enhancement. The problem that China's economy needs to solve urgently is how to use digital technology to lead a new round of economic restructuring and industrial upgrading, and to find new dynamism for development.

On the basis of China’s unique characteristics of adapting the technology of the internet, he said there is an insufficiency of supply. He further explained the opportunities brought by the digitalization of the supply side as the new engine to drive economic prosperity.

In the next decade, the major task is to link development of the consumer Internet with industrial upgrading and to establish an industrial network and a social information network. 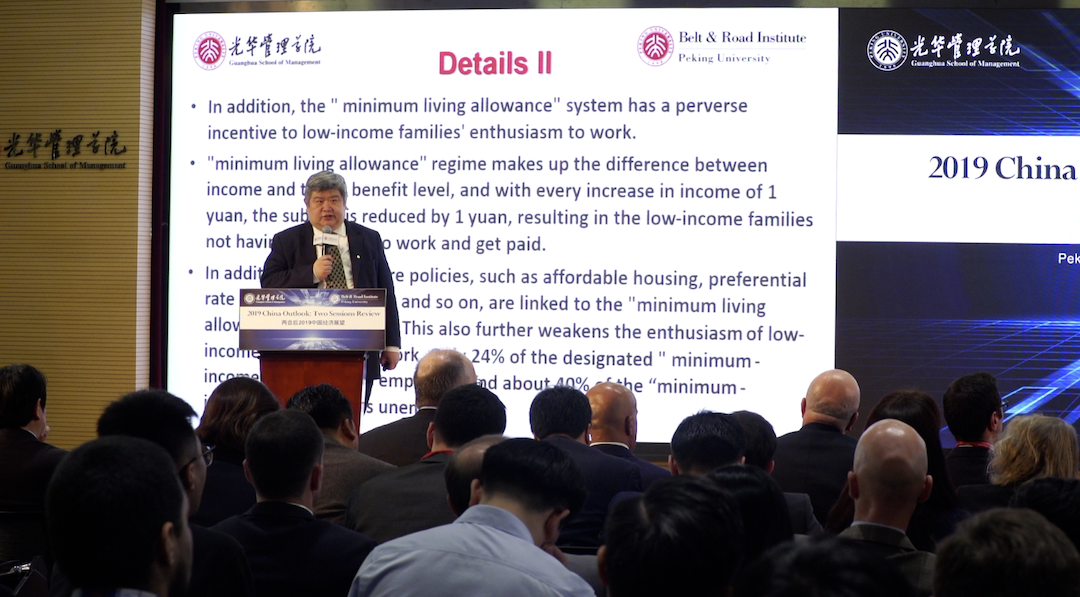 Jin Li, Associate Dean of Guanghua, shared his views on how to “stimulate consumption growth through fiscal and taxation policies.” He stressed consumption plays an increasingly important role in economic growth while China’s current consumption is left far behind.

Meanwhile, these policies require high levels of management. The Chinese government should try its best to avoid problems such as targeting errors, material manipulation, fraud, etc.