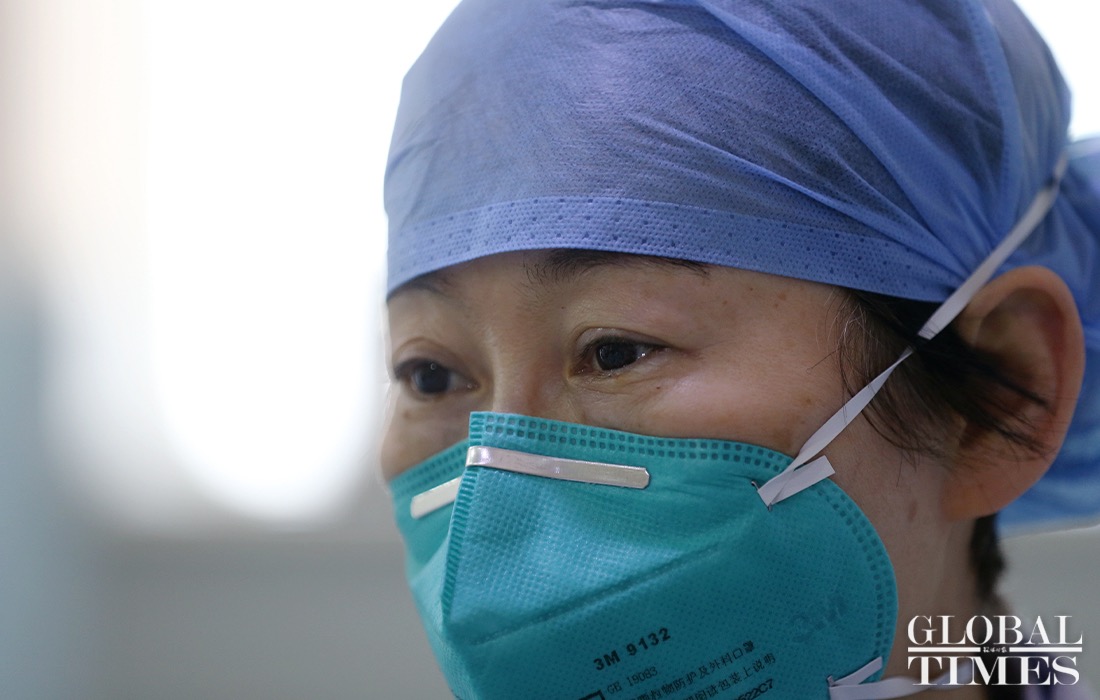 Zhang Jixian is considered the first doctor to report the novel coronavirus before its outbreak. She works as the director of respiratory and critical care medicine department of the Hubei Provincial Hospital of Integrated Chinese and Western Medicine.
The Hubei government awarded a grand merit to Zhang on February 6 for her contributions.

During a short break of treating pneumonia patients in Wuhan, Zhang told the Global Times how she found one of the first reported cases of novel coronavirus infection a little more than a month ago.

A senior couple living in the residential community near Zhang's hospital went to see her for their fever and cough on December 26, 2019. By observing their CT thorax images, Zhang found differences from pneumonia caused by common viruses.

Zhang asked the couple to have their son examined in the hospital. She found the CT image of his lung was similar to his parents.

That day, a patient from Huanan Seafood Market in Wuhan who had a fever and cough also had a similar CT image of the lung.

The seafood market in Wuhan has been widely considered the source of the novel coronavirus outbreak, which initially hit Wuhan and then spread across China.

"Usually, a family comes to the hospital and there is little chance for all the family members to have the same disease except for infectious diseases," said Zhang who gave the couple's family and the patient from the seafood market tests denying the possibility of flu.

Xia Wenguang, a dean of the hospital, called 10 experts from different departments, including respiratory, cardiovascular, ICU and infection, to discuss symptoms of the seven patients. They concluded the situation was unusual and deserved special attention.

After learning there are two similar patients in two other hospitals in Wuhan and their addresses are located in the seafood market, Xia decided to report the situation to the provincial center for disease control and prevention. The center then started epidemiology research in the hospital.

Zhang said she thought the situation was urgent. She and her hospital pushed their local authorities to take action.

"Us doctors have a different understanding of 'urgent.' It's as if we must immediately implement a doctor's advice. We cannot wait for more than one or two hours. But to others, taking action after one or two hours may be considered as 'quick,'" Zhang told the Global Times.

After admitting the old couple and their son into the hospital, Zhang divided an area in the ward to make a quarantine area with nine beds.

Zhang's hospital is one of those located nearest to the Huanan Seafood Market and she later received many patients with similar symptoms to the first seven patients.

"Wearing more may give us more protection," Zhang said.

These canvas uniforms were finally replaced by professional protective suits after Zhong Nanshan, a renowned respiratory scientist in China, told the public on January 22 the novel coronavirus could have people-to-people transmission.

Thanks to Zhang's precaution, even though the hospital received an increasing number of novel coronavirus patients, no medical staff in Zhang's department had been infected.

Zhang said that her strong protection awareness came from her experience of fighting against SARS in 2003 - she was one member of the expert team which went to residential communities every day to check suspected cases.

"From that time, I have a better understanding of what is public health emergency," Zhang said.

She noted that doctors need to learn about the patients' occupations and addresses. Four patients came from one seafood market and had similar symptoms. "How can there be no problem in such situation? This is the thinking pattern I had got from fighting against SARS."

After the outbreak of the novel coronavirus, Zhang and her colleagues devoted themselves to fighting against the disease. She has cried sometimes after busy days.

"There are too many patients and the medical care personnel are worn out. I almost shed the most tears in my life during these days," she said.

She said they never saw the novel coronavirus before and they never saw so many patients swarming into the hospitals. She cried when the disease claimed the lives of some patients, when protective suits were running low, and when there were no face masks.

But after crying, she would go back to her patients and work. Zhang noted that the struggle against the coronavirus is important and there is much work that needs to be done as soon as possible.

"To change the current situation, we need to give treatment to patients who have mild symptoms and separate them from the severe cases. Receiving severe patients and offering better medical treatment to them could help decrease the fatality rate. If the fatality rate is too high, it may cause panic in the public - people may think they will die once they get infected with the disease. The patients would also be in panic and go for different doctors, which makes them mobile virus carriers and likely to spread the virus more quickly and widely," Zhang said.

Zhang said she thought it is important to give people confidence. "For mild patients, we need to receive them and offer treatment in case they panic. This is what we must do urgently," Zhang said.