Masked rioters went on a destructive rampage across Kowloon in Hong Kong on Sunday, zeroing in on police officers and stores with mainland links with wanton criminality and a range of weapons. 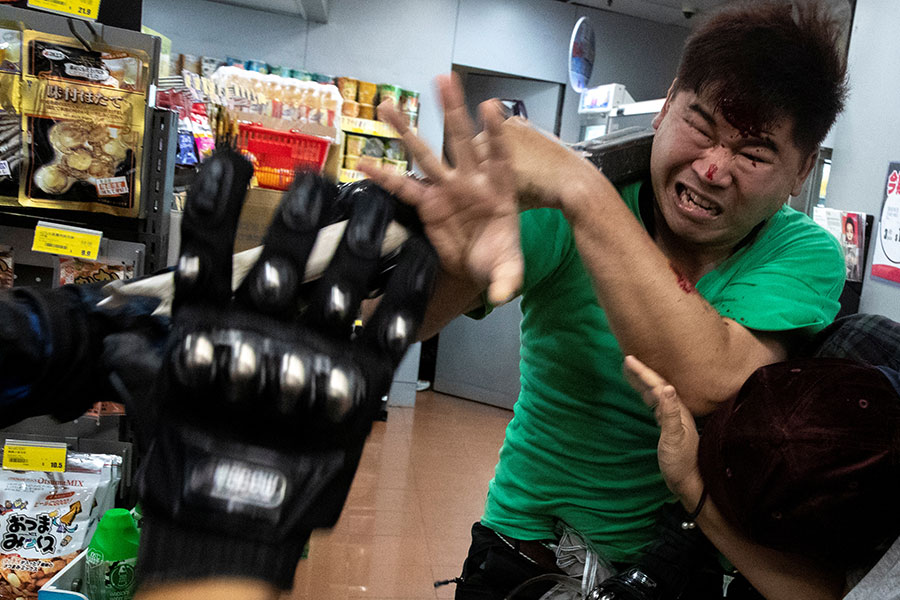 It was the 20th straight weekend of social unrest in Hong Kong.

A video recording showed a black-clad, masked person throwing a petrol bomb from a flyover in Prince Edward into a group of police officers below. A police officer was enveloped in flames but the fire was quickly extinguished.

At least two police stations in Kowloon－in Tsim Sha Tsui and Sham Shui Po－came under severe attack on Sunday afternoon. Mobs hurled over a dozen petrol bombs at the stations.

Around 6:30 pm, police deployed a remote-controlled bomb-disposal robot to detonate a paper box that was suspected of containing explosives. The box, with electric cables fastened around it, was placed on the road one block from the Sham Shui Po police station.

Before detonating the box, the police seized 42 petrol bombs and raw materials for creating paintballs from two vehicles in Tai Po. They did not rule out the possibility they were being prepared for use in the anti-government protests across Kowloon. Two men, age 31 and 34, were arrested at the scene, the police said.

Mobs pried open the shutter of Bank of China's Jordan branch and smashed counters. ATMs installed inside were trashed and burned.

The glass windows of a Chung Hwa Book Company bookstore were smashed. The flagship store of Xiaomi－a mainland electronics company－in Mong Kok, which was vandalized by rioters on Oct 4, was seriously damaged again. Rioters pried its shutters open.

An illegal procession on Sunday had West Kowloon Station as its destination. Thirty trains to and from the station were canceled.