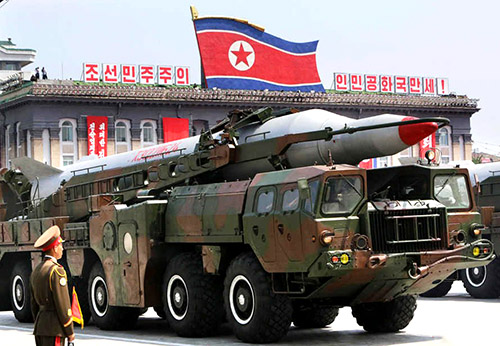 The possibilities of military clashes on the Korean Peninsula remain high as the US is trying to forge a united global political and military front to pressure North Korea, including sending its strongest planes to military drills with South Korea, Chinese experts said on Friday.South Korean President Moon Jae-in and US President Donald Trump on Thursday held their second phone talks in two days after Pyongyang's latest long-range missile test, agreeing to keep up the pressure and sanctions in hope of bringing the regime back to the negotiating table, the Yonhap News Agency reported on Friday."The two leaders agreed on the need to maintain their basic stance of putting strong sanctions and pressure on the North until North Korea voluntarily gives up developing nukes and missiles and comes out for dialogue," South Korea's presidential office Blue House said in a statement on Friday, Yonhap reported.Chinese President Xi Jinping talked with Trump on the phone on Wednesday, saying the denuclearization of the Korean Peninsula is China's unswerving goal, the Xinhua News Agency reported Wednesday.Chinese Foreign Ministry spokesman Geng Shuang told a daily press briefing on Friday that China's stance on the North Korea nuclear issue is clear and has maintained communication with the US."China and the US share a common stance on promoting the denuclearization of the Korean Peninsula. China hopes the US and the international community could make joint efforts to solve the issue by negotiation," he said. "The US is trying to forge a political and military united front line against North Korea including having military drills with South Korea and calling on more countries to pressure North Korea," Song Zhongping, a TV commentator and military expert, told the Global Times on Friday.Song said that the US may regard military clashes as the only way to force North Korea to give up developing nuclear weapons and it is rehearsing fast-moving tactics with its allies in case there is a war on the Korean Peninsula.The US and South Korea will stage a joint air force drill, Vigilant Ace, from December 4 to 8, involving about 230 planes and 12,000 US personnel. The US plans to send six F-22 Raptor stealth fighter jets to take part in the drill. B-1B strategic bombers and three or four F-35A jets will also likely join in, Yonhap reported. "The US is practicing accurate targeting capability against North Korea. B1-B strategic bombers will target any object from outside the defense area. An F-22 jet group would destroy a core target quickly, whether damaging missile bases or decapitating core leaders," Song said.The US also asked the UN Security Council to call on all nations to cut all ties with North Korea, sever diplomatic relations, enforce UN sanctions and limit military, scientific, technical or commercial cooperation, US Ambassador to the UN Nikki Haley said during an urgent meeting of the Security Council, Euro News reported Wednesday.Lü Chao, a research fellow at the Liaoning Academy of Social Sciences, told the Global Times on Friday that the vicious circle on the Korean Peninsula has escalated as the US and its allies impose greater pressure on North Korea while the latter keeps on conducting missile tests, which heightens the possibility of military clashes. "The US and South Korea have set a bottom line for North Korea's nuclear missile tests - not having practical combat capability. But according to the current situation, it is just about time for North Korea to break through that line as it will not give up the ongoing tests," Lü said, adding that the Hwasong-15 has outperformed the Hwasong-14 in some areas such as launch height and distance.Lee Eugene, a spokeswoman for South Korea's Ministry of Unification, told a press briefing on Friday that "the government does not think that North Korea's latest test demonstrated full capability for an ICBM [intercontinental ballistic missile] including the reentry technology and a precision guidance system. Seoul does not view the North as crossing the red line."Before North Korea crosses the red line, the international community "still has time to solve the issue by diplomatic and peaceful means," said Lü, adding that "the US and its allies should seriously consider China and Russia's proposal for a double suspension.