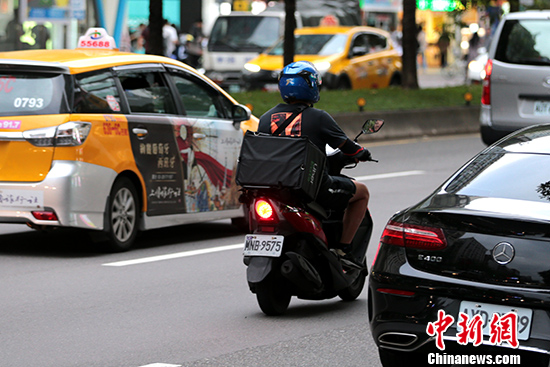 A food delivery driver rides a motorbike in Taipei, on Oct 15, 2019. (Photo: Chinanews.com)

TAIPEI -- Despite their generous salaries, Taiwan's food delivery drivers are urged to pay more attention to their insurance, said the online recruitment platform 104 Job Bank in the wake of recent traffic accidents.

Several recent accidents involving delivery drivers, however, have highlighted their lack of insurance, as most are employed as contractors, the company noted.

It found that nearly 70 percent of the respondents do deliveries as a full-time job despite it being widely perceived as a part-time option.

Chung Wen-hsiung, deputy general manager of 104 Job Bank, noted these people should be aware of the lack of benefits and insurance in the job since contractor drivers are not fully protected by labor laws.

There are currently 80,000 delivery drivers employed by seven food delivery companies in Taiwan, and three out of those seven firms consider their drivers "outside contractors," according to Taiwan's labor authority.

Two delivery drivers, aged 29 and 20, died on the job in two separate road accidents on Oct 10 and 13 in Taiwan, triggering a government inspection into the work environment in the food delivery sector, according to local media reports.