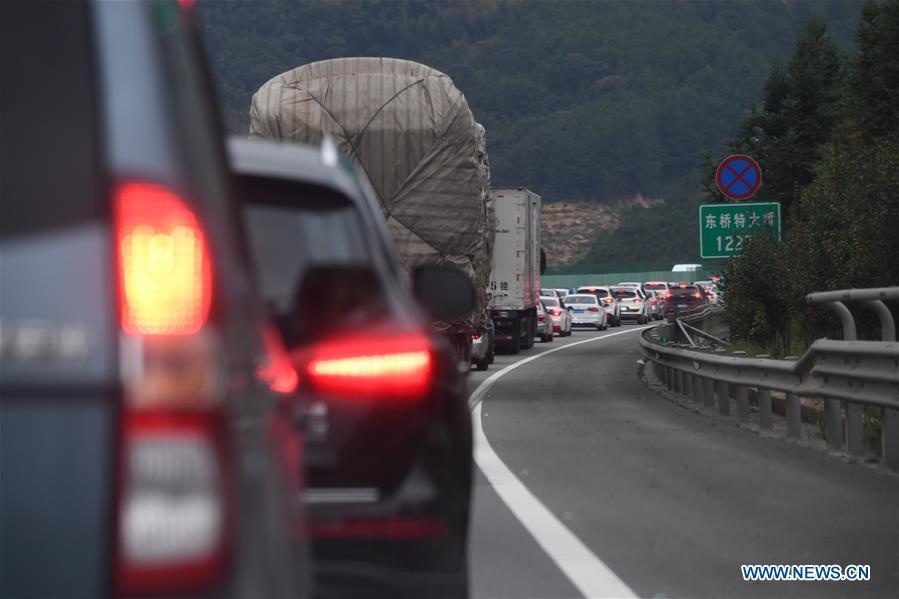 Photo taken on Oct 6, 2020 shows a traffic jam on an expressway near Fuzhou, Southeast China's Fujian province. Many places in Fujian witness travel rushes as the National Day and Mid-Autumn Festival holiday draws to an end. (Photo: Xinhua)

Traffic management departments around China have been ordered to intensify road safety efforts, including increasing inspections of traffic violations and taking emergency measures in bad weather, during the last two days of the National Day and Mid-Autumn Festival holiday.

The Ministry of Public Security's Traffic Control Bureau gave the orders during a video conference on Tuesday, demanding that local authorities learn a lesson from a spate of traffic accidents in the past few days.

On Sunday morning, a traffic accident killed 18 people and injured another person on the 514 provincial highway near Fuyu, Jilin province. A small truck hit the back of a tractor on the highway around 5:40 am and then slid into the oncoming lane, crashing into another small truck, a preliminary investigation by local police found.

The cause of the accident is being investigated.

As a working group led by Liu Zhao, vice-minister of public security, was dispatched to the scene on Sunday afternoon to help the investigation, another traffic accident caused two deaths and one injury in Tieling in neighboring Liaoning province, the Shanghai Observer, an online news portal, reported.

Early on Monday morning, a truck ran into a farmers' market in Dingxi, Gansu province, killing six people and injuring 14 others, the report said, adding the spate of accidents in the space of two days had sounded a travel safety alarm for the remainder of the eight-day holiday.

The ministry said on Sunday that it had dispatched 10 supervision teams to key regions and traffic routes across the country to help local traffic control departments strengthen road safety inspections and boost crackdowns on traffic violations in rural areas.

"Meanwhile, we'll lead the agencies to keep traffic in order and increase investigations targeting illegal vehicles as well as guide local people to enhance their awareness of traffic safety," it said.

Given that steady rain was predicted for many places in the south and west of the country during the last few days of the holiday, the ministry said on Tuesday that it had offered aid to local traffic control departments to improve their emergency measures in adverse weather conditions.

It urged returning travelers to plan routes and schedules in advance and avoid driving in the rain or after drinking alcohol.

Statistic from the ministry showed a 2.5 percent increase in traffic flows around the country from 2 pm on Monday to 2 pm on Tuesday, compared with the previous 24 hours.

It added that no large-scale congestion was reported on highways around the nation from Monday afternoon to Wednesday, and it had not received any reports of traffic accidents during that time killing five or more people.