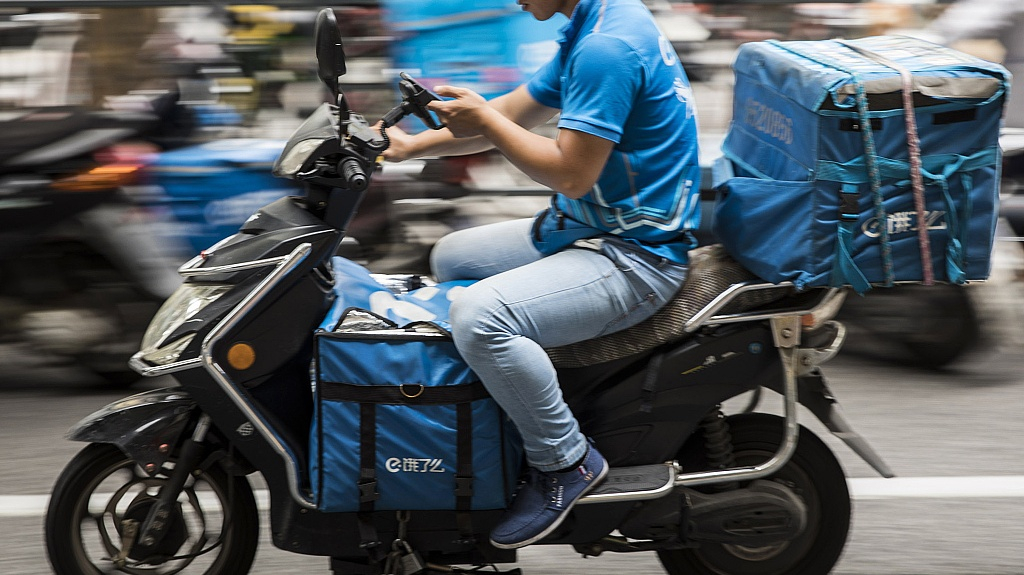 Chang He used to always be on the run. As a deliveryman for China's leading food delivery platform, the uniformed 39-year-old would be seen rushing on his electric scooter with his signature helmet crisscrossing sidewalks.

Chang had to hurry because if he was late, half of his commission would be cut. His average commission for one order was between three and 10 yuan. Late deliveries were also liable to incur negative reviews from customers and push down his rating on the platform, leading to a reduced bonus in the longer term.

By the end of 2018, there were at least three million food deliverymen in China, according to figures from leading food delivery platforms Meituan Dianping and Ele.me. Around half of them are under the age of 30. Though their earnings may rival that of an office worker, the fast pace demands and minimum protection may sometimes put them at risk.

The boom in China's food delivery industry stems from its population's incessant pursuit of speed. Due to busy work schedules, many white-collar employees order delivery for lunch and dinner, and those who work for extra hours at night order meals as an energy booster.

Depending on the distance, deliverymen are usually given 30 minutes to one hour to deliver meals – that includes the time to fetch the meal from a restaurant, ride on a scooter, go to the customer's place, tap on the door and deliver the food.

But that time is hardly enough, said Chang He. Many office buildings prohibit delivery men from entering and require registration at the security office. Some bar them from using passenger elevators forcing the deliverymen to wait for one of the few cargo elevators to go to higher floors.

To make sure customers know the whereabouts of their food, the delivery platform will track the location of the deliverymen by the GPS-enabled app, sending customer updates every few minutes on the order's status.

But transparency is not required on both sides. It is not rare to see customers, after placing an order, become out of reach. In Meituan Dianping's deliverymen's social media group, many complained that customers turn off their phone, go to a place with no signal or simply turn down calls when the deliveries arrive. The most difficult situation is when customers leave the wrong address and lose contact, guaranteeing late delivery.

Behind the food deliverymen's heavy workload and busy schedule is the intense battle between the two leading delivery platforms, Meituan Dianping and Ele.me, to capture the market.

In what was dubbed a "cash-burn battle," the two platforms rolled out numerous special offers to consumers, merchants and delivery partners – 50 percent off, free delivery and special discounts for cakes and dietary products, one offer against another competing on the platform in an escalating turf war.

Fei Ge, 25, from the city of Zhengzhou, the capital of Henan Province, became a deliveryman at the height of the sales battle that played out in the city in 2018, when a third rival company, Didi, was about to enter the industry. He described his hectic life as one of immense psychological pressure because the orders came nonstop.

"Many times, after I picked up the food from the restaurant and was on my way to deliver, another order came that asked for food from the same restaurant. While I was stuck there undecided if I should head back or keep on delivering, the third order came," Fei said in an interview with CGTN Digital.

The platform does not allow deliverymen to turn down orders during peak hours, normally between 11:00 am and 2:00 pm, Fei said.

Complaints are rife about reductions in commission for deliverymen. Fei recalled that last summer, his average commission per order was three yuan (0.45 US dollars) while on average he can take 30 to 80 orders every day. On social media, some deliverymen argued that the commission dropped continuously in one year, squeezing their earnings.

But apart from commissions, deliverymen are also entitled to various forms of incentive payments, such as for working during peak hours, in the rain and in hot weather. Fei said the intense battle to win the market may also be a blessing in disguise: "The more people place orders, the more we earn."

Who will pay the medical bill?

Neither Chang nor Fei worked for long in the food delivery industry. Fei worked for four months and Chang a short-lived two months. After surviving a second traffic accident in two months, Chang decided to quit.

The accident happened when he was on his electric scooter trying to enter a gated community. A large vehicle was coming towards him while he was checking the delivery app. After noticing the approaching vehicle, he immediately jumped sideways to avoid a crash, ending up with bruised legs and a broken scooter.

When asked if the company bought insurance for them, Chang said he was not certain. Most food deliverymen in China are hired not by the delivery companies but by third-party contractors.

Increasingly, more freelance deliverymen who work on a part-time basis have joined the industry on a crowd-sourced model. They work under no formal contract, under no fixed schedule, and also with no basic salary. A two-yuan-fee will be deducted from their payment for insurance on days that they decide to take orders.

The surge in road accidents related to food deliveries has prompted police to take action. After it was reported that 117 accidents that involved injuries and deaths related to food deliveries took place in Shanghai in 2017, police called in the companies to warn them over traffic safety. In the Pudong district of Shanghai, the police launched an experimental model that put frequent traffic rule violators on a blacklist, prohibiting them from delivering for platforms.

Though Fei had a monthly salary of 5,000 yuan (744 US dollars), a decent amount considering the average monthly salary in the city is around 6,700 yuan (997 US dollars), he said there is no turning back. He is now employed as an office worker at a trading company.

"The life of a deliveryman is too hard and risky," he concluded.