CHINA Roar emotion as Wuhan fans return to the stands

Roar emotion as Wuhan fans return to the stands 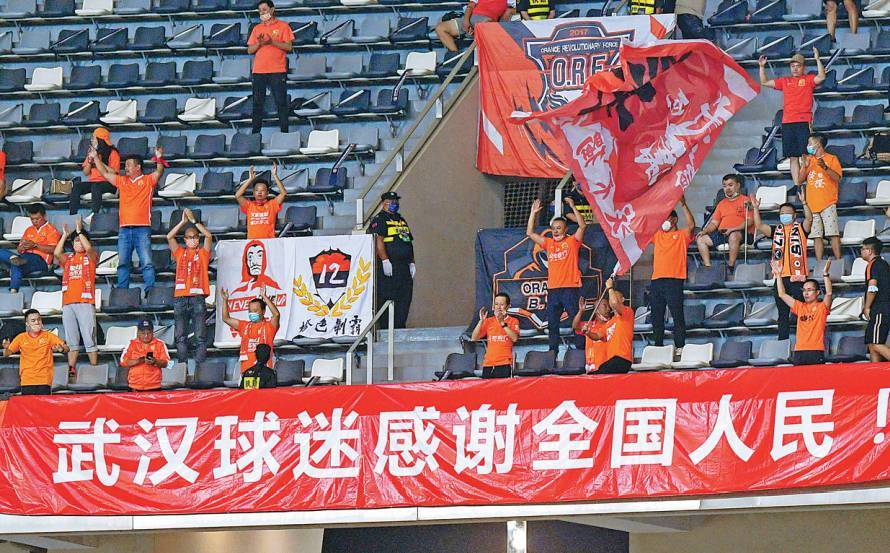 Fans of Chinese Super League club Wuhan Zall roar on their team during Sunday's 2-2 draw with Beijing Guo'an. The banner reads:"Wuhan fans thank the people from around the nation." (Photo: XINHUA)

The cheers and tears told the story of just how much a return to the stands meant for fans of Wuhan Zall on Sunday.

After a 280-day hiatus, a select group of 300 Zall supporters attended their first Chinese Super League match since Wuhan emerged as the epicenter of the country's coronavirus outbreak. A come-from-behind 2-2 draw against Beijing Guo'an capped an emotional evening for Zall fans at Suzhou Olympic Sports Center.

"When the CSL called to inform us the Wuhan fans could come, we were all just thrilled. The last time we appeared in the stands was last December," Wu Si, the club's fan liaison director, told China Daily.

"The match was on Sunday and people need to work on Monday. Also we needed people to take a nucleic acid test, so we thought not many people could come as it was too problematic. But all of our fans were so enthusiastic and most wanted to come."

However, getting the green light to enter the stadium was not so straightforward. As part of the CSL's strict virus-control measures, fans needed a negative nucleic acid test result for COVID-19 within seven days of the game, as well as checks on their body temperature and health QR codes, which show their 14-day travel history.

"The CSL helped us through the process so our fans want to thank them," Wu said. "The second we entered the stadium, we got the same old feeling back. Throughout the match we did not stop cheering. We wished to give our players a home-team atmosphere. That was a release of passion that could be seen by all the players and TV audiences."

The CSL's delayed 2020 season kicked off in late July behind closed doors after a long postponement due to the COVID-19 pandemic. The 16 teams are split into two groups in the host cities of Suzhou, Jiangsu province, and Dalian, Liaoning province, where players are under strict lockdown with no interaction allowed with the outside world.

With the epidemic now under control in China, the CSL has begun to allow limited number of spectators to attend games, beginning with Shanghai SIPG's 2-1 victory over Guo'an on Aug 22 when about 2,000 seats were made available for fans and medical workers who fought on the frontline against the coronavirus.

Those tough times are still fresh in the memory for Wuhan fans, who on Sunday thanked their Guo'an rivals for making donations to the COVID-19 fight with gifts, including an array of local Hubei province snacks. Banners inside the stadium also showed their gratitude to Jiangsu province's medical workers who worked on the frontline of the crisis in Wuhan.

"When the outbreak started, the Guo'an fan group contacted us asking if they can do anything to help the people in Wuhan," said Wu. "We were so touched and I think that even went beyond the spirit of sports. Then, the Beijing fans started to wear shirts with the slogan 'Stay Strong Wuhan' to cheer us, which gave us confidence back at that time.

"We remember all of these things. So we hope the gifts express our thanks to Beijing fans. I hope in the future we can maintain this good atmosphere."

Soccer's shutdown by the pandemic had been tough on all CSL clubs, but especially so for Zall.

Stuck in Spain since January due to the lockdown of Wuhan, the team finally touched down on Chinese soil again on March 16. During their 44-day training stint in Spain, players and coaches were burdened by worries about the health of family and friends back home.

Now, after enduring medical quarantines and an elongated pre-season period, Zall have made a fine start to the campaign with five wins from nine games. Sunday's 2-2 draw leaves it third in Group B behind Guo'an and leader SIPG.

It looked like Zall fans might leave the stadium in disappointment after Guo'an led 2-0 at the interval. However, a spirited second-half comeback earned Zall a point, and Wuhan striker Dong Xuesheng was in no doubt the noise from the stands played a part.

"The deafening sound of the fans cheering encouraged us a lot. As a new member of this team, I can feel the cohesion and the spirit of not giving up easily for our team," said Dong.

"I felt steeled by this atmosphere. I hope we can repay our fans with better performances in the future."