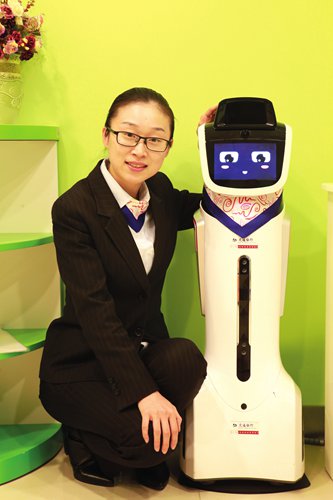 Robot Jiaojiao takes a picture with a staff member at the Lincui Lu sub-branch of the Bank of Communications. Photo: Li Hao/GT

For many, the experience of queuing up in a bank waiting for service is anything but entertaining. But that is no longer the case for Mrs Liu, a Beijing local in her 50s, as she has recently picked up a new interest when she goes to the bank in her community on Lincui Lu, Chaoyang district - chatting with a little robot named Jiaojiao."I have never talked to a robot before. It is so much cuter and more intelligent than I expected," laughed Liu, after being told how to apply for a credit card and asked for a hug by the robot. The one-meter tall robot, Jiaojiao, has been working as a lobby manager assistant at a local branch of Bank of Communications for months. Her daily work is to greet guests and offer inquiry services and customer guidance. With a child-like voice and a unique sense of humor, it has won many customers' hearts.Jiaojiao is the first robot introduced by Chinese banks, followed by a series of other robots since 2015. As AI technology penetrates every aspect of the finance sector, robots have become a new force in the service team and now, almost every big bank in China has its own robot team member, such as "Ying Ying" for Bank of China, "Xiao Long Ren" (Little Dragon Man) for China Construction Bank and "One" and "Xiao Min" for China Minsheng Bank. As technology advances and the robots' systems and "intelligence" upgrade, the robots are bringing more fun and efficiency to the public. 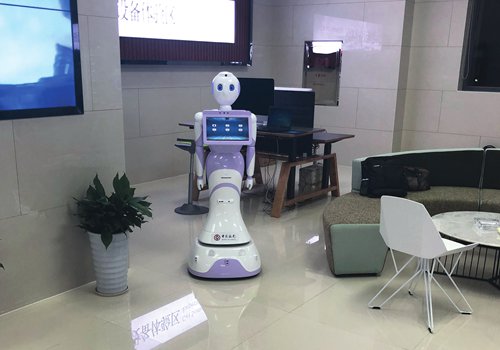 Having fun at the bank "Hi, I want to have a pancake. Can you help?""Wow, you got me. I have never had any food before. All I have is electricity; would you like me to share some?" A burst of laughter fills the room. Liu and another customer are playing with the robot while they wait in the lobby. Talking with Jiaojiao, Liu feels the time she spends at the bank is full of fun. "The robot helps relieve pressure and anxiety for customers while they wait, especially when the queue is long," said Yang Meng, vice manager of the Lincui Lu sub-branch of the Bank of Communications. Rather than turning to consultant services, people are more interested in chatting and playing with the robot, Yang said. Sometimes Jiaojiao will also move to the waiting area to entertain others when there are many people there. Apart from talking, the robot can also sing and perform some dance moves. Meanwhile, Jiaojiao also adds fun and pleasure to the staff's working routine. The robot will move to the recharging area automatically at noon and after getting off work. Those are the times when it often acts like a spoiled child. "Hi, beautiful sister, I walk too slowly; would you please carry me over there?" "Hi sister, I am too tired; would you please hug me?" These are some sentences it often says to the staff on the way to the charging spot, and it is hard to say no to its cute requests, said Yang. Invisible robots improves efficiencyIn fact, the "robot bank force" is not only at reception, it also works behind different platforms such as WeChat, apps, web-pages and phone calls. "The software is more or less the same, but they are at different ports. For example, when you are calling customer service, you are likely talking to an AI program or an AI robot," said Guo Hongguang, CTO of  Internet marketing department of China M-World, a high-tech company that develops bank robots. He said invisible robots have greatly improved bank efficiency over the years, even without the customers' awareness. His opinion echoes the example of "Gong Xiao Zhi," the invisible customer service robot of Industrial and Commercial Bank of China (ICBC). According to ICBC's press release, the online robot offers more than 570,000 services on average per day through 15 different channels, including phone message, the mobile banking app and WeChat bank, which greatly boosts the efficiency of finance services. Since its launch in 2016, Gong Xiao Zhi has served customers more than 170 million times. To further gain customers' favor, the bank also embodies the robot with a red and white mascot-like image. "In fact, the invisible robots, or programs, bring higher efficiency with a lower cost compared to physical robots," said Wang Feng (pseudonym), a senior industry professional at a large bank in China. "A physical robot costs around 100,000 yuan ($15,540) to 200,000 yuan, but the real benefit it creates for the store is unclear so far," he said. Disputes on physical robots Wang also points out the current technological difficulty for physical robots in terms of hearing people's voices."It's hard to pick up one particular voice very quickly and precisely, especially in a noisy place like a bank lobby. That's the biggest challenge for many physical bank robots at the moment," said Wang. And the considerable cost for further maintenance also puts a physical robot at a disadvantaged position in the market. "The relevant technology is not that mature yet," Wang said. He believes "abstract robots," AI programs attached to digital devices, will work better in the long run. He thinks "digital banks" will be the future, replacing physical stores and creating more individualized financial services based on a personal data pool. Meanwhile, there are also disputes online as to how intelligent a bank robot really is, with many wondering if there is a human staff member operating in the background to ensure the robot's performance. The related questions and posts can be commonly seen on zhihu.com, a popular Quora-like platform. Regarding the issue, Wang confirmed that certain "manual intervention" is applied at times to boost the robots' intelligence, especially on big occasions like an exhibition. Irresistible future trend However, the public still holds a high expectation on bank robots and banks are working hard to enhance the integration of AI technology with their finance services. A new wave of technological development and product upgrading is in progress. Earlier this month, Bank of China launched its first e-finance specification branch in Hunan Province, with a series of cutting-edge high-tech equipment being introduced to the public for the first time, including a robot, according to a xinhuanet.com report. "It is an irresistible trend, and I have strong faith in physical bank robots. I don't think physical stores will be replaced, but 'unmanned banks' where only robots and machines serve the customers will appear in the near future, say in 5 to 10 years," said Guo. He analyzes that people's habits for receiving service will not change dramatically and direct and in-person service will still be in demand despite digital service developments and that is why physical, human-like robots matter. He indicates that the relevant industry is developing quickly and the key hindrance for the robots' popularization lies in banks themselves, rather than technology. "It depends on how much determination they put on self-revolution. It takes money and time," said Guo. Both Wang and Guo believe that a change in the workforce structure within banks and the finance structure as a whole will surely come soon. "Robots will take over many jobs that are traditionally done by people, but the new mode of service will create new jobs in other fields like IT and machine maintenance positions. Overall employment won't shrink," said Wang.