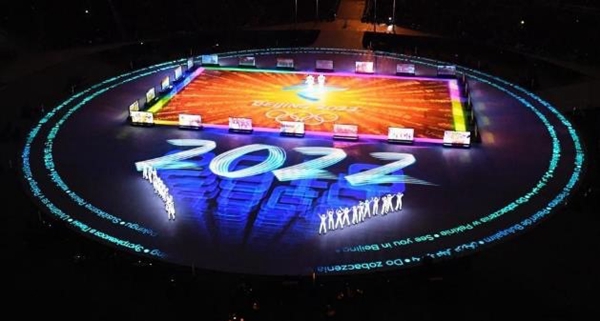 The Beijing eight-minute show at the closing ceremony of the 2018 PyeongChang Winter Olympics. (Photo: People's Daily)

The eight-minute show presented by China at the closing ceremony of the 2018 PyeongChang Winter Olympics conveyed greetings from the 2022 hosts to the world in a high-tech way. The eight-minute show wowed the world without any doubt. What impressed them most was the artificial intelligence (AI) technology used.

With dazzling lights, a group of 24 mobile robots "danced" to music with another 24 roller skating actors on the giant stage to showcase the charm of icing sports and Chinese culture. The show, a perfect fusion of high-tech, culture and arts, is the world's first live performances involving such a large-scale mobile robot team and so many human dancers.

What lies behind the 8-minute show is how China’s robot industry makes the impossible possible in the past two decades.

A performance with human dancers involved is not only technology, but also complicated elements including body design, gear friction, multi-sensor fusion and human-machine integration, a source from SIASUN Robot and Automation Company, a high-tech company who developed the robots, the vice president of SIASUN's mobile robot Department Bian Guishi said.

The requirements for performing robots are different from those for industrial robots as the former is expected to perform a variety of complicated moves and be in line with the performers, lights and music, Bian said, adding that human-machine integration is also a challenge confronting the industry.

In a bid to ensure a successful outdoor performance even in bad weather like low temperatures and gale, the Beijing team tested all the machines in extreme conditions and made contingency plans during the rehearsal, he said, adding that the rehearsal field in Beijing was also built in the same size with the stage in Olympic Stadium of PyeongChang. 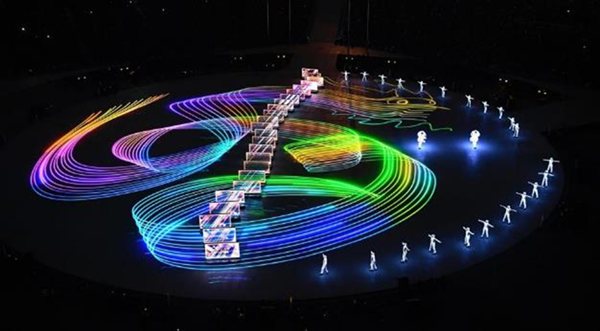 The Beijing eight-minute show at the closing ceremony of the 2018 PyeongChang Winter Olympics. (Photo: People's Daily)

Another challenge was how to translate the creative artistic ideas from the show directors into data that can be accepted by the machines, said Yu Huan, president of an institute on research of mobile robots under SIASUN, adding that the design team sometimes had to work for a whole night only to meet the requirement for adjusting one move.

Repeated calculations, programming and adjustments were made to ensure the robot performers move fast, accurately and adeptly without hitches, according to Yu, explaining that the precision can reach millimeter or millisecond level.

The design team also upgraded the communication system of the robots to make sure that they could receive instructions against jamming, Yu said, adding that those robots are capable of working in a temperature below minus 30 degrees Celsius.

A millimeter-scale accuracy was applied by the “ice screen” worn by the robot dancers, each three meters in length, and all the LED screens are able to stand with an airflow velocity below 15 meters per second.

All the dancers were dressed in advanced graphene costumes that could help them withstand coldness. Graphene, a new type of nanometer material, is dubbed as the “king of new materials” for its extraordinary performance in thermal conductivity.

Previous shows presented by China on the world stage mainly focused on its civilization and culture, but the PyeongChang show offers the globe a window to understand a modern China and the future relationship between machines and human beings by blending high-tech with culture in a perfect way, said an artist from the Beijing Organizing Committee of the 2022 Games.