Rooms found for travelers from Hubei 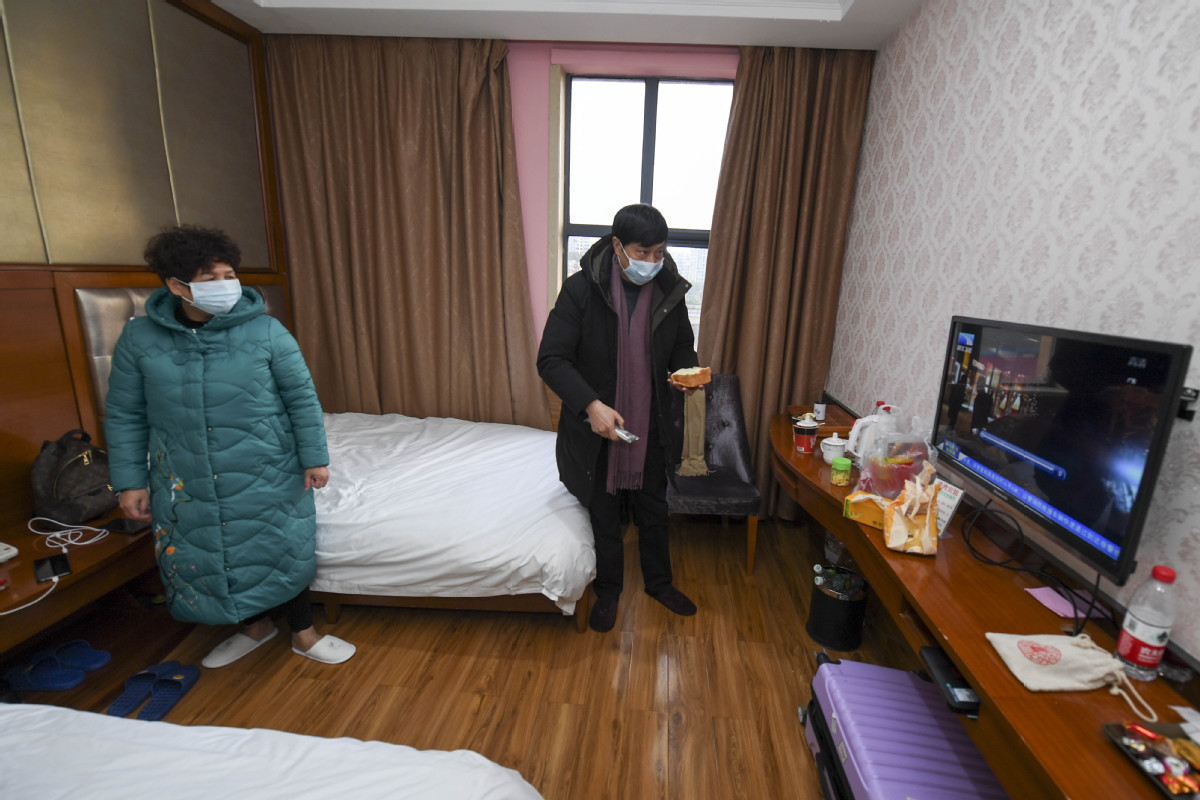 A couple from Wuhan, Hubei province, the epicenter of the novel coronavirus outbreak, watch TV news in a hotel room in Changsha, Hunan province, on Tuesday. Changsha and other cities are offering accommodations for visitors from Hubei at designated hotels for medical observation and isolation. [Photo/China News Service]

Designated accommodations are in place nationwide for travelers from Hubei province who are unable to return home due to the virtual lockdown of the province, the epicenter of a pneumonia outbreak caused by a novel coronavirus.

Wuhan, Hubei's capital and the most seriously hit city, was locked down on Jan 23 to control the spread of the new coronavirus. Nearly all the other cities in the province, also affected by the contagion, have been put into lockdown since then.

The bans have stopped people from leaving the province and have also prevented many people who left Hubei before the Spring Festival holiday from going home.

People from Hubei stranded around the country have faced problems finding accommodations because some hotels had concerns about receiving them due to the potential spread of the disease.

To solve the issue, local authorities nationwide arranged for designated hotels to accommodate "homeless" travelers from Hubei in the past few days, with lists of the hotels posted online.

People have to get their body temperature checked before checking in. The hotels have access to medical staff and will be disinfected regularly. Some hotels are requiring guests from Hubei to spend two weeks, the incubation period of the disease, in quarantine in their rooms.

The disease prevention and control authority in Guiyang, Guizhou province, said in a statement on Sunday that the special accommodation arrangements for travelers from Hubei aimed to effectively prevent the spread of the disease.

There had been earlier reports that Wuhan residents who had left the city before the lockdown were made to feel unwelcome in other parts of the country.

In response, Ma Guoqiang, Party chief of Wuhan, said on Tuesday he believed discrimination against Wuhan residents in other parts of the country was a "very rare phenomenon".

"I believe the extreme case is very rare. Most people are very kind to Wuhan people," he said.

He also called on Wuhan people to understand the feelings of people in other parts of the country who wanted them to be quarantined, saying they should comply with such requests.

There are also about 4,000 people from Wuhan outside the Chinese mainland who want to fly home, according to a letter issued by the tourism authority in Wuhan on Monday, which called for special arrangements to be made to help them after airlines suspended flights to Wuhan from Jan 23.

On Tuesday night, an airplane carrying 94 passengers from Hubei and boxes of masks and protective clothing took off from Osaka, Japan, and landed in Wuhan.

The Juneyao Air flight was originally scheduled to fly to Shanghai but the destination was changed to Wuhan after its application to change the route was approved.

The airline is based in Shanghai and it helped passengers who were not from Hubei reschedule their flights to Shanghai to avoid the potential spread of disease.

The flight crew volunteered to serve on the flight and wore masks when serving passengers. They have now been placed in quarantine for two weeks, the airline said.