CHINA Roses in the desert: planting an oasis between the dunes

Roses in the desert: planting an oasis between the dunes

From beautiful prairies to endless desert, from barren sandhills to lush grassland, 82-year-old Otgongerel has seen it all. To restore her hometown to its former glory, she spent her whole life planting trees, creating an oasis out of the desert.

Located in the heart of Maowusu, one of China's four vast sandy areas, Otgongerel's hometown, Wushenzhao, was a rich grassland many centuries ago. When she was a child, her grandparents told her stories of the endless grasslands, the gurgling streams and the magnificent herds covering emerald hills.

"Though the grassland's former glory was no more when I was little, my hometown was still surrounded by small pastures and fertile lands. But the environment started to deteriorate in the 1950s due to overgrazing. Ever since then, our nightmare began," said Otgongerel. 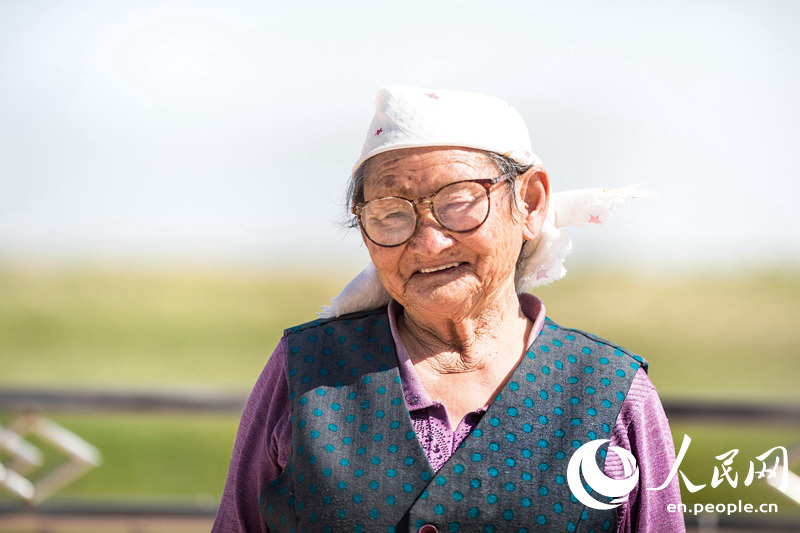 Sandstorm destroyed the last greenery in Wushinju. The once beautiful grassland was devoured by moving dunes, which accounted for 54 percent of Wushiniu's territory. A local ballad depicted the despair of Otgongerel and her people: "sandstorm turns the world into pitch black in daytime, dust and sadness eternally shroud our eyesight."

"As a mother, I don't want my children to suffer such despair. Along with people in our town, I started to plant trees in the desert," said Otgongerel.

Making an oasis in the desert was no mean feat. Without machinery and modern transportation at that time, Otgongerel and her friends had to carry saplings into the deserts by hand. Even essential equipment was hard to acquire, as each household only had one spade.

"Many people believed that planting trees in the desert was asking for the moon, but I knew the only way to survive was to bring greenery back to our home," said Otgongerel.

Decades of hard work finally paid off. The once sandstorm-stricken area is now covered by 38,600 hectares of forest. The local vegetation coverage has risen from 28 percent in the 1970s to 80 percent in 2019. 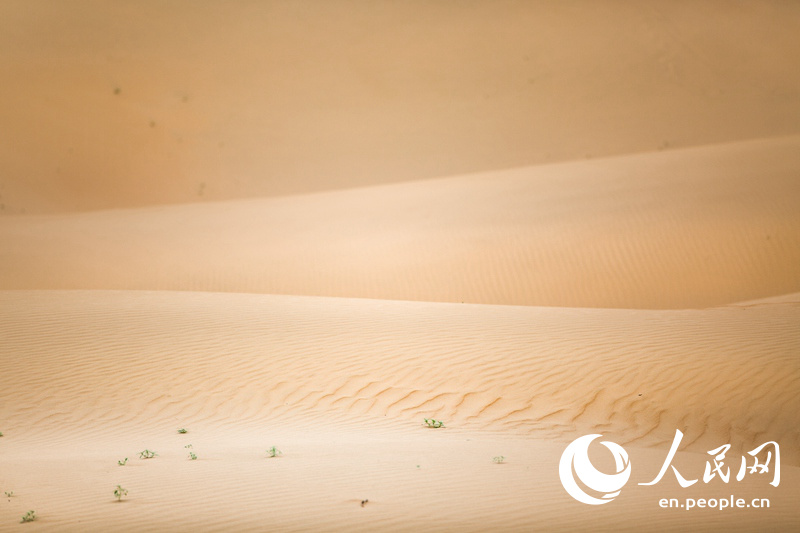 Deserts used to be the biggest nightmare of Otgonhuar. (Photo by Tanja Herko）

Otgongerel's story has inspired many, especially women. 43-year-old Otgonhuar is one of them. Following Otgongerel's path, she has become the only female leader of 288 local sand control teams, and has afforested over 2,000 hectares of the desert in a decade.

"In light of what Otgongerel started, even the striking changes made by our generation take on more of an evolutionary than a revolutionary character," said Otgonhuar.

Living in Duguitala, a small village nestled in the Kubuqi Desert, China's seventh-largest desert, Otgonhuar used to hate her hometown and the deserts surrounding it.

"When I was a kid, moving dunes would block our doorway overnight, and we had to fight our way out from the windows. Our houses were constantly buried under sand, so we had to move quite often," said Otgonhuar.

Unable to bear the thought that their beloved daughter may be stuck in the desert forever, Otgonhuar's parents saved money and sent her to a school outside of the desert, hoping she could escape the fate that had been torturing her family for generations.

"The children at my school didn't want to play with me, all calling me dirty chick from the desert. They teased me, saying that people living in the desert never wash their necks, and for this, I had a nasty fight with a boy," said Otgonhuar.

Throughout her childhood, Otgonhuar had only one purpose; to stay as far away from the desert and her hometown as possible. Her dream became a reality when she found a job as an accountant in a nearby city, but her heart was never at peace. 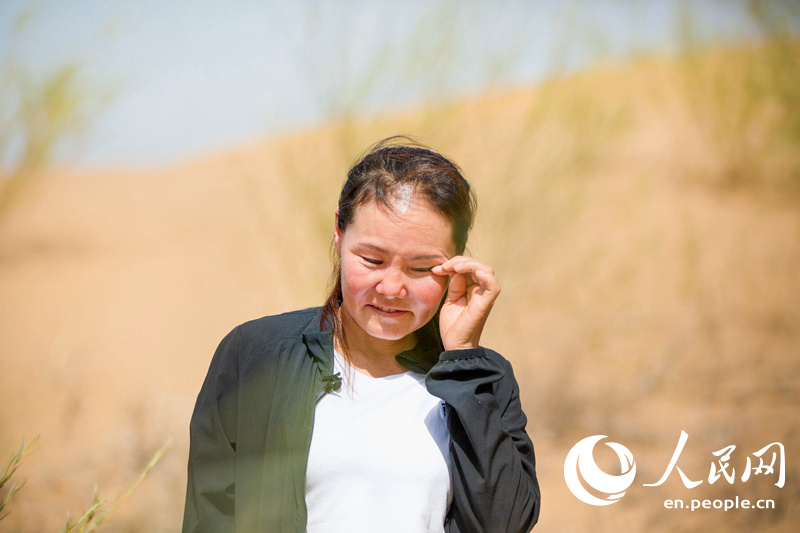 "When I thought about my family and other households still living in the desert, I felt pain. No one deserved such a horrible life, and I hoped I could do something to change the situation so that our kids would not be called dirty desert people anymore," said Otgonhuar.

While working in the city, Otgonhuar learned the story of Otgongerel. She decided to follow the path and bring greenery and wealth to her hometown, too. In 1997, when she heard the news that local authorities had decided to build a 115-kilometer road connecting the desert to the outside world, as well as plant trees to tackle desertification, she immediately quit her job and joined the cause.

"My family was appalled by the decision. My siblings called me dumb, my mother cried and lashed me with her shoes. But my mind was settled. Running away from my hometown was never the answer; I needed to change it for the better," said Otgonhuar.

Planting trees in the desert was a difficult mission. For a woman living in a rural area, it was even worse. Many people ridiculed Otgonhuar for her "hallucination," while some also confronted her, asking her to behave like "an ordinary woman," to serve her family and to find a decent job.

"People told me that planting trees was not a job for a woman. I wanted to prove to them that women are as strong as men, and we can also make our contribution to stopping the spread of desert," said Otgonhuar.

In 2007, Otgonhuar received an offer from a local company to plant trees in the Kubuqi Desert. She gathered 24 workers from poor families, which began her tree-planting business.. To gather water for the saplings, she had to trudge deep into the desert; to plant trees, she had to get up before dawn and climb dunes through sandstorms. Often, the trees she planted were buried beneath sand overnight, occasionally, the tent she lived in was shattered by strong winds. But her efforts paid off, as her first batch of trees reached a survival rate of over 85 percent. 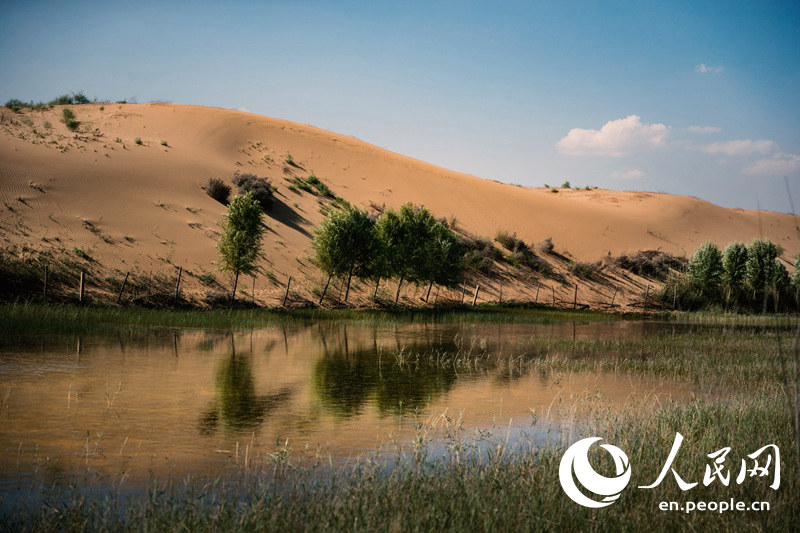 For generations, women in the deserts, like Otgongere and Otgonhuar, have made significant contributions to tackle desertification. (Photo by Tanja Herko)

Society finally accepted Otgonhuar's success. Her husband, who had originally refused to support her, decided to become her assistant, while those who once made fun of her, especially women, started to join her team. Her team is now often hired by many local companies to plant trees in the desert. Under her leadership, 25 low-income workers now earn a daily wage of around 200 RMB ($29), while she earns over 200,000 RMB per year.

"Many women, who dared not to step out of their comfort zones, were encouraged to join my team. There is nothing a man can do that a woman can't," said Otgonhuar.

For generations, women in the deserts, like Otgongere and Otgonhuar, have made significant contributions to tackle desertification. Thanks to their work, about 70 percent of Maowusu and 25 percent of the Kubuqi Desert have undergone afforestation. Creating an oasis in the desert, a once impossible mission, has been accomplished.

"People call women like us desert roses. I hope our stories encourage more people to join the cause against desertification, and I hope we could become role models, to encourage other women to fulfill their dreams," added Otgonhuar.