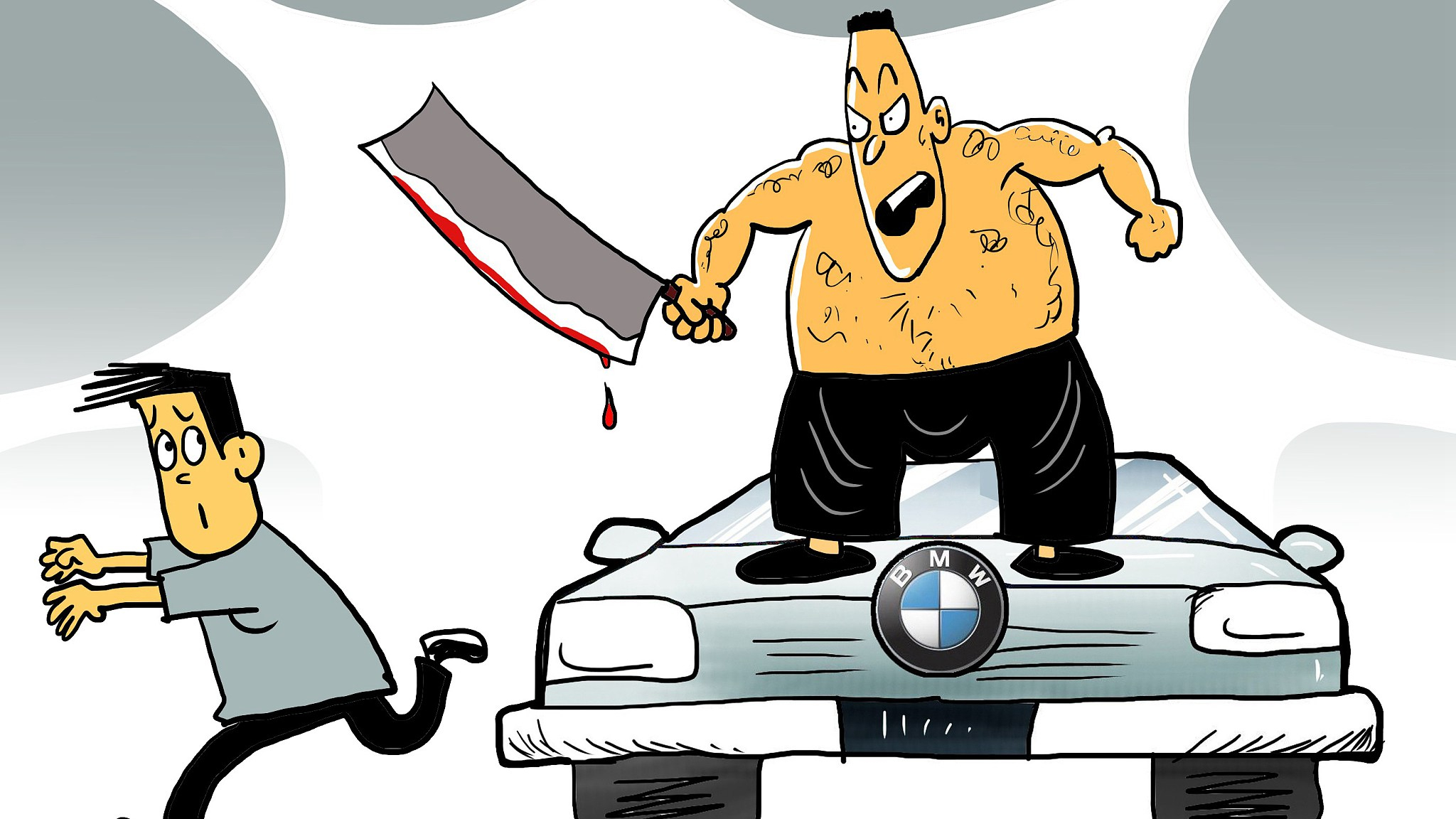 The man who stabbed a driver to death in a road rage incident in east China's Jiangsu Province was ruled to have a justifiable defense, the local police said in an announcement released late afternoon on Saturday. The attacker, Yu Haiming, has thus been exempted from criminal responsibility and the lawsuit has been dropped.

The traffic spat occurred between Yu and the victim Liu Haiming after their vehicles made a light collision Monday night in Kunshan City. The dispute escalated into a fight when Liu got a knife from his BMW and wielded it at Yu. Later, Yu made a counterattack after Liu accidentally dropped the weapon. He grabbed the knife instead and stabbed Liu to death.

As shown in a surveillance video, a black BMW sedan which Liu was driving made a sudden right turn at the crossing and entered the non-motorized vehicle lane at around 9:30 pm. The vehicle then collided with an e-bike.

Liu got out of his car, showing provoking actions including pushing over and kicking the e-bike rider Yu. He soon turned back to his car and grabbed a knife, trying to attack Yu. But Yu eluded.

After Liu accidentally dropped the weapon, Yu took it instead and stabbed Liu in the belly twice, making him fall to the ground. As Liu tried to get up, Yu attacked Liu three times more. Then, Yu chased Liu toward his car and slashed him twice again.

They were taken to the hospital after the police arrived, where Liu, 36, was soon announced dead.

According to the announcement by the police, Liu died due to hemorrhagic shock, directly caused by the five stabbing in seven seconds by Yu. The attack wounded the victim in the belly, chest, shoulder, elbow, and hip as well as three bone fractures. The last two slashes missed the target.

The incident has aroused a week-long intense debate in various circles and has been the most heated topic on China’s social media as to whether Yu’s fatal attack was justifiable self-defense or excessive self-defense.

In the meantime, the victim’s mysterious background also helped the story spread. Controversial rumors skewed public opinion. One said the victim was a gangster with a number of criminal records. It was challenged by another rumor which claimed that the victim was awarded as a Samaritan for giving clues to the local police on drug selling crimes.

As read in the announcement, the victim Liu Hailong was born in 1982 in northwest China's Gansu Province. He was not engaged in any gang activities, but he was jailed several times on charges of robbery, blackmail, and theft. He also did in fact hold a Samaritan certificate in March issued by the Jiangsu Justice and Courage Foundation for providing valuable clues to the police.

The announcement also listed out several highlights for making such ruling.

First, the fact that Liu upgraded his assault from physical attack to attack with a weapon could be seen as a life-threatened situation for Yu. Yu has the legitimate right to defense.

Another detail is that, after dropping his knife to the ground, Liu did not stop his behavior but try to retrieve the weapon, which indicated that his intention was to continue the attack.

Last but not least, Yu made his counterattack out of the purpose of self-defense. Though Yu continued several attacks after Liu fell, it was in attempt to prevent further revenge by Liu.

The ruling has attracted over 290,000 likes and 110,000 shares within four hours of it being posted on Weibo, winning wide applause from the public. As said by a commentator by China Daily, the case was a triumph of ruling by law.