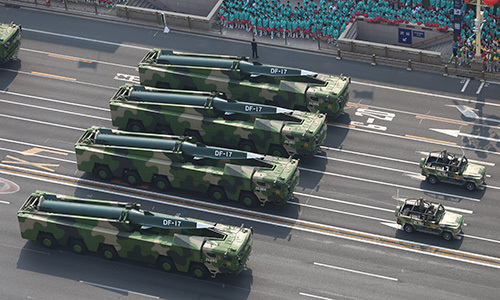 Making their debut in the general public for the first time, DF-17 missiles join the National Day parade held in Beijing on October 1, 2019. Photo: Fan Lingzhi/GT

The Chinese People's Liberation Army (PLA) has deployed its most advanced hypersonic missile, the DF-17, to the Chinese mainland's southeast coast near the island of Taiwan, Hong Kong media reported on Sunday, sparking fear on the island.  Although the reports are merely speculation, the PLA missile that is impossible to be intercepted can effectively deter Taiwan secessionists, control the Taiwan Straits and keep foreign interventions away, Chinese mainland analysts said on Sunday.

Citing an anonymous source, the Hong Kong-based South China Morning Post said on Sunday that the PLA has deployed DF-17 missiles to the area that would gradually replace the older DF-11 and DF-15 missiles, which have shorter ranges and less accuracy.

This report has aroused fear on the island of Taiwan, with media including the Taipei-based newspaper the Liberty Times reporting that the DF-17 could enable the PLA to directly attack Taiwan air force bases in Taitung and Hualien in the east of the island. Taiwan media also noted that the PLA has been deploying J-20 stealth fighter jets and Marine Corps units to the coastal region in preparation of a possible reunification-by-force operation.

Beijing-based military expert Wei Dongxu told the Global Times on Sunday that Hong Kong and Taiwan media have been paying close attention to the movements and development of the Chinese mainland's strategic weapons, but most of their reports are pure speculation. The DF-17s are highly mobile and information about their deployments is not available to the general public.

The DF-17 is a newly developed short- to medium-range hypersonic missile that was showcased at the National Day military parade on October 1, 2019 in Beijing for the first time. Thanks to its capability to change trajectory in mid-flight at a very high speed, the enemies have a minimal chance of intercepting it, Yang Chengjun, a Chinese mainland missile expert, told the Global Times at that time.

US air defense systems including THAAD, SM-3 and Patriot missiles deployed in South Korea, Japan, the island of Taiwan and on US warships will not work against the DF-17, experts said.

Wei said that if the DF-17 is forward-deployed near the Taiwan Straits, it can effectively control the region, deter Taiwan secessionists and keep foreign interventions away.

The PLA Rocket Force's older generation missiles are already sufficient to wipe out most of Taiwan's key military installations, and the island is not capable of intercepting them, so it is not necessary to use the DF-17 against the island's military, Chinese mainland experts said, noting that the DF-17 will play a more significant role in stopping forces from the US, Japan, South Korea, Australia and other locations, should they attempt to militarily interfere in China's internal affairs.

The PLA operates the DF-21D and DF-26 anti-ship ballistic missiles capable of sinking aircraft carriers. Taiwan media said that the DF-17 could also serve this purpose.