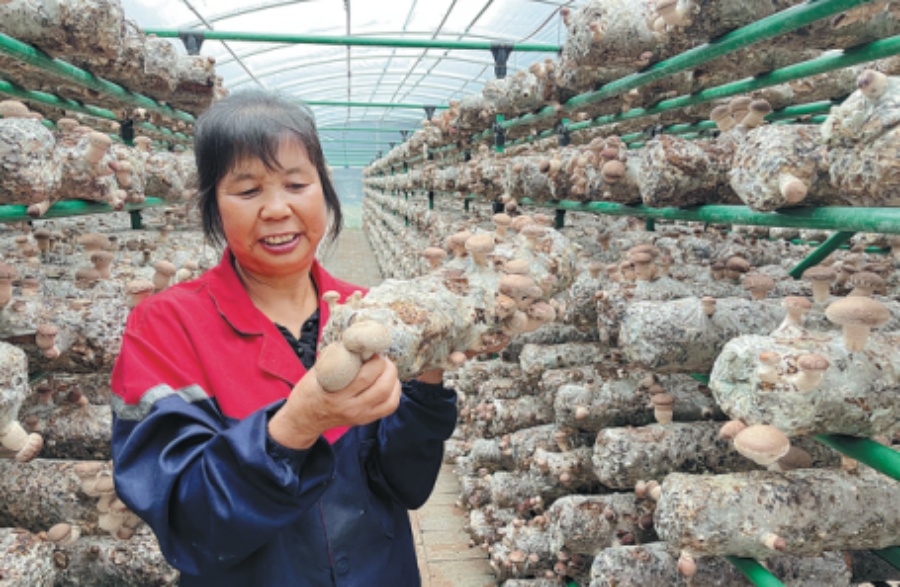 In Northwest China's Shaanxi province, famous for its rich coal resources, Miaowan, a township in Tongchuan city, is now better known as "Shiitake Mushroom Town" because the edible fungus business has transformed lives and society.

Such transformations are not limited to people. Even landscapes in the province are witness to enormous change. Where dust and exposed mines were a common sight, green mountains and verdant valleys are ubiquitous today in warmer days.

Wang Mingmei, a Miaowan farmer, epitomizes the ongoing change. Three years back, she was mired in poverty. Today, however, she does not mind light rain and appears enthusiastic and content while arranging shiitake mushrooms in neat stacks of rows at a greenhouse.

More than 500 such greenhouses dot the hillside that, not very long ago, was home to coal mines. Such has been the momentum of China's rural revitalization program that change is visible and inescapable in every nook and cranny of this region.

Where the national poverty alleviation program ended successfully, rural revitalization began in right earnest, bringing not just smiles and energy to people such as Wang but real prosperity and purpose to life.

That rural economic magic has been made possible by a modern agricultural technology demonstration base built in Miaowan three years ago.

When a group of reporters toured the mountainous, river-rich region, they got to witness scenes vastly different from history book images. Supported by the local government, ecological farming, which reduces impact of man on nature, has become a key industry here.

Wang said she is aware ecological farming is a better alternative as it protects soil, water and climate, promotes biodiversity, and does not contaminate the environment with chemical inputs.

She has Sun Xiaoshan, a local coal mine owner, to thank for such knowledge. About three years ago, Sun found that some households in a neighboring town called Liulin started planting shiitake mushrooms. They bought breeding sticks for edible fungus and grew shiitake mushrooms at home. The high-frequency harvests brought higher incomes to farmers who hitherto planted grain in the mountains.

So, Sun started up with Tongchuan Dexiang Industrial Co Ltd in September 2017 by investing more than 70 million yuan, after receiving 40 million yuan from a government-run fund. Over the last three years, the startup, which employs Wang among others, set up bases to grow shiitake mushrooms in Miaowan. The startup's annual income is now nearly 2.4 million yuan.

"I plan to build a new base to grow edible fungus this year and expand an existing one," said Sun, who is now targeting 200 million yuan in total revenue this year.

The government fund that financed Tongchuan Dexiang was set up for "rural revitalization", China's follow-up goal to an eight-year poverty alleviation campaign that helped eradicate absolute poverty and overall regional poverty in 2020. The rural revitalization strategy was announced by the country's leadership in 2017. 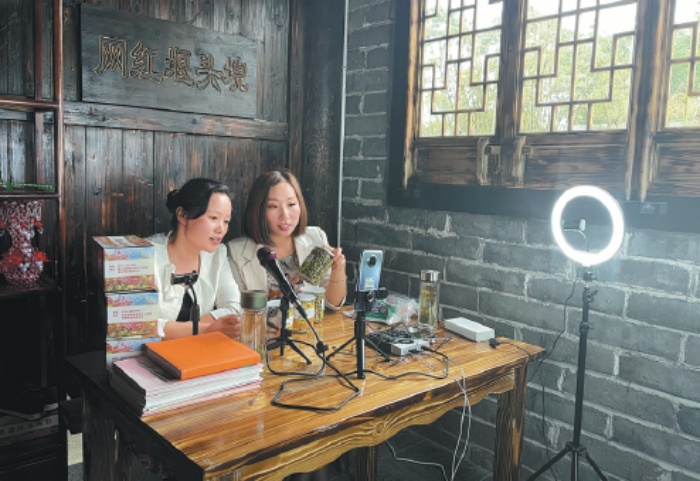 Local authorities in Shaanxi province have dispatched special work teams to implement the rural development plan. The Ministry of Finance announced the establishment of a special leading group and an office in the name of rural revitalization on May 12, to ensure that supportive funds can be delivered to thousands of villages in a timely manner.

In 2021, the central and provincial governments arranged subsidies of 10.86 billion yuan in annual fiscal budgets to promote the rural revitalization strategy, up by 3.58 percent from a year earlier, according to Li Minghuai, deputy director-general of the finance department of Shaanxi province.

The fiscal spending will remain stable to consolidate the poverty alleviation achievements and support the rural revitalization plan, which will give priority to the development of special industries having competitive advantages in underdeveloped areas, Li said.

From 2016 to 2020, the accumulated amount of special fiscal funds injected in poverty alleviation projects stood at 61.32 billion yuan in Shaanxi. The efforts mainly supported 56 poor counties to develop industries and facilitated investments in infrastructure construction, a local finance official said. "The idea is to ensure that the investment remains stable and constant."

The central government plans to allocate 156.1 billion yuan to the so-called rural revitalization assistance fund this year, which was formerly called the special poverty alleviation fund. If that comes to pass, the allocation will have increased by 10 billion yuan, or 7 percent, from the figure a year earlier, according to the Ministry of Finance.

The total expenditure in the national general public budget is projected to be over 25 trillion yuan this year, up 1.8 percent year-on-year, the ministry indicated in the annual budgetary report in March.

The fiscal funds, which will be used to consolidate and expand progress in poverty alleviation with rural revitalization, will focus on the areas that are less developed and have heavy tasks in achieving the goals, the ministry said on May 21.

Of the total spend, 239.45 billion yuan is for supporting high-quality agricultural development and to increase income of farmers, it said.

China's authorities have identified a five-year period, starting from 2021, as a transition between the two drives－from poverty alleviation to rural revitalization. And during the period, the government will continually spend huge money to promote industries with competitive advantages in underdeveloped regions, planning to increase the spending year by year.

Experts said some anti-poverty plans, although they have finished, will need additional funds to consolidate the results, such as driving urbanization through resettlement, providing job opportunities to poor people, improving living environment in villages and constructing public infrastructure.

The country's financial policies will take effect to prevent people from falling back into poverty, which needs a special arrangement as part of the budgetary spending of about 2.2 billion yuan, according to the finance ministry.

"In the first three years of the transitional period, counties that have recently been lifted out of poverty will be allowed to integrate and coordinate the use of government funds for rural development," said the nation's annual budget report, adding that policies will support the growth of village collective economies and strengthen funding safeguards for the operations of village-level organizations.

In the first quarter, the 18.3 percent year-on-year growth in China's GDP, which was above the pre-pandemic level, came on an unprecedentedly low statistical base due to the COVID-19 pandemic.