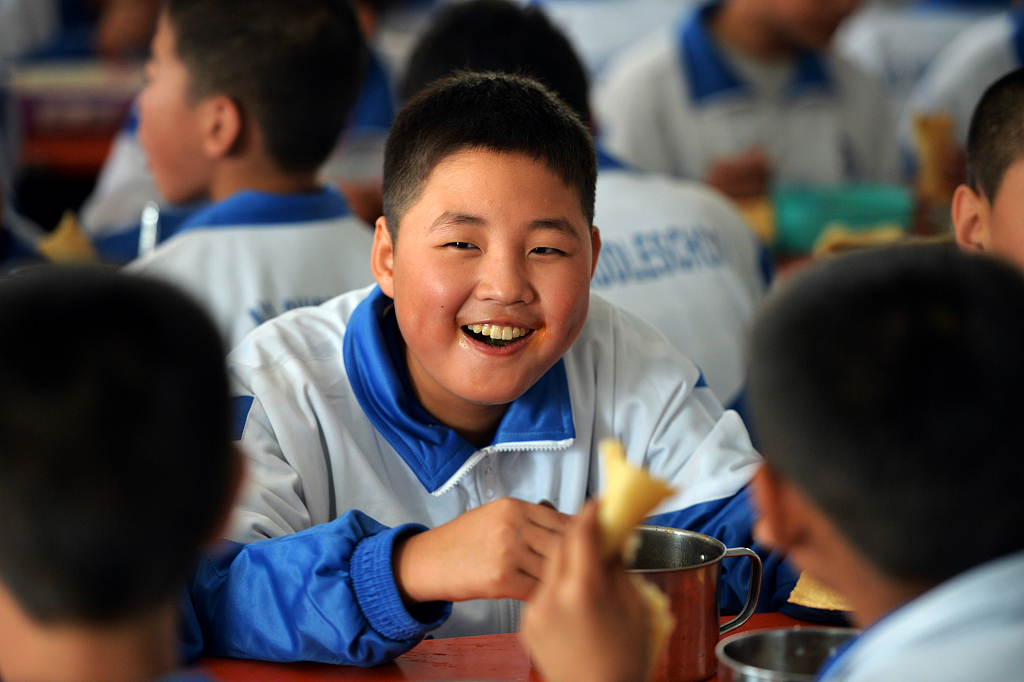 It came as a surprise to Luo Chuancheng, a 15-year-old middle school student, that a basketball court would be completed in his village in just a few days.

Luo lives in a mountainous village called Piaozhai, in Qiandongnan Miao and Dong autonomous prefecture, southwest China's Guizhou province. He attends school in a town which is about a 20-minute drive from his village.

"I love playing basketball. Every time I went back to my village at the weekend or on holiday, I just hoped there would be a basketball court," Luo said, adding that his village was devoid of a basketball court for almost four years.

The village actually had one court, which belonged to the village's only primary school. But the court was not always open to the public and as it was getting old, it was abandoned for the safety of the students.

"We always wanted to build a new court, but had to give up just because we did not get funds and there was no open space," said Wu Shike, the village party secretary.

He emphasized that this year, with the support of the provincial sports bureau and the local governments, they finally tore down a collective barn and made room for the construction of the new court in August.

"The construction will be totally finished once we install a pair of basketball stands and two Pingpong tables," Wu added.

The village has a population of 2,121 residents, most of whom are from the Dong ethnic group, and they love recreational and sports activities such as singing, dancing and playing musical instruments.

Luo's mother, Chen Juhua, aged 51, is fond of square dance, and she has danced with other women in their house for more than 10 years.

"Over the past years we always wanted to take to the outside, but we just couldn't as there was no more open space. And now we can dance on the court by taking turns with the basketball fans," said Chen, with a smile on her face.

China initiated a rural resident body-building project in 2006, which was aimed at helping every administrative village build and install sports facilities, mainly including a basketball court and two Pingpong tables, for the rural residents to do exercise.

Jing Qiwei, director of the office of the provincial sports bureau for mass sports, said that by the end of 2019, Guizhou has helped more than ninety percent of its administrative villages, a total of 13,558, finish the work.

"Guizhou is determined to achieve full coverage of the project over all its administrative villages by the end of 2020," Jing said.

He added that as the living standards of the rural residents have improved along with China's economic development in recent years, their demands for sports facilities also increased, from which they benefited a lot.

Anshun city, located in the center of Guizhou, has so far fulfilled the complete coverage of the project over its whole 909 administrative villages, which has helped tens of thousands of rural residents live a healthy and happy life.

With a population of 1,353 residents, Shangtoupu village finished the installation of a pair of basketball stands and two Pingpong tables on its basketball court in 2019.

Wu Zezhong, the village party secretary, said that the residents have garnered joy from participating in recreational and sports activities held in the court ever since.

"The residents spontaneously established square dances, local drum dances and local opera teams, and many of them also have formed a habit of playing basketball and Pingpong," Wu said.

He explained that as the per capita net income of the village's residents rose from around 4,000 yuan (about 600 U.S. dollars) in 2015 to more than 9,000 yuan in 2019, the residents are getting more and more interested in sports activities.

"When the residents were poor, they only cared about making a living. But when their lives improved, they turned their eyes on recreational and sports activities," Wu added.