Rural tourism has taken the lead in resuming tourist operations 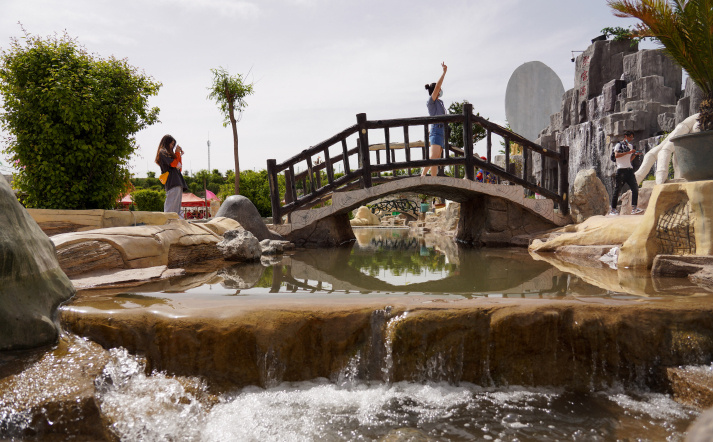 Since resuming business on April 12, Zhu Yanjie's guesthouse has become a popular destination for tourists and is fully booked through the end of August. Located in Zhujiagou Village of Kangxian County in Gansu Province in northwestern China, the guesthouse combining rustic beauty and modern design has become a popular local brand.

The inconveniences caused by the novel coronavirus disease (COVID-19), including body temperature readings and health information updates at the guesthouse each day have not hindered tourists. Every morning, Zhu sanitizes the rooms and courtyards of the guesthouse.

He and his wife returned to the village in 2017 after working in cities for years. "When I was away from the village, I always missed it a lot, the brooks, the old trees and even the smell of cooking, from when I was a little boy," Zhu said.

The beautiful village in Zhu's childhood memory, however, has long been listed as a poverty-stricken village in the province and in 2013, more than 25 percent of its residents were still living under the poverty line.

Things started to change in 2016 when the government released policies to boost rural tourism. Seeing the potential in rural development, Zhu and his wife returned to their hometown. They rented several old houses from neighbors and renovated them into guesthouses, keeping many original elements in the design such as the millstone in the courtyard.

Upgraded infrastructure in the village, including paved roads, has also made it more attractive to tourists. "Now tourism has become a major source of income for the village," Zhu said. On July 9, the village appeared on the newly released list of key villages for promoting rural tourism by China's Ministry of Culture and Tourism (MCT). Altogether, 680 villages from all provinces, municipalities and autonomous regions appear on the list, the second of its kind released by the MCT.

In 2019, 320 villages were selected for the first list, with the MCT criteria being that a village must be "rich in cultural and tourism resources, with sound protection and conservation of rural traditional culture as well as mature and high-quality tourism products."

The MCT will provide support for further tourism development in the selected villages, including support in infrastructure, public service facilities and market promotion. In addition, local authorities, via various funds and channels, will support the tourism industry in these villages.

Since late April, after the epidemic was largely contained in many areas of the country, tourism has gradually resumed, with rural tourism leading the way.

The Gansu Department of Culture and Tourism stated that rural tourism in the province experienced a boom during the May Day holiday, with a total of 1.48 million tourists generating 390 million yuan ($55.8 million) in income during the five-day holiday. Among the tourists, 62 percent stayed in villages overnight, a 5-percent increase from the same period last year.

Meanwhile, many provinces have launched various supportive measures to boost rural tourism. For instance, Jiangxi Province in east China released a series of measures, including offering ticket discounts and giving employees 2.5 days off per week to encourage them to go to suburban villages for leisure. Among 850 rural tourism destinations in the province, about 830 had resumed operation as of July 7, attracting nearly 70,000 local residents to work in the industry.

Nationwide, about 90 percent of the rural tourism industry had resumed business as of July 7. In addition, though the epidemic has largely hindered long distance travel, short trips to suburban villages have revived.

The MCT has released about 300 village travel routes nationwide, with each stringing several villages together. Some feature guesthouses and local cuisines, while others highlight historic relics or leisure and sightseeing spots.

Zhejiang Province in east China is among the first batch of provinces that developed guesthouses in the country. Chen Gu, a 49-year-old designer, is now the chief designer of a cluster of guesthouses in his hometown of Hengshanwu Village, which is on the new MCT list.

"Villages have inherent advantages compared to cities," Chen said. "Tourists in villages prefer to have non-standardized experiences. Each of the guesthouses has a different theme. We are not only transforming old houses into guesthouses, but also the whole village into an emerging travel destination."

Furthermore, rural tourism has played a key role in China's poverty alleviation campaign, according to the MCT. Some remote villages boast fantastic natural scenery, which make them attractive.

Liu Bingchu, a travel guide specializing in exploring unique travel routes, has traveled to many places in southwest China including Yunnan and Guizhou provinces. Subsequently, he designed several routes to villages featuring the cultural heritage of minority ethnic groups.

While making efforts to retain their original look, villages are also promoting their image in new ways. Zurong Village, the southernmost village in Guangdong Province in south China, has become famous for being the frontline of dialect art and has attracted many avant-garde artists. In 2016, it held China's first Dialect Film Festival, which has become an annual event in the village. "Villages are where the dialects survive," Qin Xiaoyu, a documentary director, said.

"China's rural tourism has a lot to explore and we are just tapping a small portion of it," Liu told Beijing Review. He added that in recent years, a growing number of tourists prefer villages to scenic spots in urban areas as a retreat from the fast-paced city life.

Li Yipeng, a researcher at Sichuan University, offered a unique insight into the rural tourism boom. "When China adopted its reform and opening-up policy in 1978, there were only 170 million people living in urban areas. By 2019, this number had skyrocketed to almost 850 million, with most migrating from villages to cities," he explained. The group of people who spent their childhood in villages and adulthood in cities are nostalgic about the rural life and go back to find their roots. They account for a large portion of rural tourism fans, he said.